Enter The Weird World Of Angel Barta, The Woman Who Is Stalking Marc Jacobs Online

Meet Angel Barta: she’s a pretty young Hungarian woman living in Paris who writes a blog called Style Angelique. This is the introductory paragraph of her blog:

I am Angel Barta, writer and fashion designer. Marc Jacobs has been stalking me and using my ideas without my permission for 5 years.

Angel goes onto explain that she had a “love romance” with Jacobs (who has thus far only publicly come out as gay) and that their deep relationship was one of creator and muse. She has posted multiple photos of herself alongside Jacobs’ campaign images, and says that Jacobs has been stealing everything from her — and has seemingly devoted her life to spreading the anti-Marc gospel. She regularly peppers fashion sites with links to her blog, attempting to lure people to her sad tale via the comments section of different blogs. We discovered her after she posted a link to her blog on another article.

Muses–and even secret muses–are nothing new in fashion, whether it’s Marion Cotillard for Dior, or Loulou de la Falaise for St. Laurent. Some have been famous — like Ciara for Givenchy — while others have been largely out of the spotlight. Angel Barta says she met Jacobs when she was a young Hungarian model and that Jacobs fell instantly in love with her. 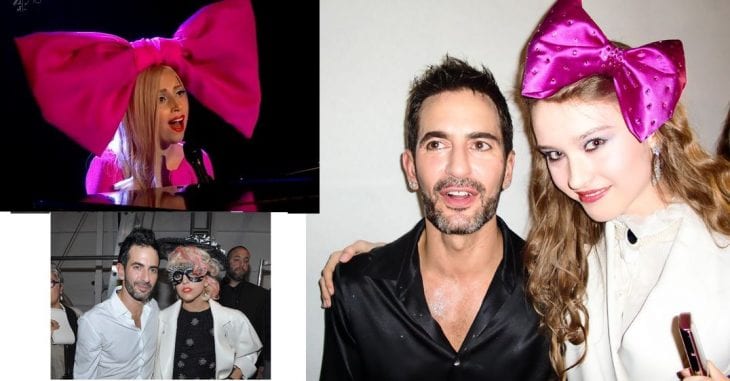 And to be fair, there is actual proof that Jacobs and Angel knew each other. Take the photo above. And the 2008 New Yorker profile on Jacobs in which Angel is actually mentioned, albeit not too flatteringly:

Jacobs’s assistant came in and told him that Angel was there to see him. People looked at one another in a funny way. A few moments later, a very beautiful, very tall young woman wearing an enormous hat made of feathers, many strands of pearls, a four-tiered black lace skirt, and hot-pink satin high-heeled shoes came into the room. “I bring something for you!” she said triumphantly, and thrust a bottle labelled “Tokaji aszú” at Jacobs.

Angel was led away to change into a dress. “That’s a girl who goes to my gym and she wants to be a model,” Jacobs said, “so I told her she could come by and I’d take her measurements. You should see what she wears to the gym—you know, outfits. Spandex and stretch tulle.”

Angel came back and Jacobs asked her to show him her walk. She marched down the hallway in a dramatic fashion. “Perfect,” Jacobs said.

“Yeah,” Jacobs told her. “That’s it. Come spend a few minutes with me and then I have to get back to work.” He led her into his office, which is wallpapered with pictures of pills on a brown background (a gift from Damien Hirst), and closed the door.

“That’s a particular case,” Ludden said. “She’s really invaded his personal space.” [Aisling] Ludden smiled. “That’s very Marc—he’s definitely always got one eye on the underdog. If there’s a bunch of people in a room, Marc will pay attention to the sadster.”

Jacobs gave Angel a good fifteen minutes, returned, and lighted a cigarette. “Every girl in the world wants to be a model.”

“Was that outfit a joke?” Ludden asked. “Like, is this a reality-TV-show trick, do you think?”

Jacobs laughed. “If you think that was weird, you should’ve been in there,” he said, exhaling smoke in the direction of his office.

And then it gets really, really weird. Barta posted a whole catalog of images on her site, each with seasonal dates on them, claiming that Jacobs copied her look and style to a T. But there’s no real way of knowing which came first — the Jacobs ad or the Barta photo. Not to mention, most of the images are rather benign — and anyone could have pulled off the poses and looks.

Plus, there’s the book. Oh yes, Barta’s written a book on Jacobs, titled The Secret Love Affair in Paris,and provides an excerpt on her website. It reads like sexually graphic fanfic. You want a sample, don’t you?

Marc: Since you are my muse, creating is really easy. I am the new Picasso! I am a man with a hand and a brain. You are the only thing in my mind and it’s really good for my job. You’re a unique girl, Angel, really honest, modest, pure, and sweet. I love being with you. The best part of my day is always when I chat with you. Every day, when I wake up, you’re my first thought…your body, your kiss, your soul.. at night, before I fall asleep, I think of you… then I dream about you, my muse…

Jacobs is openly gay and had a longtime relationship with Lorenzo Martone before the couple broke up and he landed with Harry Louis.

Barta inexplicably links her fallout with Jacobs to his work with stylist and Love magazine founder Katie Grand, who she claims has been “a soul terror against me.” And, she says, Jacobs’ far-reaching influence in the fashion world means that her muse-ness (sorry, I know, not a word) has been leveraged at brands like Dior, Nina Ricci and Givenchy. Plus, she says she’s the reason for the explosion of Hungarian models in the fashion world now–girls like Barbara Palvin, Enikő Mihalik and Réka Ebergényi. (You didn’t know there was a Hungarian model explosion, did you?). She goes on and on, detailing the massive conspiracy against her, without ever explaining why Jacobs and a slew of fashion bigwigs would bother to collude around one relatively unknown Hungarian woman, but steadfast in her assertion that Jacobs is definitely plotting against her.

By now I think we’re all in agreement that this person has some pretty wild delusions, yes? It’s easy to fall down the rabbit hole and see this whole thing as just an out of control narcissist, but it’s actually really sad.  I’m certainly not wishing to poke fun at a person with mental health issues; but I’m troubled and fascinated by someone who could create such a fantasy world around a designer–one in which their success and acclaim is directly attributed to her. And I am certainly no mental health professional, but I would hope that someone close to this woman would urge her to seek help for her delusions. And I also hope that she is staying far, far away from Marc Jacobs, or anybody associated with him. The obsession is obviously unhealthy. [Style Angelique]

The Ultimate Guide to Oneitis, How to Cure...