10 Signs You’ve Settled In To Your New City

This week marks the year anniversary of my big move to Nashville. I can’t believe it’s already been a year. On the one hand, it feels like I’ve been here forever, and on the other, it feels like about 2 weeks has passed since we sold all our stuff and set off on our cross-country road trip. I was talking to an acquaintance at a party the other night when I stopped abruptly after referring to myself as “new in town” — “Wait,” I said, “do I still get to call myself a newbie after a year?” Answers varied, but one thing I’ve realized about relocating to a new city is that the settling-in process is less about a certain amount of time passing and more about the milestones you reach along the way. Hitting the 3-month mark in a new zip code is decidedly less exciting than finally tracking down a new hairstylist you trust with your highlights, for example. Here are 10 signs that you’ve finally settled in to your new home:

The hardest thing about moving to a new place, especially when you don’t know anyone, is dealing with the loneliness, and feeling like an outsider. Slowly but surely though, as you meet people and put yourself out there, you’re going to find “your people.” For you, “your people” might be vegan rollerderby girls, or libertarian Passion Pit fans, or feminist jewelry designers, or Mini Cooper-driving pug enthusiasts. Depending on how specific or rare “your people” are, it might take a while to find them, but trust me: one day, after many unreturned text messages and countless awkward coffee dates, you’re going to look around at the motley crew of buddies you’ve assembled in your new(ish) city, and realize you’ve found them. 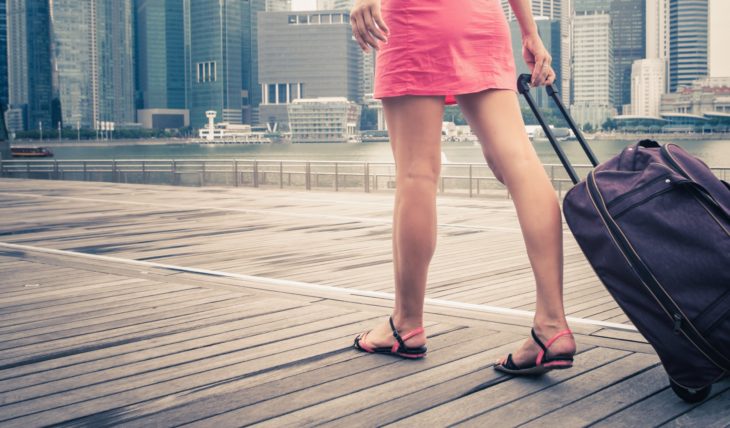 I am obsessed with Nashville to, like, an unhealthy degree, and can happily rave about how magical and wonderful it is for hours. But after a year here, enough of the shiny newness has worn off to allow me to complain about some of the downfalls of my beloved city: the shockingly large insects, the belligerent frat boys of midtown, and the traffic — sweet mother of God, the traffic. When you find yourself grumbling like a local, it’s a surefire sign you’ve made yourself comfortable somewhere.

3. You have at least one super close friend

When Ami and I were talking about making friends in a new city, she said something that really resonated with me: “You’ll always have your lifelong BFF that you keep in touch with wherever you go, but you also need to find a best friend in whatever city you’re living in right now.” So far, I feel like I’ve found a pretty rad gang of ladies to hang out with, but I’ve yet to discover a Nashville-based BFF. Any takers?

4. You’ve found a hairstylist you love

Perhaps even more important than finding a best friend in your new city is finding a hairstylist you trust with your hair. The trial and error process for finding your hair salon soul mate will be difficult, heart-wrenching, and result in many bad haircuts, chunky highlights, and split ends, but when you find The One? Oh girl, you’ve got it made.

Obviously your hairstylist is the most important service provider you need to line up after relocating (because moving to a new place is stressful enough without a bad haircut), but there are also doctors, plumbers, accountants, insurance agents, tailors, computer repair techs, and mechanics to track down. Slowly but surely, you’ll replace your important phone contacts with new names and area codes, which can be awesome or bittersweet, depending on how attached you were to your old gynecologist.

6. You have a default hangout spot that you visit way too much

You know how when you’re planning a night out with friends, you always consider going to a hip new spot or trying something new, but ultimately sigh and say, “Let’s just go to [that place we always go]”? It might not be the best restaurant or the friendliest bar (in fact, often it’s a total dive), but for some reason it’s the one you go to again and again. Once you’ve got your own personal Cheers or Monk’s, where the staff knows you and where you spend approximately 60% of your time and disposable income, you’re well on your way to becoming a jaded local.

7. You’ve started to dress the part

When you move to a new place, a change of style is pretty much inevitable. Thanks to a different climate, new culture, or the urge to shed all superficial evidence of your old self (or all of the above), at some point after you move, you’re going to look at all the clothes you brought with you and say, “No, no, no, this doesn’t work at all.” The new clothes you buy are going to reflect the city you live in and the aesthetic of the people there. When I lived in DC, I stocked up on conservative separates. In Hawaii, my bathing suits outnumbered my underwear. Since moving to Nashville, my collection of cutoffs, floral sundresses, and boots have increased tenfold. Visiting a city and living in a city are obviously two very different things, but the first few months of living somewhere often feels like a strange amalgam of both. You might get your home internet service set up on the same day you go sightseeing at a crowded tourist trap, or find yourself answering the question of “Do you live here?” with “Um…kinda?” There’s a turning point, though, where your interests and pastimes shift, and the places you would be drawn to as a tourist no longer hold the same appeal.

9. You’ve picked up the local slang and/or dropped your old lingo

I have yet to say “y’all” with the nonchalance of a real southerner (I usually end up kind of yelling it self-consciously and then hating myself), but I do feel like some of my favorite west coast words have fallen out of my daily vocabulary, and been replaced with more regional slang. My favorite saying so far? “He’s crazier than a sprayed roach!”

10. People ask you for directions

There is a quick but extensive nonverbal checklist that people use to decide if they should ask someone for directions: Does this person look like they live here? Do they seem friendly? Do they look comfortable in their surroundings and seem to know where they’re going? Every time someone asks you for directions, it means you’ve passed all those tests. When people start asking you for directions on the regular — and not only that, but you actually know the answers to their questions, maybe with a secret shortcut or two thrown in — pat yourself on the back, because you just became a local.

Do You Have a Warm Or Cool Skin Tone? Here’s How To Find Out Once and For All

Girl Talk: You Can Run Away From Some Problems