Girl Talk: I Had To Move Overseas To Find Love

Three years ago, off the back of a bad relationship, I needed out of Southern California and decided to move to London for six months. I was looking forward to being single for the first time in five years and was relishing the chance to dance, date and drink in a massive, heaving city. I would kick up my heels in swanky clubs, live in a Tudor cottage and date a man who wore a bowler hat and carried an umbrella.

Three weeks later, I opened the front door to find my roommate’s brother, Mark, standing there with a bag in one hand, a bicycle in the other. He had just left his wife and three children and needed a place to stay.

He had baggage so big and heavy that most airlines would have charged a lot for him to check it. He was 10 years my senior. But no matter how hard I tried to escape Mark, he always managed to corner me beautifully. One morning he chased me down the streets of South London and pulled me onto a southbound train. We spent the next two days together, him showing me the ropes of his city. 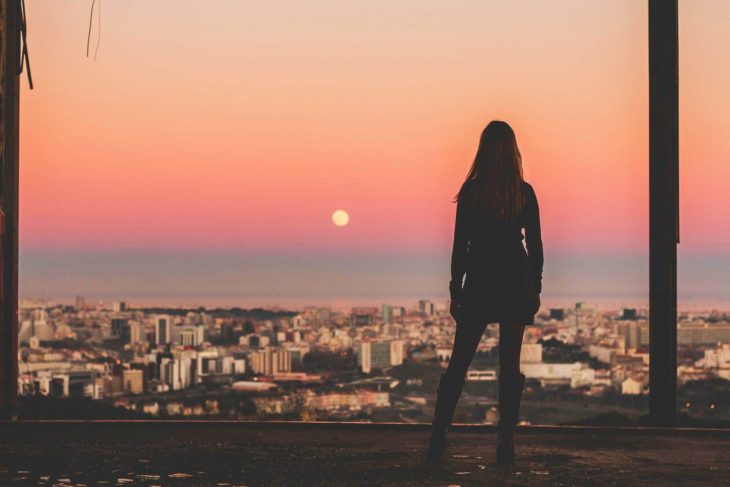 When I was a teenager, I desperately wanted to fall in love. I’d tumbled in and out of relationships, yet never fully fell into one. Here I was in my late 20s and I desperately wanted my freedom. And I was falling into a mad cocoon that hadn’t existed for me until I opened a door in London and a man with an accent began to pull it from deep inside of me.

We’re still together and I love him unreservedly. We couldn’t be more different, yet somehow we mesh perfectly.

I don’t understand the inner workings of a heart that took so many years to surrender to the pain of being truly in love. I’d said “I love you” thousands of times before, my heart turning the phrase over and over while my mind found endless flaws in the person I was ultimately lying to. I had lived cold-blooded beneath the heat of the California sun until it faded into the chill of May in London, which feels more like autumn than spring. Perhaps I am now warm-blooded?

Mark makes me cry more than anyone else, yet our time together hasn’t faded what I feel; I’ll forgive him any sin. The two and a half years we’ve spent together have been the hardest I’ve experienced. In the beginning, we endured daily harassment by Mark’s ex-wife. One morning she tricked someone in our building into letting her in: She knocked on our door for what seemed like hours, denting the wood and scratching the brass knocker before forcing her umbrella through the mail slot and knocking a mirror off the wall, filling the hallway with shattered glass. Another day, I hid for an hour in a wine shop while the blue snout of a Peugeot quested ominously up and down the street, seeking me out, though what she would have done had she found me eludes us both I think. In those early days, we had less than $10 to our name most of the time due to his exorbitant legal fees as well as the high cost of life in London.

In spite of all this, Mark and I have managed to keep love alive: Sometimes I come home from work to find our bedroom filled with freshly picked roses, their heavy, vintage scent spilling over the bed linen and staining the note he’s left on my pillow.

I’ve never been a superstitious person: Fate and other like ideologies have always struck me as silly and weak. Now I feel as though I’m constantly on the run from the sharp sting of karma: afraid that what I have done to Mark’s ex-wife and children will, in turn, be done to me. It is because of this that I occasionally accuse Mark of having affairs or doubt his affection, all the games women play when love comes too close to the heart and threatens to overtake. I look at him and love him, no matter how hard my life becomes because of his involvement in it. The more that I know of him, the more deeply my feelings engage, locking me in, no matter how hard I try to talk myself free.

Sex Positions That Will Help You Get Pregnant

How To Deal With Your (Crazy) College Roommate