I’ve been off and on various online dating sites for, oh, four years now. By far, the stupidest part of online dating is the utter futility of most of the things one could say about oneself and how unimportant they can be. For instance, I’m a brunette who loves to read and has a sweet tooth. Same goes for probably three million other single women. Even personality qualities — loyal and generous, demanding and impatient — don’t mean much until you’re in the thick of it with someone. I’ve resigned myself to the fact that most guys probably check out my photos to see if I’m hot, scan my profile to see if I sound crazy, and if I pass both checkpoints, they message me something like, “hey u whatz up babe.” (And then I delete them.) In other words, it probably doesn’t matter to the majority of men if I say I’m a brunette or my hair is highlighted, or any of a number of other things, so long as I’m not obviously a psycho troll.

But there’s one thing personality trait, if you will, that I’ve advertised because I really do think it is important and I do want men to know about it. And perhaps unsurprisingly, it attracts a fair amount of attention from guys: I tell them that I’m kinky.

There are guys … who seem to think that just because I address my sex life and my sexuality in my profile that must mean I’m going to be a super-sexually charged sex-o-nymph who is trolling online dating sites looking for no-strings-attached sex.

While I would never compare the disadvantages and discrimination faced by those who are LGBT to those who are kinky, they both don’t have the luxury of just going to the local bar and scoping out some attractive warm bodies. It’s a little trickier to find what you want if you are LGBT or kinky, especially if a community (which can be a lot of things) doesn’t exist for you. And one thing I have learned in recent years based on both my own experience and the experiences of kinky guys I know is that a “vanilla” person and a “kinky” person are just as doomed in a relationship as a lesbian married to the straightest straight girl. The vanillas want it vanilla, the kinksters want it kinky, and at the end of the day, people want the sex that they want. While there’s obviously room for concessions — say, a couple with an “open marriage” in which the kinky partner is allowed to pursue his or her kink with other people — I personally don’t know of any relationships like that. What I do know, however, are plenty of kinky guys and gals who’ve fallen in love with lovely vanilla individuals, stayed together sometimes for years, and eventually broke up because neither party was pleased by their sex life.

So, now can you understand why I make it clear in my online dating profile that I like a little somethin’-somethin’ that’s not on the usual menu? I’ve dated a great many men in my relatively short life and I’m tired of getting half-naked under the covers with a guy only to find out he won’t spank me, restrain me, talk dirty to me, or any of a number of other things that blow my skirt up, so to speak.

It’s not a big deal. I disclose that intimate detail about myself the same way that I disclosed my shiksa status when I was on JDate: here’s this thing about me, make sure you know about it before you message me. I see full disclosure of this sort as “the right thing to do.” There are some guys who probably read that line while scanning my profile and click away immediately because they know they can’t ride that horse. That’s fine; that’s what it’s there for. There are other guys — many other guys, I’m pleased to report — who say, “Thank you for being so upfront about being kinky! I wish more women were like you!”

But then there are the guys — both ones I’ve chatted with online or actually gone on dates with — who seem to think that just because I address my sex life and my sexuality in my profile that must mean I’m going to be a super-sexually charged sex-o-nymph who is trolling online dating sites looking for no-strings-attached sex. Attention, fools: just because I’m kinky, doesn’t mean I’m easy. 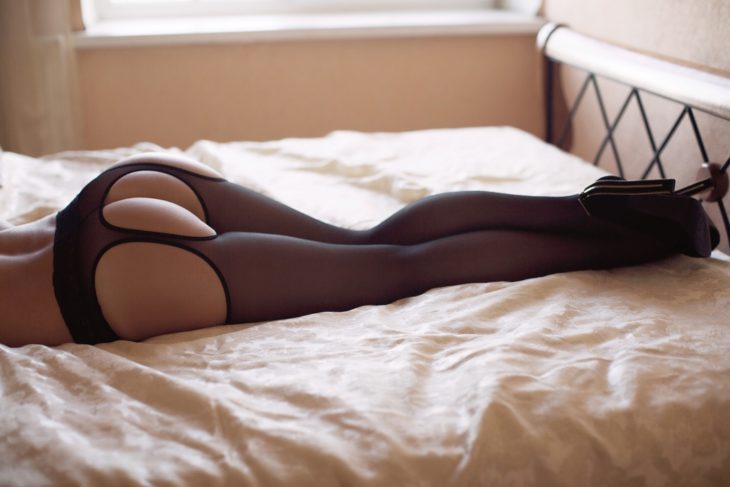 Regardless of the specific site, some guys just troll online dating sites for sex: I’m aware of that from the various online dating sites that I’ve belonged to over the years. (I can’t speak to how women behave in this regard. Care to enlighten us, boys/lesbians?) Even though it really shouldn’t surprise me anymore, the number of guys who say something like, “Hey, you’re pretty, I’m a fan of ‘30 Rock,’ too, I’m not really looking for a relationship but would you want to meet up for sex?” continues to shock me. Whether this strategy actually works for them, I don’t know. (I would assume that women would feel safer meeting a guy at a bar and going home with him, rather than being approached by someone who is basically anonymous online.) Yet the one thing we know about men — amirite, ladies? — it that if they’re really dedicated to the pursuit of p**sy they will use any means possible, including ones that don’t actually work. (To be clear, I explicitly say in my profile that I’m looking for serious dating only and would like to find love. If you actually read my profile, there is no ambiguity whatsoever about who/what I’m looking for.) I acknowledge the fact that a certain amount of messages are going to be from these kinds of dudes.

Ever since I started saying in my profile that I’m kinky, though, I’m noticing that more guys lead with sexual banter, questions about my sex life, and outright inappropriate comments sooner. Now, I’m not prude. I love to flirt and I have a decent sense of humor where a naughty joke is concerned. But I don’t know why so many men assume that they should approach online dating “courtship” — if you could even call it that — so casually. The first time you message me and share that you, too, love “30 Rock” is not the time to ask me what it is I’m kinky about in bed. Seriously, guys? You don’t even know what my last name is yet and you’re asking me about my intimate sexual preferences? Would you do that with a girl who didn’t define herself as kinky?

The few dates I’ve gone on off of online dating haven’t been paragons of courtship, either. They started out “vanilla” enough, but soon went off the rails into sex talk that made me super-uncomfy. I take full responsibility for reciprocating the sexy banter with the first guy, with whom I dirty emailed, dirty IMed and dirty texted even before the first date. (He was the first guy I went out with after a hugely upsetting breakup with my long-term boyfriend, so my head was not screwed on particularly straight.) I wish both of us had controlled ourselves a little better because we kind of flamed out too soon by getting intimate too quickly; the sooner you start getting into people’s intimate sexual details, the sooner you find things that make you go, “Um … no.” The first guy and I probably would have had more fun over a longer period of time had we not rushed into things.

The second dude I went on a date with also got way too creepy way too fast. We had only had one date with each other but the text messages and IMs he was sending me skeeved me out. He seemed to think that having sex with me was a foregone conclusion when it wasn’t. While he was a fundamentally nice guy, the sexual comments he was making to me sent off “Creep! Creep! Creep!” vibes that I couldn’t ignore and were making me uncomfortable. I’m looking for more serious dating these days — not easy, no-strings-attached sex — and I can’t help but think both of these dudes were so titillated by my admission of kinkiness that they didn’t know how to handle that.

I realize that many guys are just curious (and excited down in their pants) and not creepsters. But during a first or second email exchange — hell, before or after a first date — no one really knows whether the other person is creepy or psycho or not. You. Just. Don’t. I’m sure there have been some perfectly nice guys who’ve messaged me via online dating who unintentionally creeped me out by talking about sex too soon. While Occam’s razor would tell us that most guys just assume that because I brought it up, I must be really comfortable talking about it, the fact remains that I want to feel a sense of courtship, not the sense that a dude is getting sexually titillated by emails or messages. While Patti Stanger from “Millionaire Matchmaker” is probably correct that “the penis does the picking,” she also smacks two strangers upside the head if they sprint into sexual banter, sexual touching, and, of course, sex.

I know I’m asking for what seems like a lot: I want to date a traditional guy and go on traditional dates, but I also want him to be kinky. I don’t think, however, that this request is impossible. All I request is that dudes don’t f**k it up by getting too casual, too sexual, or too personal too soon. I promise I’m kinky. And I promise we’ll get there.

But other than my somewhat outré sexual practices in bed, I’m just a regular girl and I want to be treated like one.

13 Of Your Easy, Fuss-Free Exercise Tips