Last night, I was lucky enough to have, literally, a front row seat to a concert by the jazz group Jon Batiste and Stay Human. I’m not sure how that happened to little old me, but I’m sure glad it did.  The concert was amaaaaazing and it was being filmed for PBS, so you’ll all get to enjoy it sometime soon.

Supposedly there were a couple celebrities in attendance, but the only one I recognized was the hip hop/R&B singer Eve. She’s so stunningly gorgeous in person that it was hard to miss her — especially because she was sitting at the next table. When it came time to leave the venue, my boyfriend, Eve, her handler/PR person/friend, and I shuffled to the elevator at the same time. But the elevator was broken, or something, so we all ended up standing squeezed in close quarters for about 10 minutes. Than, randomly, my boyfriend, who likes to tease me, said rather loudly, “ARE YOU NERVOUS STANDING NEXT TO EVE?!”

“Shut up!” I whisper-hissed. “Just shut up!”  We all stood there awkwardly, and then a minute later, Eve and her friend moved to another part of the hallway. I rolled my eyes at my dude … and then felt totally awkward when all of us were smooshed inside the elevator together.  When we finally got outside (where she and her six-inch stilettos were safely deposited into a waiting car), I explained that the first rule of being in close proximity to a celebrity is not to talk about them as if the person standing next to you can’t hear you. That was very smooth, honey!

So in honor of my dude (who, in fairness, is from the land Down Under where they do not have as many celebrities, I guess), here are just a few tips on how not to be awkward if you interact with celebrities “in real life.”

1. For the love of God, do not take photos.  Look, if Beyoncé and Blue Ivy wandered into Baskin-Robbins at the same time as me, I would be dyyyying to Instagram that shit. But you’re not a paparazzo, they’re not on the red carpet, and it’s rude and weird to try and photograph or film someone surreptitiously.  Yeah, you could maybe sell a pic of Beyoncé snarfing some Lunar Cheesecake ice cream  to TMZ and pay your rent next month. But you would also be treating a real human being like an animal on safari and that’s not cool.

2. If you do take a pic, act like you’re just taking a selfie. Set up the angle so it’s not obvious. Because if the celeb is famous enough, their bodyguard will be all over you for trying to take photos. Here’s a “selfie” Amelia took in order to get a photo of Adrian Grenier from “Entourage” at a pizza place a few months ago: 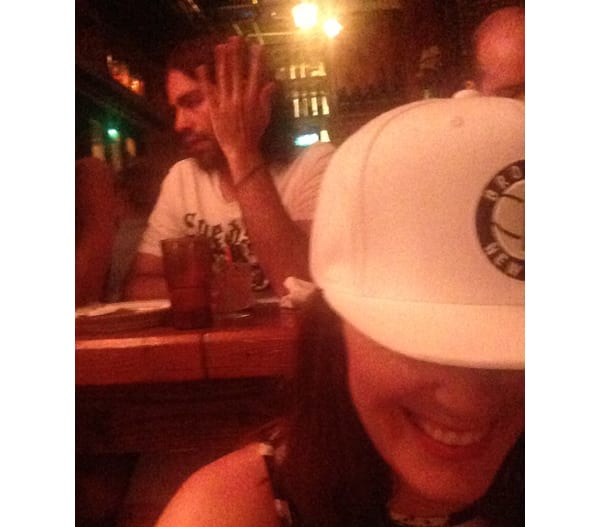 3. Don’t touch them.  I made this mistake myself when I saw Patricia Clarkson in a movie theater lobby. I had just watched her on “Seven Minutes In Heaven With Mike O’Brien” and thought she was funny.  So I walked up to her, touched her on the shoulder, and told her so.  She gave me a capital-L Look, like, Why are you touching me/talking to me? At first I thought she had been kind of rude — I meant to compliment her! — but it occurred to me that wouldn’t like it either if a total stranger touched me in public. I immediately felt like a shithead. (Sorry, Patricia!)

4. Keep your squeals, screams and moans to yourself.  “Sorry to bother you, but just wanted to let you know I’m a big fan of your work.”  That’s acceptable. Screaming and crying like a Girl Scout at a One Direction concert is NOT OKAY. Amelia managed to keep her cool the one time she saw Ryan Gosling walking out of a Whole Foods.  If she can do it, you can, too. [I was paralyzed by lust. — Amelia] (Though it should be noted that she screamed when Cee Lo was in our office last week.)

5. You can ask for a quick pic, but that’s it. No long book inscriptions for your grandmother or anything. If they say “no,” respect their wishes as you would any other person.

6. Above all, remember that celebrities are real people, too.  D-listers and assorted other famewhores get off on pretending like they can’t drink tap water — it must be bottled!  Those individuals will make everyone around let you know that they’re “special” at all times. But most well-known people — whether they’re Barack Obama, George Clooney, or just the CEO of your company — fundamentally want to be treated like human beings. So treat them that way.

7. Oh, and you’re definitely not allowed to cut off a lock of hair and run away screaming.

Best Baking Classes around the World

6 Tips for Improving Sales on Amazon