By now we’re all familiar with the infamous celebrity photo leak of 2014, aka “The Fappening,” as it’s been dubbed by the Internet. But what most people are less familiar with is the supposed “Ground Zero” site for the leak, AnonIB. And not only is AnonIB the Internet’s worst kept secret when it comes to vengeful nude picture leaks, but it appears to have a serious date rape problem as well. And no one is doing anything about it.

According to sites such as Gawker and Deadspin, AnonIB is most likely the site where August’s celebrity photo leak originated. Indeed, it has a subsection with the title “Obtained Images” or /stol/ which offer a treasure trove of stolen photos (known as “wins”) for trade and barter. The sheer amount of work that these guys put in is enough to make you want to quit the Internet forever.

And it gets worse.

Another subsection, Drunk/Passed Out or /dr/ is beyond horrifying. The section delivers exactly what you’d expect; photos of girls who are drunk and/or passed out. But these aren’t simply embarrassing photos of party girls à la “Girls Gone Wild.” No, these women are almost always completely unconscious and naked or semi-naked. Many are clearly being violated and degraded and quite a few appear to be underage. 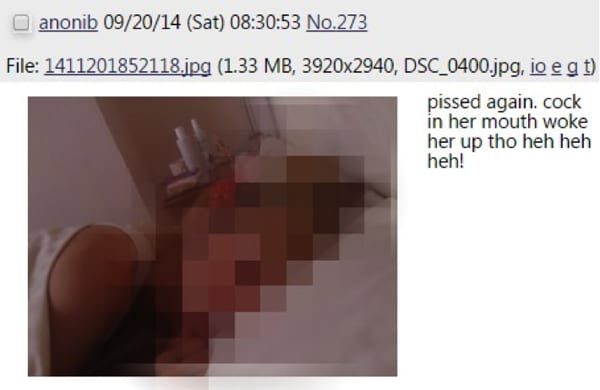 The mouth breathers who populate AnonIB seem to be untroubled by the thought of humiliating their victims. Most disturbingly, some claim to be friends, boyfriends or even the brothers of the women pictured.

Equally disturbing are the dozens of users egging these men on; asking questions and giving suggestions in almost every post.

Many go as far as digging up identifying details in a bid to track the victims down. 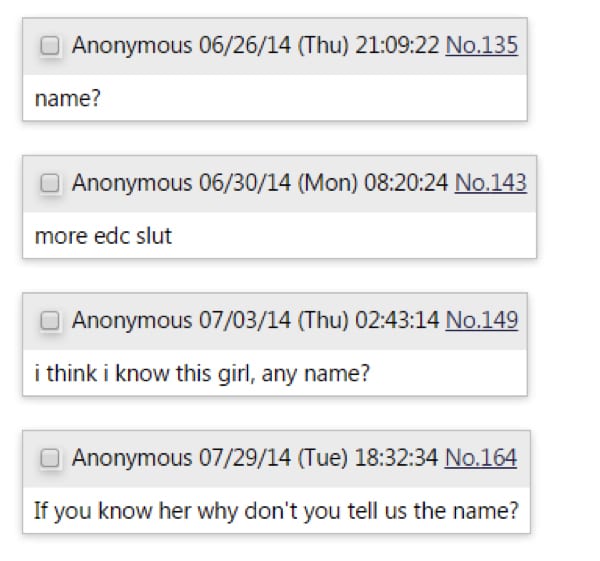 Most gut-wrenching are the posts that openly talk about drugging and raping the women pictured. 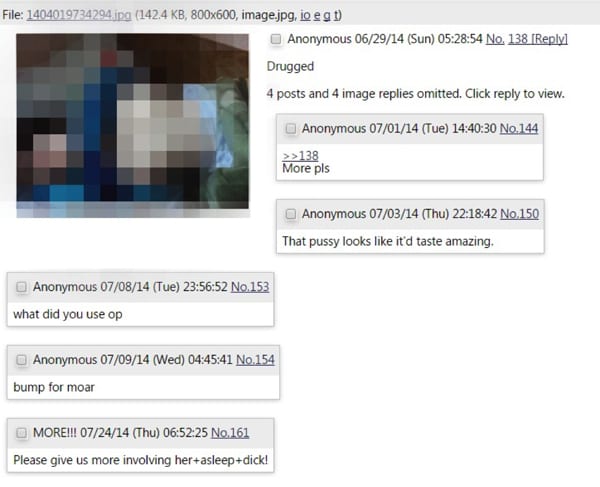 As you can see, with no hesitation, the other users beg for more photos and inquire about the drug the OP used to subdue his victim.

Another OP waxes poetic about the time he claims he sexually assaulted an underage friend while she was passed out at a party. I think it’s noteworthy that he, like most other AnonIB users, talks about his victim like she’s an object, not a person with feelings and a right to autonomy. It’s so detached sounding that I keep expecting them to refer to these women as “it” instead of “she” or “her.”

This guy seems just giddy about the prospect of sharing his “conquest.”

I did a little digging, and while AnonIB’s hosting is private, their registrar’s is Name.com and they have enlisted CloudFlare as protection against DDOS and hacking attacks. According to Name.com’s registration agreement:

“You represent and warrant that the statements in your application are true and that no Services are being procured for any unlawful or abusive purpose, including but not limited to the infringement of any intellectual property right or other right; the distribution of malware; the abusive operation of botnets; phishing, fraudulent or deceptive practices; the unauthorized transfer to yourself or any other party of any domain name or Services; counterfeiting; or any other activity in violation of any laws, rules, or regulations (the “Illegal Uses”).”

If users admitting to rape, drugging and procuring stolen photos (many of children and teens) isn’t illegal, then I don’t know what is. But apparently Name.com disagrees. Below is the response I received:

CloudFlare is a different story. They are known to take a hardline stance against illegal content and have zero tolerance policy when it comes to child pornography. From their TOS:

“CloudFlare’s policy is to investigate violations of these Terms of Service and terminate repeat infringers. You agree that CloudFlare may, under certain circumstances and without prior notice, immediately terminate your CloudFlare account, any associated email address, and access to CloudFlare.com and associated Services. Cause for such termination shall include, but not be limited to…(g) you have engaged or are reasonably suspected to be engaged in fraudulent or illegal activities;”

From their abuse section:

“We accept the following kinds of reports:

Thankfully CloudFlare seems to be taking this situation more seriously than Name.com. From their reponse:

“We have notified our customer of your report, forwarded your report on to the responsible hosting provider and to the National Center for Missing & Exploited Children (NCMEC). You may also direct your report to:

1. The provider where anon-ib.com is hosted (provided above);

2. The owner listed in the WHOIS record for anon-ib.com and/or;

Whether or not anything is done remains to be seen.

AnonIB is clearly breaking not only the law, but the various terms of services they agreed to with these companies as well. Yet, even after the Jennifer Lawrence photo fiasco, the site is still up and running. I think this says a lot about how society values women and their physical autonomy. But the real problem is not with CloudFlare or Name.com.

CloudFlare doesn’t have the ability to remove content, though they are well within their rights to terminate their agreement with the site, which would leave AnonIB’s anonymity in jeopardy. Name.com could seize the domain (which has happened to the site before), though AnonIB’s owner would simply lay low for a while and then re-register under another name. The key to taking out AnonIB once and for all lies with their hidden hosting company. But even that isn’t a sure thing.

The real horror here isn’t the fact that these sites exist. There will always be monsters in sheep’s clothing taking advantage of those who trust them, or predators willing to steal or deceive. No, the real horror is that there are seemingly innocuous, professional companies willing to give these predators and perverts a platform to showcase, trade and barter the evidence of their abuse. And until companies like CloudFlare, Name.com and AnonIB’s anonymous hosting provider take the problem seriously, these sites will continue to pop up and cause havoc for the women and men being victimized.

Kickass Woman Of The Day: 99-Year-Old Doreetha Daniels Just Got Her College Degree

Republican Gal Sad That No One Thinks She’s Cool