The Middle East is filled with amazing countries, many of which do not get enough attention. But they certainly deserved to be noticed because of their history, beauty and even their contribution to the world today. If you asked the average westerner about many of these countries, they will likely never have heard of them or not know much of anything about them even though they have played a vital role in the development of western civilization. They are beautiful places to visit and do business.

The west must both review its approach to these countries and modify their placement in history for the world to understand how vital they have been to all of us throughout history and, in many cases, how they remain even more necessary today.

One particular country that fits this description is Oman. Oman is a Middle Eastern country on the southeastern coast of the Arabian Peninsula in Western Asia. It is officially known as the Sultanate of Oman, and Islam is its official religion. The country has a population of only 4.5 million and more than 1 million foreigners living there. Oman is the 25th wealthiest country in the world, with a GDP of $167.8 billion. The country is peaceful with a stable government that is overseen by the Sultan, who is a monarch.

The country has tremendous natural resources, including oil, and boasts a burgeoning tourist industry. The state, at more than one million barrels per day, is the largest Middle East oil producer that is not a part of OPEC, but even without this designation, it has customers lining up to purchase its high-quality oil.

Muscat is the Oman capital. It is a port city which sits on the Gulf of Oman. Mountains and desert surround it, but it has considerable greenery inside of its borders. Muscat is famous for its modern, marble-clad Sultan Qaboos Grand Mosque. The mosque can be seen from miles away and sits like a shining beacon in the city. It is also famous for its antiquities and artwork, which you can see in the shopping malls. These high-quality art pieces typically have a wide variety of subjects including clifftop landmarks such as the 16th-century Portuguese forts, Al Jalali and Mirani, looming over Muscat Harbor. Oman is one of the most famous tourist attractions in Middle East Asia. Each city in Oman has some specialty that is enough to attract you to travel again, to learn, and keep it in your memory forever.

In this article, we are going to discuss 5 best places to visit in Oman that enable us to make you understand a lot more about Oman’s beauty. You will get a feel for the country and perhaps want to visit and learn more about this fantastic place. If this is the case, you can easily make travel arrangements to Oman through the travel website Almosafer.com. Let’s start with the most amazing cultural landmark in the country: 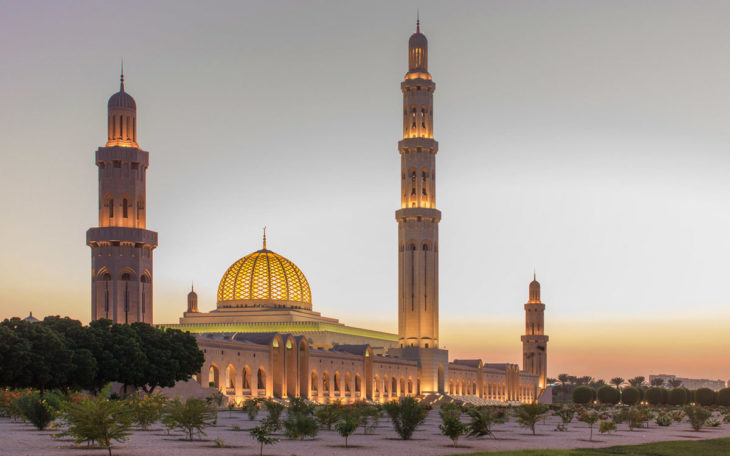 The Sultan Qaboos Grand Mosque is the primary and most important mosque in Oman. It is named after the most famous ruler in Oman’s history Sultan Qaboos bin Said. He ruled the country from 23 July 1970 until his death in January 2010 and was a fifteenth-generation descendant of the founder of the House of Al Said. He was the longest-serving leader in the Middle East and the Arab world at the time of his death and is a revered icon in the country today. His reign was marked with growth, modernization in the country, and his benevolence was widely respected throughout the Middle East during his long reign.

The Qaboos Grand Mosque is located in the capital city Muscat near the center. As the name implies, it is quite grand. The mosque has a 50m dome. Marble flooring and walls and is finely crafted. It is reported that the mosque took several years to build because of the attention to detail. The mosque can accommodate up to 20,000 people at one time and is in constant use by Muslims who come from all over the country to pray there. One fantastic feature of the mosque is its prodigious Persian carpet.

The classical Persian Tabriz, Kashan, and Isfahan design traditions are implemented in four years to design the mosque, which contains 1,700,000,000 knots, weighs 21 tonnes, and nearly 28 colors of shades are used. 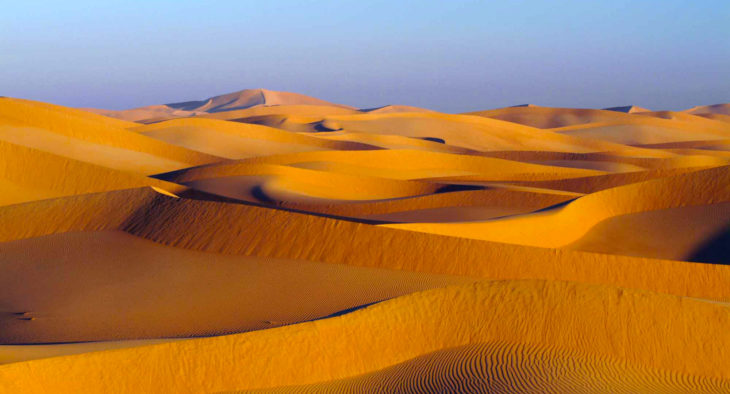 The Wahiba Sands is a region of desert in Oman which covers 180 kilometers north to south and 80 kilometers east to west, with an area of 12,500 square kilometers. It was named for the Bani Wahiba tribe that has lived in the country for thousands of years. It is an area of the country best known for camping in the beautiful dunes of Wahiba Sands and for its safaris. You can book a safari that is a full day trip. You will be taken by car into the sands of the Wahira Sands and experience the topography, wildlife, and lifestyle of the people who live there. 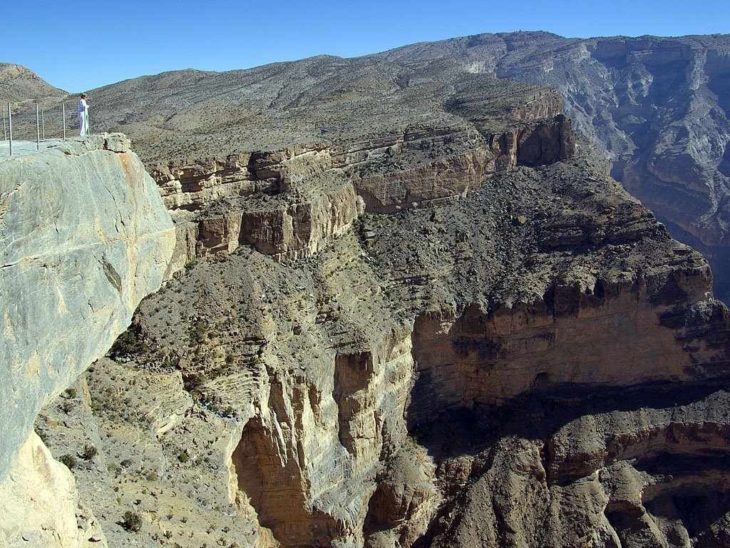 Jabel Shams is a popular sightseeing area located about 240 km from Muscat, the highest mountain area located in northeastern Oman north of Al Hamra town. The city is rocky with some vegetation and offers excellent opportunities for sightseeing and picture taking. 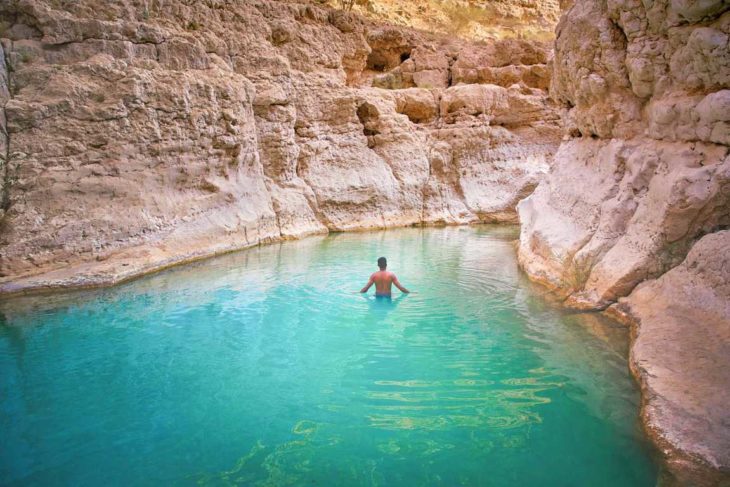 Wadi Ash Shab is located in the Gulf of Oman. It is a popular tourist and local attraction because of its river and lakes that offer excellent places to swim. On some days when it is very hot, you can see hundreds of people here cooling off in the water. There are also hiking trails that take you into and over the mountains.

Finally, there are places to relax and enjoy the fantastic views of the area. It is renowned as a place where people come to relieve stress. It would help if you carried the following things to enjoy at Wadi Ash Shab as – good hiking shoes, flip flops or water shoes, waterproof dry bag and phone case, goggles, and quick-dry towel. It is one of the most exotic places and pleasant to tour and stay for a while. 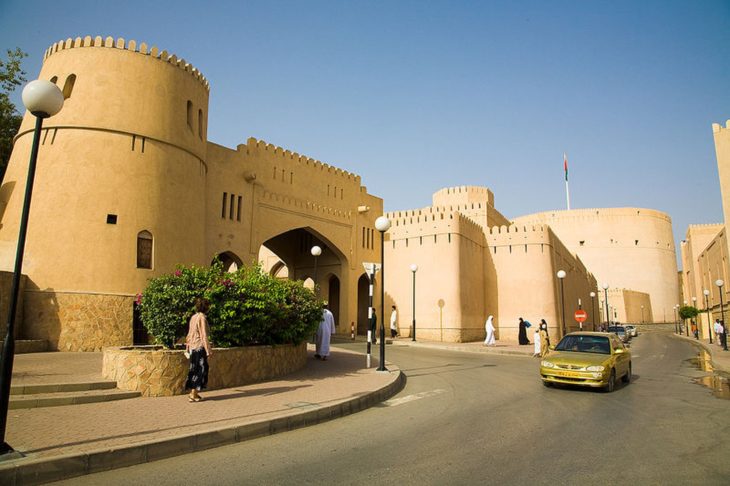 Nizwa Fort is Oman’s most visited national site. It is a castle situated in the Nizwa city of Oman. The fort was built in the 1850s by the second Ya’rubi, Imam Sultan Bin Saif Al Ya’rubi, on an existing structure that dates back another 500 years. The fort was the administrative seat of authority and served as a meeting place for the different Oman groups to discuss conflicts and agendas. Nizwa Fort took about 12 years to build and now sits above an underground stream. Its places in the history of Oman cannot be overstated because it represents the country’s ability to come together and repel raiding armies. Today it stands as a monument to the strength and resilience of the Omani people. You can tour the fort on most days.

6 Best Natural Vitamins For an Energy Boost in 2022