Cash & Coupling: Who Pays For What On Your First Vacation?

Whether you’re heading to Colorado or Cabo, thinking about your first vacation with your man likely has you more hot and bothered than the new season of “True Blood.” From the moment you compared calendars, visions of couple’s massages and romantic dinners have probably been all you can think about. But before you make a single reservation, take a step back to consider how you and your significant other – as a couple – are gonna pay for the trip. Discussing who’s paying for what may feel awkward, especially if this is the first time you’ve ever had to talk money as a twosome, but it can be great practice for your future together. With this advice from Nicholas Aretakis, author of Ditching Mr. Wrong, you can breeze through vacation planning and ensure there won’t be money trouble in paradise.

Plan on paying your own way. Even if this trip was your partner’s idea, never assume they’re going to foot the bill. “When someone invites you on a trip, you should ask how much it will cost you and determine whether it’s within your budget,” says Aretakis. “If the other person offers to pay, that’s a bonus – but realize that there may be certain expectations. Pay your own way, and you put yourself in a more comfortable position of equality and control.” If he’s offered to pay for the hotel but you aren’t comfortable sharing a room – like if you haven’t done the deed yet — don’t hesitate to make a separate booking. Just be sure you’re honest about your reservations – both at the hotel and the intimacy department. Or if you’re totally cool with sharing a room, but want to do your part, offer to cover his flight or some of the big meals out. 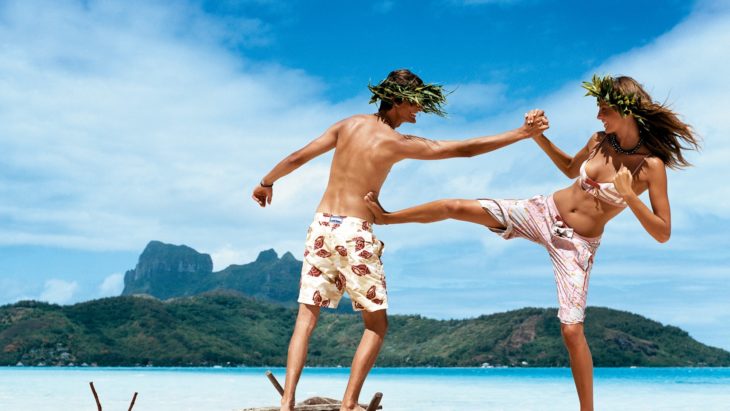 Develop a vacation budget. Consider this an opportunity to establish healthy money habits as a couple. Aretakis suggests a pre-trip meeting where you each come to the table with the specific monetary amount you’re willing to spend. “Get clear on the financial arrangements ahead of time so once you’re on vacation, you can have fun without worrying. Be sure to discuss plane tickets, hotels, meals, and activities.” He also recommends bringing extra for things you didn’t consider – like that couples massage you forgot to book.

Consider playing sugar mama. If you earn more than your guy and want to treat him to the trip, don’t let old-fashioned ideas prevent you from spoiling him. “When one partner has a much better job or is obviously more established financially, he or she should offer to foot more of the bill,” says Aretakis. If your guy brings home more than you, though, don’t assume he’s going to feel this generous – be grateful if he does, just make sure strings that make you uncomfortable aren’t attached.

Have an exit strategy. Aretakis urges you bring enough cash to take care of yourself if things turn sour. “Make sure you have some financial independence – enough money to call a cab or go to a different hotel while you wait for your flight,” he says. “If you’re not having fun, are uncomfortable, or feel you may be in some danger, you need to be able to afford getting home on your own.” Not to be a downer, but it is not unheard of for couples to break up while on vacation together, so be sure that you’re holding your own ticket, confirmation numbers, passport, and wallet.

Be flexible. You may always fly first class, but you might have to compromise your tastes to make the shared budget work. “It’s unfair to request the Four Seasons if you aren’t contributing your share,” says Aretakis. And if he’s particularly insistent on treating you to a nice restaurant on a night you don’t feel like dressing up, try to go with the flow – you never know what surprise he has planned.

Keep a record of the money you spend. It’s not particularly romantic, but if you and your S.O. have agreed to split the approximate cost of the trip, keep track of how much you’re each spending. When The Frisky’s Editor, Amelia, took a trip to Paris with her then-boyfriend, the two of them kept track of how much they each spent over the course of the trip; upon their arrival back home, they compared notes and when Amelia realized she spent less, she covered the cost of their utility bills that month as payback.

Money 101: 5 Tips For Traveling On The Cheap