I’ve never considered Boston a viable option as a place to live. It was a good place to go to college, an excellent way to hone my reflexes and acquaint myself with being an adult. It’s a city that feels like training wheels for whatever lies in the great beyond. It’s full of college students, which is amazing when you’re a student, like the entire city is your quad. When you are an adult — removed from the detritus of undergrad life, and living in the outskirts where the houses are bigger, the streets are silent and the grass is both abundant and greener — things are different.

Some friends and I decided to go back to Boston to visit our friend who has lived there since we graduated. Our original plan was to do a reunion tour, peeking our heads in some of the places we stumbled in and around when we were fake mini-adults. The friend I was visiting lives in Jamaica Plain, a quiet neighborhood that I had spent little to no time in when I was at school. This time around, I could see why. There were actual houses, big and stately, full of adult people with children and bumper-stickered Volvos parked in the driveways. The streets were clean and wide, and the sidewalks were empty. As we drove in late Friday night, we passed through Newton, a town that is seemingly comprised of giant houses that look like they might be haunted. Upon arrival, we were too tired to do anything other than collapse in a heap on various air mattresses, after consuming two bottles of wine and catching up. 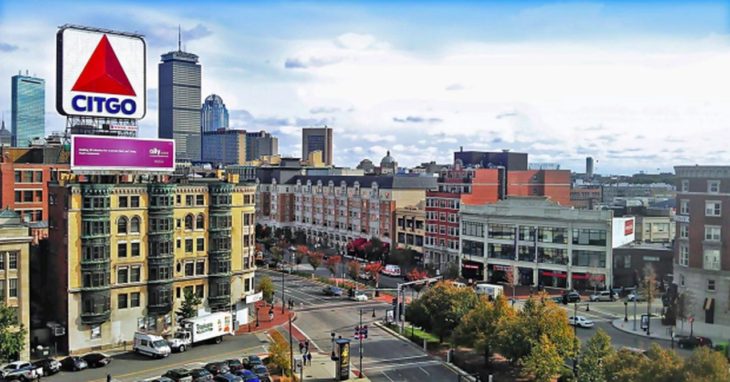 The next day, our reunion tour of Boston began. We started off in Kenmore Square, home of the Citgo sign and a bunch of other stuff that certainly wasn’t there when we were in college. We ate brunch at the Eastern Standard, which is a giant, dimly-lit hotel restaurant that seemed like the kind of place you’d take Mom for family weekend as a Boston University freshmen. The Bloody Marys were surprisingly good, and the food was serviceable. It did the job.

Our original intention was to set out on the Freedom Trail, something that I think we heard a lot about when we were in school, but generally avoided. It’s a 2.5 mile walk through the most tourist-clogged part of Downtown Boston, taking you past a variety of historical locations that are relevant to the founding of this great country. It starts in the middle of the Boston Common, in plain sight of the dorm I lived in my freshman year at Emerson. Once you find the beginning, you follow a red brick road that winds its way through the North End, past Faneuil Hall, through Haymarket and over the Charlestown Bridge up to the Bunker Hill Monument. It’s not a straight shot, but why would it be, you fool, people had horses back then. Horses can’t ride in a straight line! Here’s a map: 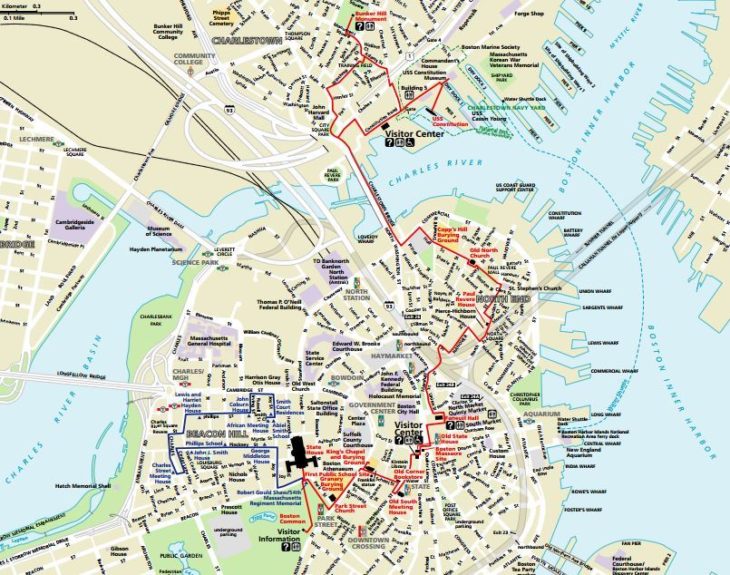 We passed Paul Revere’s house, which was closed. We walked past the site of the Boston Massacre, past a variety of churches, past Faneuil Hall and through the dregs of the Haymarket farmer’s market. We walked through the North End, contemplated getting a cannoli from Mike’s Pastry and forged on. If you’re in the North End, and are feeling peckish, stop there, deal with the line, and get a cannoli. There’s very little that Boston does well, in my opinion, but cannoli from Mike’s are one of them. 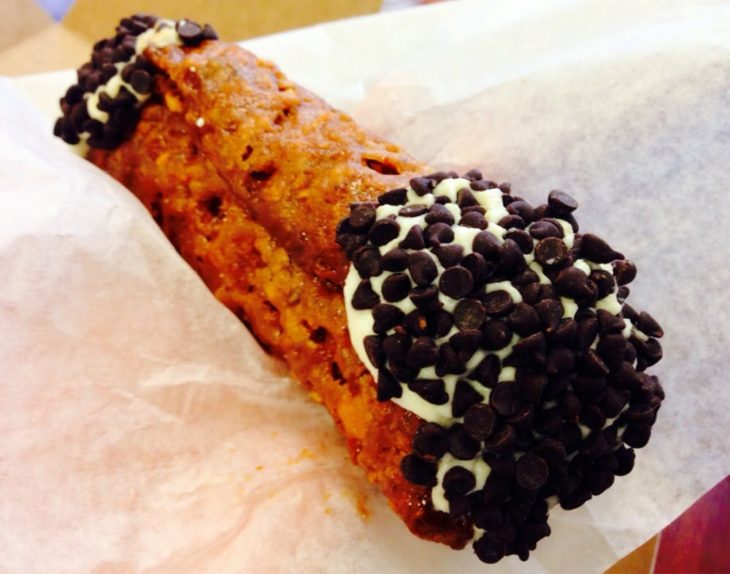 Eventually, if you follow this ridiculous path, you’ll cross a bridge into Charlestown, which is a neighborhood across the river that looks like Disneyland’s imagining of New England: all clapboard houses, with well-appointed kitchens you could see from windows with the blinds raised. It’s dead quiet, quieter than Jamaica Plain, quieter than Newton. It felt like we were trespassing somewhere we shouldn’t be. We sat on the hill in front of the giant obelisk, enjoyed a panoramic view of Boston, and then retreated to the warmth and comfort of the Warren Tavern, which had cheap beer, good wings and some of the best soft pretzels I’d ever had. 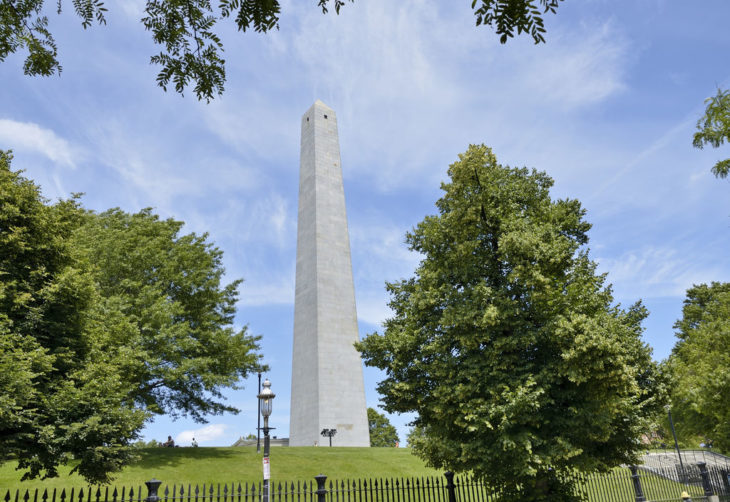 That night, we ate at the Galway House, a dive-y little place down the street from my friend’s house. This place was the best. They had a solid and affordable beer selection, hearty portions of bar food that tasted like whoever made it actually cared. The clam chowder was excellent, the service was lovely and the bar itself was decorated for every single holiday, from Christmas lights to St. Paddy’s shamrocks to Valentine’s Day hearts. It was a treat. 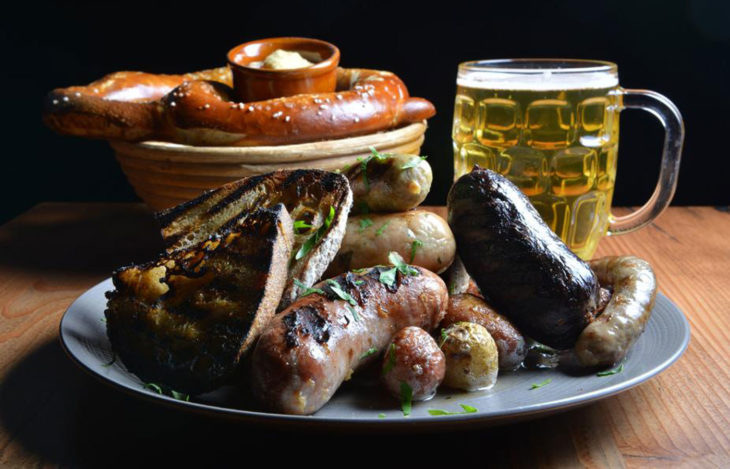 The next day, we finished our reunion tour by eating more, probably because it is all we do nowadays, at the delicious and adorable Bronwyn in Somerville’s Union Square. It was astonishingly quiet for a Sunday at 2 p.m., but that’s maybe because it’s new. The waiter wore a leather apron and was exceedingly friendly, and we all ate our food quietly, because it had been a very, very long day. I had a hearty pork hash and a grapefruit beer, and then fell asleep on the ride back to New York.

Does this city surprise? Yes and no. I remember Boston being more provincial, in a way that felt stifling. There was nothing going on! There was nothing to do! Maybe it’s because living in New York is such slog sometimes, but during this visit, I actually thought that Boston had some charm. It’s pretty, there are houses that are real and big and comfortable, and rent seems cheap. It surprised me that I didn’t feel like I had to get out immediately, but it’s not necessarily where I’d settle. But, for a weekend visit, to hang with old friends? Boston is perfect just the way it is.

How can newsletter help your business attract more customers