If you asked me what I thought about Ohio when I was a boy-band-loving, glitter-coated 13-year-old, I would have proclaimed my hatred for my hometown, gloating that I had bigger things in store.

Now, seven years after I left, I feel the need to apologize. I recently returned to the Midwest with my boyfriend, Mack, and I realized that Columbus is actually really cool. I lived in Ohio’s capital for 18 years without appreciating all that it has to offer…

When we made plans to visit, we decided to make the ten-hour drive from New York to Ohio. It was dark when we finally reached the last stretch of highway, but we were hungry and antsy so we headed for Easton Town Center to meet some friends for dinner. An indoor/outdoor mall, Easton is great when you’re craving that mall experience. It’s also home to one of Columbus’s eleven Jeni’s Ice Cream locations. If you’ve never heard of Jeni’s before, drop everything and run to your local high-end grocery store for a pint. Mack swore that he’d never had better ice cream, and we natives insist it can cure diseases. I decided on the brambleberry crisp while he opted for the hometown favorite, salty caramel. Offering very innovative flavors (wild lavender anyone?) and natural, chemical-free ingredients, it’s the perfect mixture of creamy, sweet and flavorful. 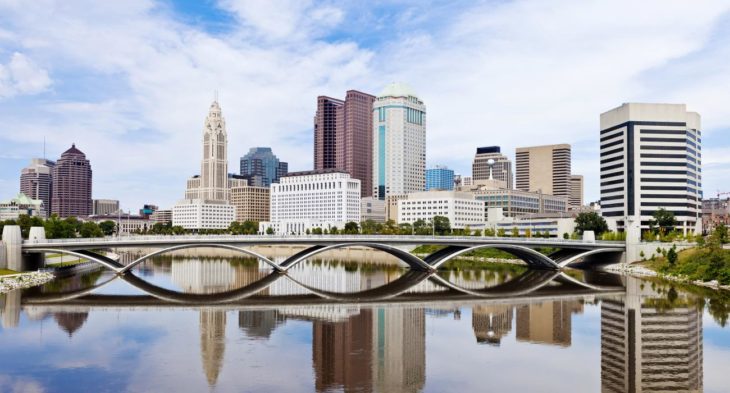 The next morning we convinced my not-so-food-adventurous friends to check out a new brunch spot. We picked Katalina’s for its lovely outdoor seating, surrounded by Victorian-style homes and quaint, tree-lined blocks. I opted for the famous Nutella-filled pancake balls paired with sweet-and-spicy bacon, and I’ll never be the same again. I repeat: PANCAKE BALLS with NUTELLA. Enough said. My friends got various egg sandwiches, and before we left they asked, “Is it acceptable to return for dinner in the same day?”

After brunch, we decided to walk around nearby German Village. If I find myself living in Columbus again, this is where I want to be. Like something out of a Hans Christian Andersen story, German Village is an historic neighborhood with huge red brick homes surrounded by wrought iron fences, set in front of immaculately maintained (and possibly enchanted) gardens. To top it off, most of the streets are lined with cobblestone. Being huge literature nerds, our first stop was Book Loft, a bookstore that prides itself on its “32 rooms of books.” After browsing for a while, we headed to Pistacia Vera for French macarons, and then to Schmidt’s Sausage Haus for authentic German cream puffs (because when you’re on vacation, calories don’t count). The cream puffs here are humongous. We didn’t eat dinner at Schmidt’s, but I’ve been to their all-you-can-eat sausage buffet many times and it’s as amazingly gluttonous as it sounds

Filled to the brim with sugar and teetering on the edge of diabetes, we decided to give food a break for a while and explore downtown. One of my favorite parts of returning home is the first glimpse at the skyline. Columbus’s unassuming skyline is nothing like New York City’s, but its modesty makes it all the more beautiful. Furthermore, the Scioto River runs through the city and offers many events throughout the year such as Jazz and Rib Fest in July and riverside Independence Day fireworks. Walking beside the river, the city looks just big enough to be striking, but intimate enough to feel homey. 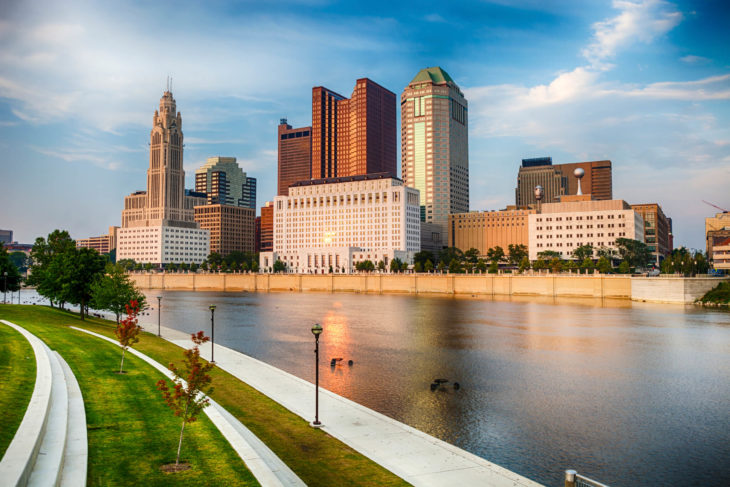 With just one more evening before we bid adieu to the heartland, we decided to explore the Columbus party scene. We ended up in the Short North, a strip of boutiques, coffee shops, restaurants and bars just past the Ohio State University. Catering to college students and the liberally-minded, it definitely felt like we were back in New York. Our visit coincided with Gay Pride Weekend, so the bars were overflowing with celebration and booming disco. One of the great things about Columbus that surprises outsiders is the extremely large gay population. During our quest for a bar we passed a scantily clad man kissing a police officer’s cheek, and I couldn’t help but feel giddy over how welcoming everything felt.

We picked a newer bar called The Pearl where the atmosphere was perfect and catered to my love of everything rustic. I settled on the Moscow Mule — just sweet enough, it packed a punch and didn’t skimp on the alcohol. Mack ordered an Audacious Apricot Beer that I swear to you changed my perspective on beer forever.

After drinks we decided to browse storefronts and late-night window shop. If you visit Columbus on the first Saturday of any month, definitely check out Gallery Hop, an event where the art galleries in the neighborhood open their doors until late and offer free bubbly and cookies. At one point in the evening Mack asked, “Are you sure we’re not still in Brooklyn?” The bars we passed were the perfect mix of cheap Ohio dive (where else can you find Blue Moon for $2.50?!) and upscale, speakeasy-style glam. 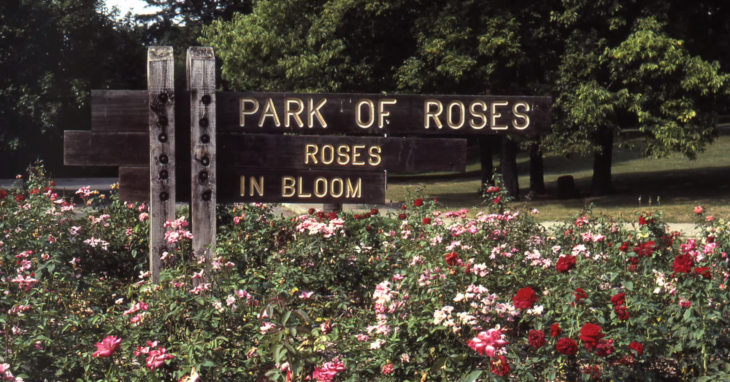 On our last morning we wanted to check out the Park of Roses. Exactly what it sounds like, the park is a spacious garden filled with tangled vines and (surprise!) thousands of roses. After a short stroll, we only had a few hours before we had to depart, but it was just enough time to check out another Ohio ice cream staple: Graeter’s. If Jeni’s is your sister with the sweet loft apartment, Graeter’s is your grandma’s apple pie. The peach ice cream I picked tasted like it was made that morning, and jam-packed with fruit pieces.

Before Mack and I left NYC, I was worried we wouldn’t have enough activities to fill out the weekend. Instead, we left with an entire list of spots to check out on the next time around. From a cocktail hour at the butterfly conservatory to one of the largest state fairs in the country, the city caters to myriad tastes and interests. So if you find yourself in the Midwest, give Columbus a chance. Homier than Chicago, friendlier than New York, I’m proud to say my hometown is a great place to spend a weekend.

10 Ways To Make Your House Guests Love You Forever

What you need to become an inventor