You can take the girl out of Michigan, but I’m not so sure you can ever take the Michigan out of the girl. I never thought this would be the case when I first left home, but the deeper I delve into building a life here on the East Coast, the harder I stubbornly cling to my Midwestern roots. Sometimes, when I’m in a mood, I simply can’t help telling anyone in New York who will listen how they will never get “real life” because they did not grow up in the land of values and grit and manners and factories and old-fashioned blue collar work ethic and those big, beautiful lakes (maybe at this point I should just turn on a Bruce Springsteen song and call it a day).

I realize I sound mildly delusional/totally judgmental when these words come out of my mouth. I happily left the Midwest by choice, after all, and New York has countless benefits I could never have found there. But there will never be anything that compares to the paradise of a summer afternoon in Michigan, with bare feet tucked into softly rolling grass hills, and big puffy clouds in the sky and a Vernors in hand; and I’ll never stop encouraging anyone who has the chance to pay a visit to the once-great (and soon to be great again) city of Detroit.

I remember the day the Hudson’s Building was demolished in 1998 like it was yesterday. We watched it on TV. Grandma cried. Once home to J.L. Hudson’s flagship store (and synonymous with Detroit’s great success in the ’40s and ’50s), the building sat empty and abandoned for years before coming to its dramatic end. What I didn’t understand then as a kid was that the building’s destruction was a sad marker of the greater hardships that were to come, culminating in Detroit filing for bankruptcy and struggling to even keep street lights on as its residents were left to cope with an exploding poverty rate. 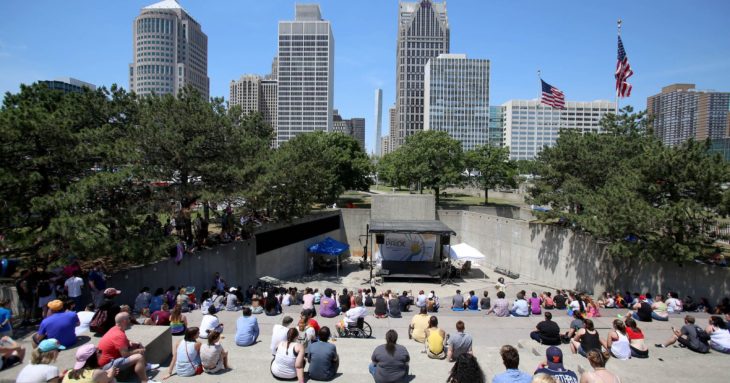 Detroit has seen better days, but the good news is that the city is ever so slowly finding ways to get back on its feet – or at least back onto a pinky toe. The auto industry keeps churning along, and while Detroit’s music scene is no longer the Motown paradise it once was, there are still great new artists to be found around every corner. Even the once-vibrant parts of the city that have transformed into abandoned buildings and empty lots are untapped wells of history. Detroit is full of whispers of days forgotten and lost tradition just waiting to be revisited. It’s no Disney World, but it’s full of adventure, if you’re willing to listen closely to its secrets and old stories. If you’d like spend a day or two exploring, here’s what I suggest!

When you arrive, be sure to pay a visit to the Motown Museum and step inside the former Hitsville, USA recording studio. If you’re able, catch a Red Wings or Tigers game (hockey and baseball respectively, for those of us who don’t follow sports teams). Even if you’re not usually one for sports, it’s hard not to have the time of your life at a Detroit home game. The beloved Joe Louis Arena, the Red Wings’ home for decades, is slated to be torn down in the near future as plans for a new arena are underway. Catch it while you still can!

Comerica Park, home to the Tigers baseball team, has an open design that makes glimpses of the game somewhat accessible even to those without tickets. It’s just down the way from cherished Detroit venues like the Fox Theatre, the Fillmore, and the Detroit Opera House (which you should totally check out). On a quiet day, the sounds of the game echo through the streets, and when a musician holds a concert at Comerica, the sound reaches so far that the whole neighborhood becomes a nosebleed seat! 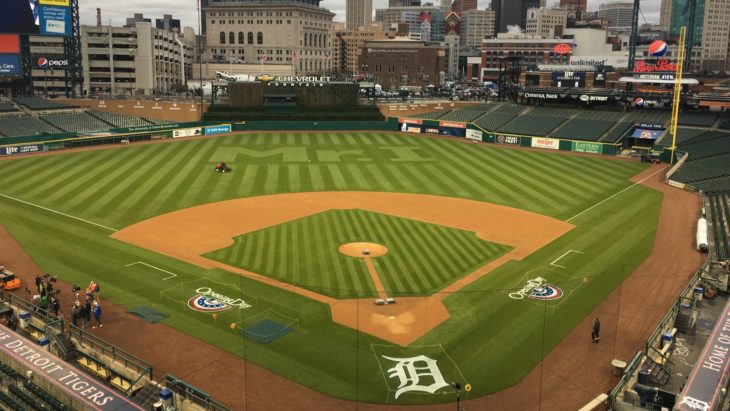 Before Comerica Park opened 19 years ago, the Tigers played at the creatively named Tiger Stadium for over 80 years, a venue that was more the stuff of mythic nostalgia than just a baseball field. Locals said goodbye to Tiger Stadium when it closed in 1999, not too long after the loss of the Hudson’s building. When the ballpark was finally demolished almost ten years later, something kind of magical happened: an open field remained on the lot where it once stood. Legally or not (I’m really not sure), those famous bases, once available only to the pro players during Major League games, were accessible to any passersby who wanted to finally play catch on the field they visited as a kid. The area was covered in weeds the last time I saw it (not that it made it any less of an adventure), but a group of local fans took it upon themselves since then to revitalize the space into a well-kept, fully functional baseball field. Last I heard, plans were being made to build condos on the property, but I’m pretty sure it still stands open — another gem to catch while you still can!

Before I go on about more places that require you make your own entertainment, there are, of course, attractions intentionally created for visitors to enjoy! Detroit’s Riverfront will take you along the Detroit River with a lovely view of the massive Ambassador Bridge and Windsor, Canada just across the water — the perfect place to watch a sunrise. Campus Martius Park is a skating rink during the holidays and a heavenly sand-filled pseudo-beach come summer. 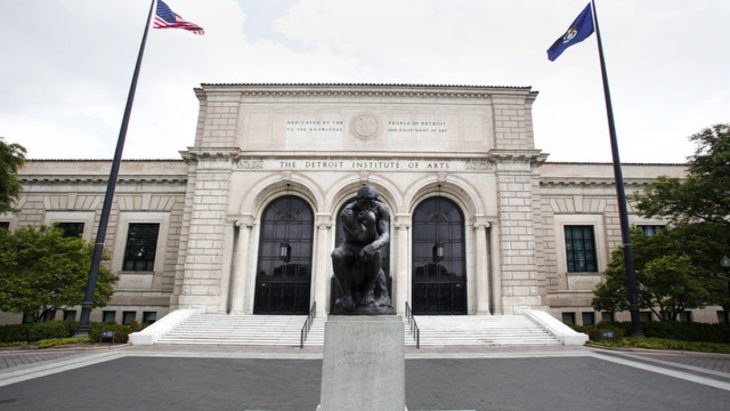 The Detroit Institute Of Arts is home to the work of legendary artists and especially loved for its breathtaking mural walls by Diego Rivera, which depicts Detroit’s assembly line workers. Nearby is the kickass Charles H. Wright Museum of African American History, which features a massive and moving interactive exhibit spanning hundreds of years of history. It’s also worth visiting the Detroit Historical Museum, which provides a walk through the re-imagined cobblestone streets of 19th- and early 20th-century Detroit. Art lovers can stop for a meal at the Cass Cafe, a gallery-turned-bar-turned-restaurant near Wayne State University. If you’re in town on a Monday, take a look at Slow Roll, the city’s weekly, all-inclusive group bike ride. Explore Eastern Market for delicious food and a peek at Detroit’s growing population of twenty- and thirty-something transplants. On a sunny day, head out to Belle Isle for a slice of nature (and an aquarium!) in the middle of the Detroit River. 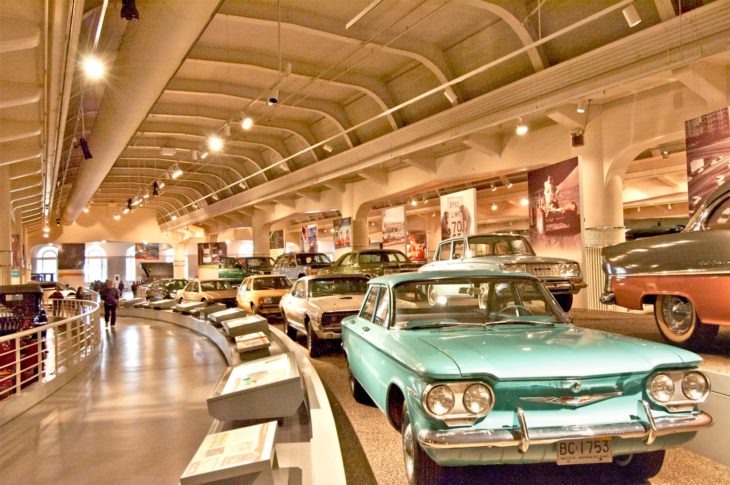 If you have the time and energy, take a detour to the nearby suburb of Dearborn for a stop at Shatila, a massive Middle Eastern bakery with desserts beyond your wildest imagination. If you’re in the mood for a semi-hokey but fascinating peek at history, take a look at the Henry Ford Museum.

When you’ve had your fill of museums, consider venturing out to see the former shell of Michigan Central Station. This train station hasn’t operated since 1988, but the building is gorgeous and eery and absolutely worth a visit. It’s a view you’ll never forget. After that, take a look at the Heidelberg Project on Detroit’s East Side, an outdoor art project meant to make something beautiful out of the city’s many old houses. Also make a point to check out the mildly terrifying fist monument in the center of the city (a tribute to Joe Louis, naturally) and the beautiful Spirit of Detroit. Then make a beeline for John King Books, home to approximately on million (!) books.

For great food, nom away at the Hudson Cafe, the Detroit Institute of Bagels, Red Smoke Barbecue, Slows Bar BQ, and Astoria Pastry Shop for dessert. If you’re in the mood for a real treat, visit Coach Insignia at the top of the Renaissance Center to see sprawling views of the city.

For great live music, spend some time at the Raven Lounge, the Old Miami (sometimes called the “CBGB of the Midwest!”), Baker’s Keyboard Lounge, the Shelter underneath St. Andrew’s Hall (which you surely remember from “8 Mile,” yes?), and the Stonehouse. The Majestic, formerly the beloved Magic Stick, isn’t the same gem it used to be, but it’s a great place to have a good time. Not every venue is in a particularly safe neighborhood (though many are), so watch yourself — but great music is just about guaranteed if you’re willing to venture out.
Above anything else, take a moment to take in the quiet streets. Being the Motor City, Detroit doesn’t have much in the way of public transportation besides its plucky (but lovely) little People Mover, so I’m going to assume you’ll bring your car with you if you visit. If that’s so, take an early evening drive just as it gets dark, and marvel at the phenomenon of mostly-deserted city streets, a product of the city’s mass exodus over the years. As steam flows up from the manholes and past your windshield and you feel like maybe you’re in “Taxi Driver” for a second, admire the strange juxtaposition between total stillness, and the thriving, compassionate city that lives just beneath all that quiet.
cities that surprisedetroitmidwesttravel