Is Hollywood enabling the sexual abuse of child stars? According to at least one former child star, the answer is yes. In a (paywalled) interview with the Sunday Times, Elijah Wood claims that organized child abuse is common practice in the film industry, and that it is covered up by powerful industry figures.

Best known for playing Frodo in Peter Jackson’s Lord of the Rings trilogy, Wood began his film career at the age of 8 with a minor role in Back to the Future II. He credits his mother with keeping him safe from any sort of abuse, stating that while he never went to the “parties” where such incidents occurred, “a lot of vipers in [the] industry” were abusing child stars regularly. He also points to Amy Berg’s documentary on child abuse in Hollywood, An Open Secret,which he describes as accurate but in a way that “only scratches the surface”. Wood goes on to compare America’s film industry to the abuses committed by late TV star Jimmy Savile in the UK.

“You all grew up with Savile — Jesus, it must have been devastating.”

For non-Brit readers: Savile was the first and last person to host the live music show Top of the Pops and fronted Jim’ll Fix It, a show where children wrote in asking him to fulfill requests such as arranging for them to meet their favorite celebrities. He became a family friend of Prime Minister Margaret Thatcher, received a knighthood, and worked with numerous charities… 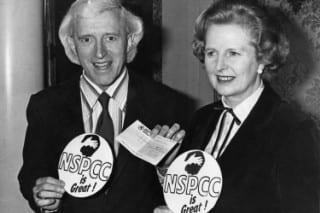 (The NSPCC is Britain’s National Society of Prevention of Cruelty to Children.)

…and, after his death in 2011, was the subject of at least 450 investigations based on testimonies from 300 people who claimed that he’d sexually abused them. The youngest victim was 5 at the time of the abuse. Adding more awfulness to the awful fire, he often made charity and publicity visits to hospitals, many of these victims were extremely physically vulnerable.

What makes it even worse — if it could be any worse — is that his actions were an open secret. Britain’s shock-value comedians were joking about him being a pedophile when he was still alive and could have been prosecuted, and hospital staff were reportedly aware of his reputation but let him visit anyway. Some victims made complaints near the time of the assaults, but no action was taken until after Savile died.

That’s why Wood’s claims at least merit serious investigation. Savile abused an unimaginable number of children and young people, people knew him as a child abuser, and he seems to have got away with it. Who’s to say the same thing can’t happen in Hollywood?

Besides, although there are no widely known cases of Hollywood figures abusing children to this degree, it’s easy to see how quick the industry is to defend the act, especially when the perpetrator is white and male (which most top Hollywood people are). In 2009, after Roman Polanski was convicted of drugging and sexually assaulting a 13-year-old girl in 1977, over 100 actors, producers, and filmmakers signed a petition for his release. In other words, even when victims are backed up by official verdicts, the industry’s priority is to protect its own.

There are organizations speaking out against this mentality. Bizparents, which supports child actors and their families, provides free information on its website about pedophiles and child sexual abuse. But for real change to happen, the industry needs to stop intimidating victims into silence. As Wood puts it, “That’s the tragedy of attempting to reveal what is happening to innocent people.” It needs to stop sheltering abusers and to exercise its duty of care over all actors, especially when they’re vulnerable children.