ESPN Will Have An All-Male Panel On Domestic Violence Tonight, Which I’m Sure Will Be Incredibly Thorough [UPDATED]

Tonight, the pre-show for Monday Night Football will feature a panel discussion about domestic violence. It will include, as Ben Collins points out at Esquire, the perspectives of 11 middle-aged-and-up men, and not a single woman. He goes on to dismantle Bill Simmons’ suspension from the network for calling Roger Goodell a liar and the network’s general posturing and censorship of dissenters and women.

What’s the point of this panel? It’s going to be a meaningless bummer. Hear me out: Everyone — everyone – knows that the only reason ESPN is bothering with it is to make it appear as if they’re “covering” the recent rash of domestic violence incidents and “addressing” their female audience, but it’s an empty gesture if their female audience isn’t even represented by a woman. What would happen if they didn’t bother and just had their normal pre-game show? It’s not like they’d get sued, and no one would say that they’re any more irresponsible than they’ve been demonstrating themselves to be with their crappy “coverage” of the issue anyway. I mean, hell, at this point, the better damage control would seem to be to just not address the issue at all and just let the rest of the world criticize them for that instead of making repeated and tremendous missteps like having Stephen Smith air his victim-blaming opinions about Janay Rice, suspending Bill Simmons for making an attempt at actual sports journalism, and now hosting an all-male panel on an issue that mainly affects women. 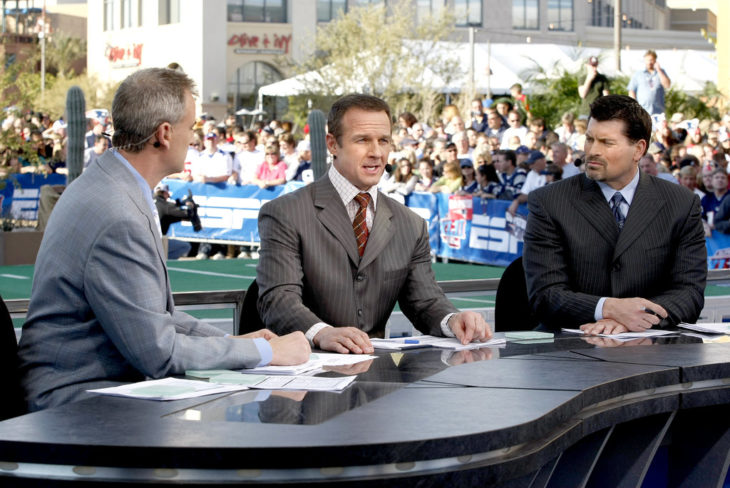 Let’s be honest: ESPN’s diehard fans would rather not watch this panel. They will, and they’ll use it to make themselves feel better about the fact that they aren’t boycotting the NFL or even doing something as simple as writing them an e-mail expressing their concern about the mishandling of the investigations and/or having real, serious discussions in their day-to-day lives about domestic violence. But those fans would much rather just listen to the hosts talk stats and injuries and speculate about who’s going to win. The majority only barely care that this is happening, and if they do care, they’re probably getting their news about it from sources other than ESPN.

So why is ESPN bothering? Buh, I don’t know. I studied the music industry once upon a time, not the television industry, not sports entertainment. My wager is that the production team thinks that public opinion would be worse If they did a hot pile of Nothing to address domestic violence, or the network is so unaware of how complicated the issue is that they genuinely believe that their actions will come off well to the people who are going to be the most critical of them. In the process, they’re exposing themselves and their anchors to much more serious, analytical criticism than they would otherwise.

But OK, whatever, ESPN, let’s hear the defensive, uncritical, #notallmen sorts of opinions we already know the panelists are going to regurgitate because that’s what you’ve been having them regurgitate for the last several weeks. I’m sure it’ll be, um, informative.

UPDATE: A PR rep for ESPN, Tara Chozet, sent me this tweet:

@RebeccaVBrink Hi Rebecca, the report about the ESPN DV panel was false. There was never one planned. Details: http://t.co/UI8qJSOMuK

The link leads to a statement from ESPN:

Contrary to published reports in Esquire, there was no panel on domestic violence ever planned for tonight’s Monday Night Countdown.  We will present our normal Monday Night Football pre-game show, with Suzy Kolber hosting and Lisa Salters reporting.  ESPN is proud of the work it has done covering the issue of domestic violence, and is committed to continued coverage.  Much of that work has been informed by several talented female colleagues from our television and espnW platforms,  including Hannah Storm, Jemele Hill, Jane McManus, Kate Fagan, Sarah Spain and more.

Ben Collins, the author of the Esquire article, is unclear on his Twitter account about why exactly it is that he explicitly stated that there would be a panel on domestic violence during Monday Night Football tonight when there wouldn’t be. Apparently the article picked up steam after Lindsey Adler at VICE tweeted about it, so Collins then posted a clarification stating that there wasn’t, in fact, going to be a domestic violence panel. Color me confused. The rest of us, meanwhile, embarrassingly picked up on the furor over the nonexistent panel. He does go on to say the following:

The point of the story: A requisite tragedy in a single group should not need to occur in order for women/minorities to be represented on TV

Um… OK. I don’t know what that means, and I don’t know if Twitter is the right place to be having the conversation. I do appreciate his analysis of Bill Simmons’ suspension as compared to Stephen A. Smith’s suspension and what it says about ESPN’s relationship with the NFL, but he remains murky on the clickbait-y apparent outright lie that he told in order to frame that discussion. ESPN’s Jane McManus had this to say:

Collins pointed out the following:

Well, a past panel does not a future panel make; apparently ESPN is trying to be more inclusive of women in their journalism; still, though, they aren’t really asking for women’s opinions on domestic violence if they’re hosting seven-man, zero-woman panels on it; their relationship with the NFL still kind of precludes honest journalism; the Simmons-vs-Smith thing is still fucked up and does demonstrate their priorities; maybe I was right about it being a pointless idea to host a panel discussion on domestic abuse on Monday Night Football?; I’m going to start giving female sports journalists like Lindsey Adler more patronage because that seems to be the solution to the problem, here.