Forever 21, you just keep getting better and better. In between lowering your prices to make them more “guilt-free” (with little thought, of course, to the workers who actually make the products), and getting in trouble for sweatshop-like labor conditions, you’ve now gone and fucked over the people who work in your stores. Earlier this week, Forevs sent out a memo noting that any and all “non-management” full-time employees would be reclassified as part-time, effective almost immediately.

“Forever 21,” reads the memo from human resources associate director Carla Macias, “recently audited its staffing levels, staffing needs and payroll in conjunction with reviewing its overall operating budget. As a result, we are reducing a number of full-time non-management positions.” All employees who received the memo will be reduced to a schedule to not exceed 29.5 hours per week. Why is that the magic number? Because under President Obama’s Affordable Care Act, mid- and large-sized employers are required to pay for health insurance for employees who work 30 hours or more. Forever 21 thinks it can get around this simply by reducing its technically-full time staff to part-time positions.

According to the F21 memo, health care benefits for employees moved from full- to part-time work will end on August 31 — less than two weeks from now. And in addition to losing all health benefits, these employees will also lose the ability to earn paid time off. It’s unclear just how many of Forever 21’s more than 27,000 employees this will impact, but it’s pretty clear that consumers are not thrilled. Several have already posted messages on the company’s Facebook page letting them know they’ll be boycotting the store. As many pointed out, the company’s move to deny workers benefits seems out of line with its overtly Christian messaging (their bags are labeled with the bible verse John 3:16). 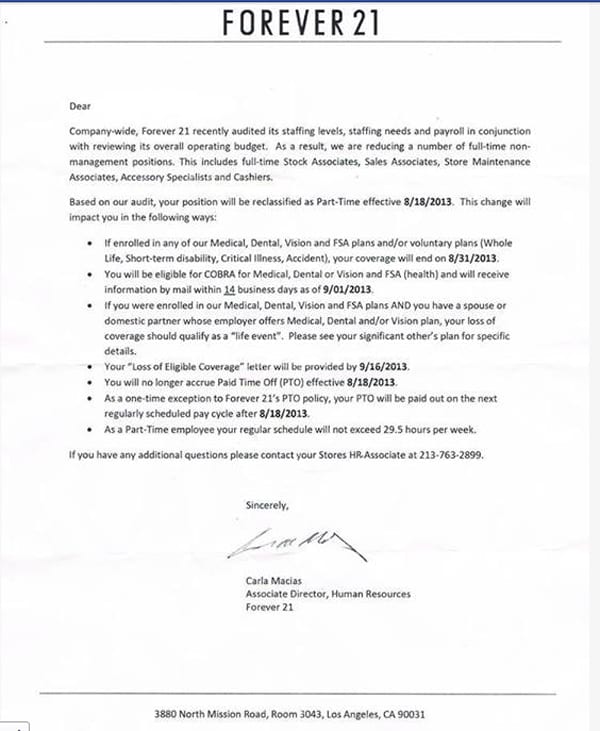 “Stripping away your employees’ health care: why that sounds EXACTLY like something CHRIST might do!” wrote one commenter.

Of course, Forever 21 is hardly the only company to try and downsize its full-time staff in order to avoid paying benefits. Walmart has also made moves to reduce full-time staff to part-time, and has also hired a more temporary workforce.  CKE restaurants, which owns Hardees and Carl’s Jr., began replacing full-time employees with part-time workers last year. And so did Darden Restaurants, which owns Olive Garden and Red Lobster chains.

So does Forever 21 refer to the maximum number of hours the company now wants its employees to work each week? And how is that at all economically feasible — for a single person, let alone someone supporting a family? It’s especially questionable considering that the company netted $124 million in profits in 2011 (the last year information is available). It’s not like they don’t have the resources to pay benefits. They’d just prefer the higher profit margins.

Calls to Forever 21’s corporate headquarters have not been returned.