Not only does the prominent actress love tattoos, but she also gets to play an iconic role that is engraved with it. Detective Comic’s Harley Quinn is one of the most prominent characters in the universe, but also one that is a source of inspiration for millions of women. Even though Suicide Squad was a failure, the audience still got to the chance to witness what Margot Robbie is all about.

The actress is by no means a small-time fish; quite the contrary Margot is one of the most highly sought-after actresses in all of Hollywood.

The Aussie born bombshell has managed to break millions of hearts with her stunning look and pretty face. But apart for it, she’s actually a damn good actress. And her role of Harley Quinn certainly says so. Being the only bright spot in Suicide Squad managed to land the actress a separate movie; Birds of Prey. And what that means is that we get to see her in action one more time; her and her tattoos.

Speaking on the subject of tattoos, the Harley Quinn character has them in abundance. They were one of the most instantly recognizable features of the character once the movie hit the screens.

But did you also knew that Margot tattooed her co-stars after the movie? She was so caught up in the trend that she gave everyone matching “SKWAD” tattoos. The tattoos were meant to commemorate everyone on finishing the movie, even if it was a complete failure. 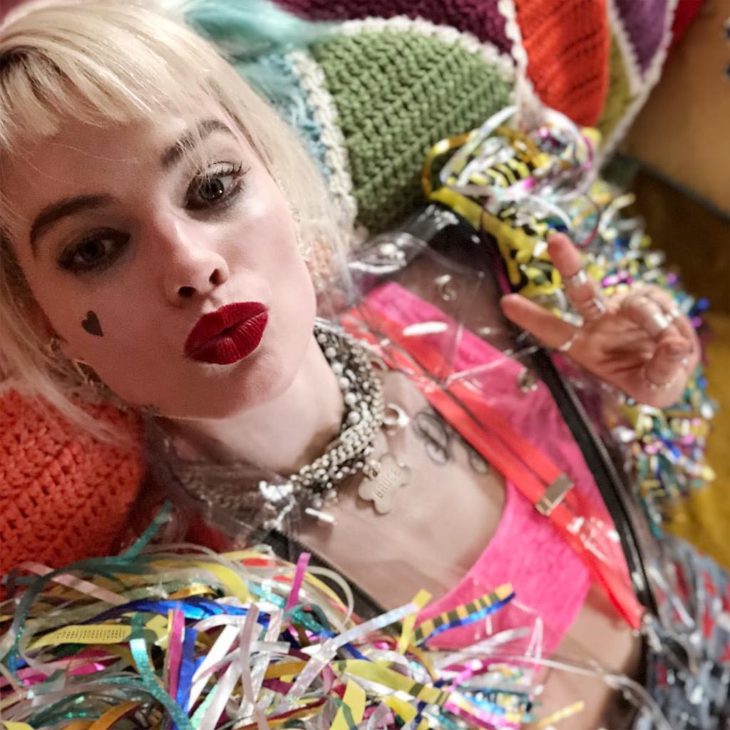 But the character of Harley Quinn has a set of tattoos that perfectly fit it. As you know, Harley is quite playful but also quite dangerous. She is very loyal, but can also punish.

She also helped the Joker escape Arkham, and both of them were destined to rule the world.

Their love was so strong that nothing could divide them. During the first time, Quinn was in prison, she decided to tattoo her “Puddin”. Puddin is the cute nickname she has for the Joker, and there are several tattoos that point that out. For instance, one is the “I Heart Puddin” with the Joker’s face and a heart next to it.

But these aren’t the only ones. And we’re going to tell you all about the rest of them, along with some backstory for each and every one of them. 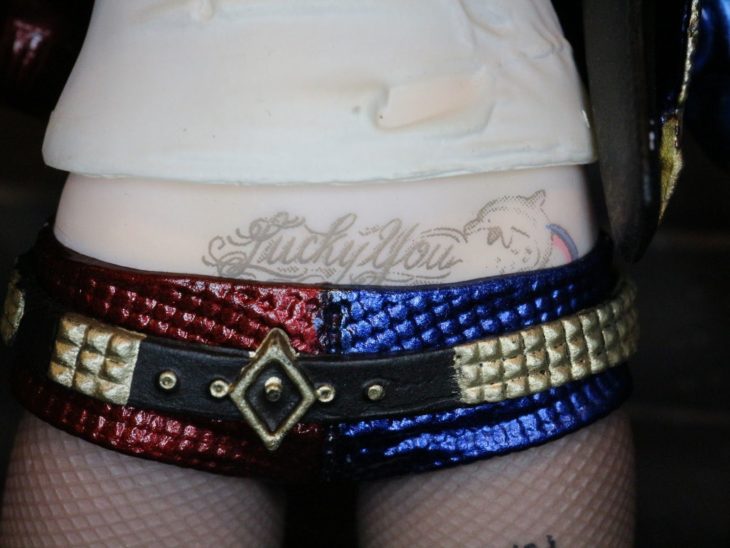 “Lucky You” is a pretty iconic one when it comes to the character. The lore suggests that the tattoo was done before Harley got arrested and put in the jail cell of Suicide Squad.

It’s located right above the waist and it’s a reference to how much she has changed since falling in love with the Joker. Next to it is a tattoo of a dolphin, which perhaps is a reference to her older self when she was Dr. Harleen Quinzel. 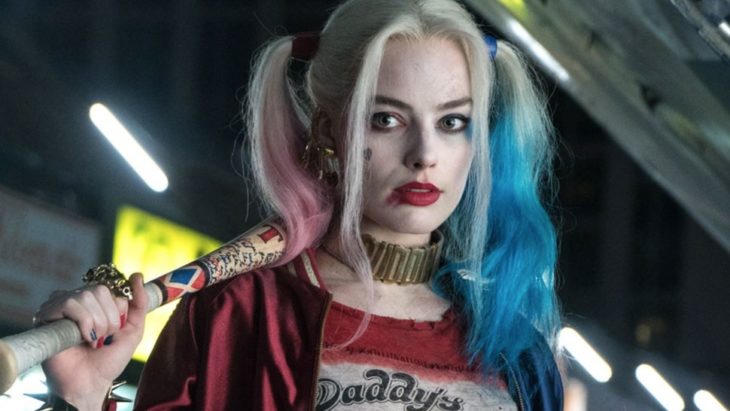 This piece of ink is located on Harley’s right arm, and it is a pattern that directly correlates to her costume in the cartoons. The cartoon costume also enjoys a quick peek after Harley goes through her stuff at the beginning of the movie.

According to Best in AU, this ink I supposedly done before her iconic leg tattoos. 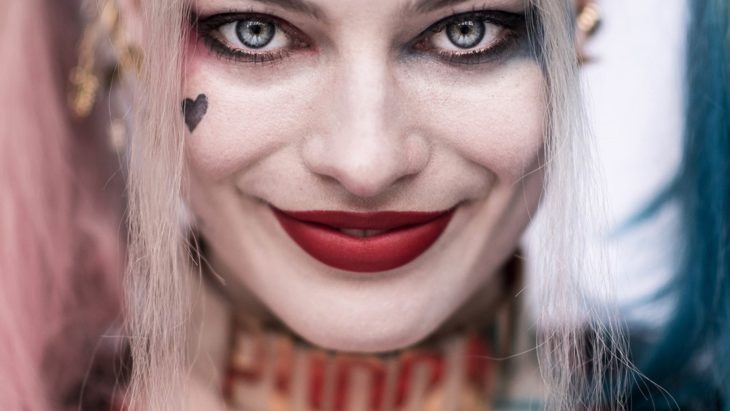 This ink is yet another one done in prison. You might notice this one as it stairs directly in your face at the beginning of the movie. “Rotten” is tattooed on her face, her right jaw to be precise. It’s done by herself, and it doesn’t replicate who she originally is.

Some say that this ink is completely related to how “rotten” she has become once falling in love with the Joker. Being a psychopathic killer that is only motivated by love for Puddin sure is something to be “proud” of. 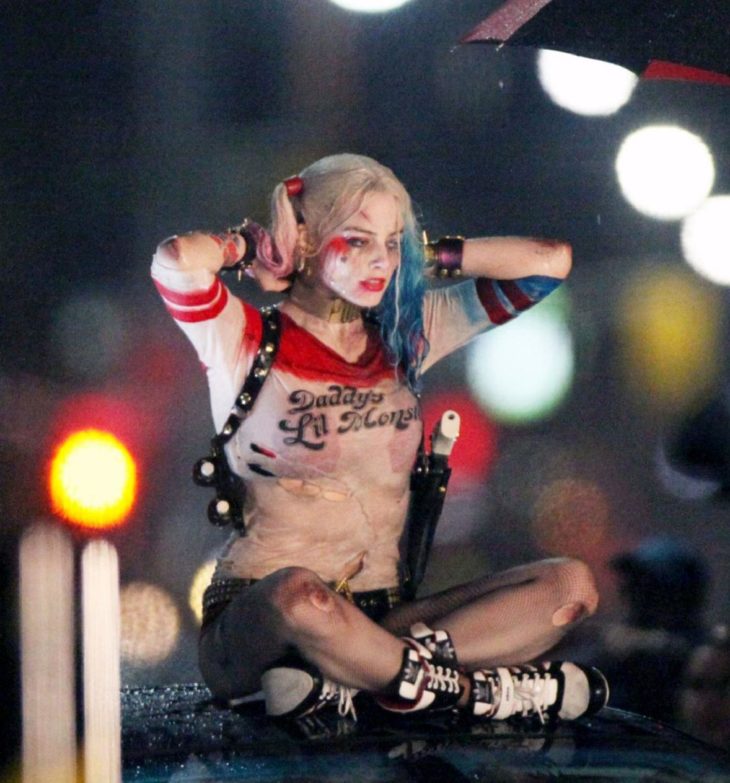 “Daddy’s Lil Monster” is yet another iconic piece of ink that we see it before her arrest, in the nightclub scene.

This particular piece of tattoo is located on her left side of the collar bone, and it completely resonates with her character. The phrase refers that she is a bad and dangerous person, but also playful and darling.

Some even say that this is the tattoo that makes Joker the owner of Harley. She is completely under his manipulative spell, thoroughly loyal, and only his. 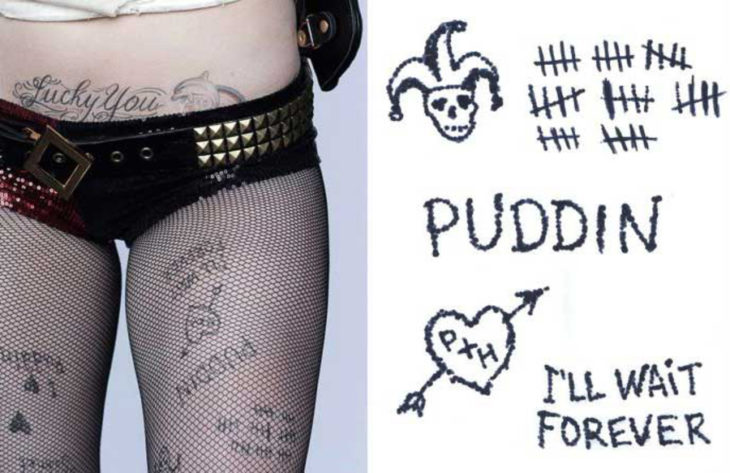 We talked about the meaning of Puddin and what it means for Harley. We also mentioned that there is by no means only one “Puddin” ink on Harley’s body.

Her legs, for example, are full of them, and one of the most easily recognized ones is the “Harley + Puddin”.

This ink is pretty straightforward and it resonates with their love. It’s like carving their names in wood, but the wood this time is Quinn’s skin. It’s said that this is yet one of her prison ink jobs since we don’t actually see any tattoos on her legs in the movie prior to her going to prison.

By not you probably get the idea that the source of her inspiration is the Joker himself.

“I’ll Wait Forever” is an ink that she also did in prison, due to the sheer sadness of having to be separated from her lover. We clearly see examples of her waiting for him throughout the movie, and the last scene when they finally reunite.

They both know that their love has no boundaries, so much that their brief separation deserves a permanent sealing on Quinn’s body.

Harley isn’t the only character that has tattoos in Suicide Squad. Margot has done a pretty good job of playing the character to its full potential, and her signature role has sparked more Halloween costumes than you can imagine. Her ink has also sparked a cult of following, and her “bad” personality seems to resonate with more people.

What to Wear to a Masquerade Party