“Hellcats” Cram Session: What Do Cheerleaders Do After Graduating?

Bust out your pom-poms, ‘cause tonight is “Hellcats” night! Since The Frisky’s own Kate Torgovnick happens to be an expert on college cheerleading—after all, the show is based on her book, CHEER!: Inside the Secret World of College Cheerleaders—every Wednesday we have her sound off on how the show stacks up to reality.

While she joined the cheerleading squad to get a scholarship, Marti has always made it clear what her priority is—going to law school and becoming a lawyer somewhere outside of the state of Tennessee. Which brings us to the question: what do cheerleaders tend to do after graduating from college? First off, graduating from college is scary for pretty much anyone. But for cheerleaders it’s a double whammy—not only do they have to face the “real world,” but they also have to give up the sport they love and that they’ve worked so hard to master. But cheerleading is not a sport governed by the NCAA and there are no 4-year eligibility rules. So top cheerleaders often change majors, transfer schools, pick up double majors, enroll in grad school or do anything it takes to postpone saying goodbye to campus life. It’s not unusual for high-ranking cheerleaders to stay in college for five, six, or seven years. Heck, in my book CHEER!, there’s even one guy in his eighth year as a college cheerleader.

As for career prospects after graduating, many college cheerleaders get into coaching, be it at schools or at a local cheerleading gym. Several of the cheerleaders in my book said that their goal was to open up a cheer gym of their own someday. If just a few of them do it, they could bring hundreds of new cheerleaders into the fold. This is one reason I think cheerleading is growing exponentially while other sports have stagnated in terms of numbers. 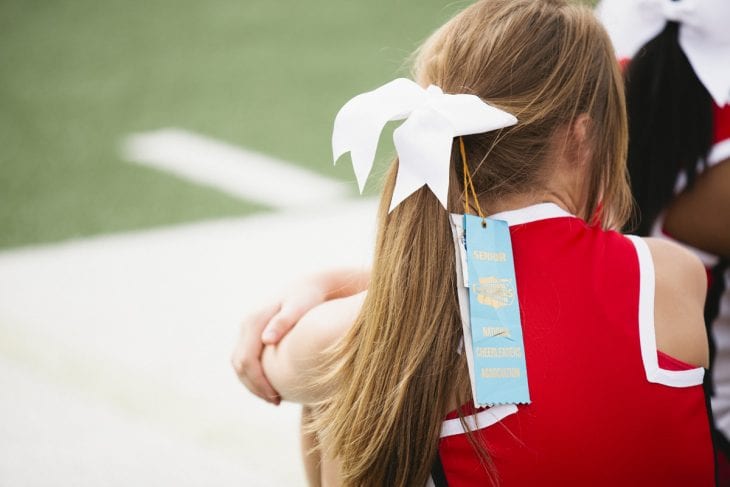 Cheerleaders graduate from school and go on to be teachers, accountants, filmmakers, you name it. But there are a few trends I’ve noticed. First, kinestheology is a very popular major among cheerleaders, as is hospitality. So many graduate and become sports trainers or physical therapists—good use of the injury knowledge they’ve built up through the years—or the managers of restaurants and hotels—good use of their people skills. Another popular track: becoming a pharmaceutical rep, a profession where looks and personality are in demand. No, I’m not making this up—the NY Times has even reported on the large number of cheerleaders going into prescription sales. Interesting, no?