In case there was any doubt about it, I’m a big-time feminist. I will rant and rave for hours about feminist theory, problematic “feminist” celebs (looking at you, Meghan Trainor), and how the patriarchy has wronged every single one of us. One actually kind of controversial view that I hold (and will defend until the end) is that one of the most important things we can do to uplift women is celebrate female sexual pleasure with the goal of ending the stigma and misinformation that surrounds female sexuality.

There has been much debate in feminist theory over the years about the role that female sexuality should play in the discussion—of course, women are trying to shake the idea that we are objects of pleasure, focusing on our sexual lives could serve to further reinforce that perception… But I think that’s BS.

In my view, only good can come from reclaiming and reframing female sexuality as something within our control. Allowing women to not just talk about, but celebrate, their own sexuality in the public sphere gives us the chance to change the narrative about the function of sex in our lives—because as much as Americans don’t like to acknowledge it, sex is a part of our lives.

It’s for this reason that I love songs by female artists that unapologetically celebrate getting it in. They give women who would be otherwise uncomfortable talking about their bodies an outlet in which to discuss their desires.

I also just like screaming along to these songs about getting in on while I’m driving. Here are some favorites:

“Side to Side,” Ariana Grande ft. Nicki Minaj

Okay, so maybe at first we didn’t quite realize that Ariana’s ode to getting “railed” was, in fact, about getting railed, but once we did we couldn’t stop listening. This song is raunchy AF and a perfect jam to prep you for a night out on the town.

“Genie in a Bottle,” Christina Aguilera 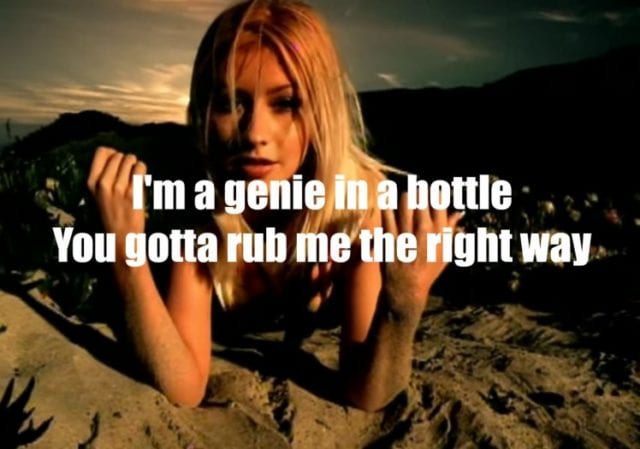 I’m including this because I think it subconsciously started my passion for dirty songs by women. I listened to this song every day as a tiny child. I thought it was literally about genies at the time. Then, I listened to it again at age 18-ish and I realized how wrong I was and how much more I love it now.

Everything Rihanna Has Ever Released

I think we all know that RiRi is the queen of raunchy tracks. Here are just a few options for a “Dirty Songs” playlist:

“Shut Up and Drive“ 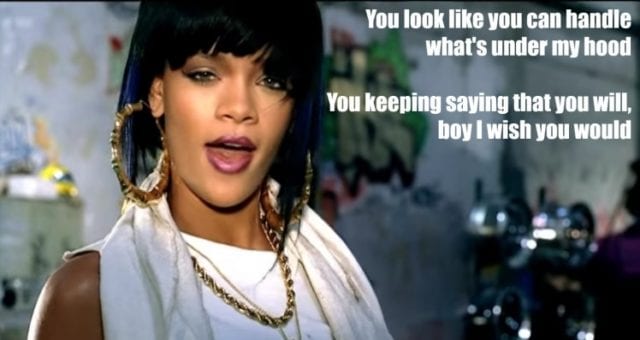 Additionally, “S&M,” “Skin,” “Watch and Learn,” “You Da One,” “Rude Boy,” and on and on and on. All hail Rihanna, Queen of sexually liberating music.

“Hands to Myself,” Selena Gomez

This song isn’t quite as explicit as some of the others, but it’s undeniably sexy. The beat, Selena’s breathy voice, the video—it’s steamy. Not to mention, the idea that a woman is just out here saying like “yes, I want to bone and I’m not going to apologize for it” (“I mean, I could, but why would I want to?”) is great. I love it.

I wasn’t even sure if I should embed this song here—it’s that explicit (so consider this your very, very NSFW warning). Sure, Azealia Banks is super, super, super off the rails right now, but hey—this song is good. It’s angry in a very traditionally masculine way and uses frank language to discuss (and celebrate) sex from a female perspective. It’s unexpected and it’s catchy AF. While I think sexual aggression is not a great thing on the whole, it’s refreshing to see a woman in the drivers seat for once.
“Je T’Aime… Moi Non Plus,” Serge Gainsbourg and Jane Birkin

Technically this is by a man and a woman, but goddamn it’s hot, hot, hot. Subtle whispers in French and (what was rumored to be, but never confirmed as) a real, live female orgasm (cue shock and awe) in the recording. Sure, there’s a man involved, but here’s the thing: this song was recorded in 1969 and depicted a female orgasm. That’s a big deal. Mainstream movies nowadays usually can’t do that without earning them R-ratings. Sure, it got the track banned from many radio stations back in the day, but they stuck by it. That’s amazing.

Another artist who is a certified pro at sexy lady jams is obviously Queen Bey. I’m not going to lie to you, she makes up at least a third of my “Dirty Songs by Dirty B*tches” playlist (which is an actual, literal playlist that I have). Over the years, she’s changed her approach to sexy songs a number of times, but each Beyoncé era has had it’s fair share of get down songs… Though her surprise album Beyoncé definitely had the most:

All of them are fantastic, but my all-time favorite is actually Beyoncé’s oldie-but-goodie, “Ego.” This song is my everything. It’s impossible to not feel like a bad b*tch after listening to it.

Now, please go make a playlist, blast it in the car, and scream along while giving zero f*cks who hears. It’s a really fun way to start smashing the patriarchy and celebrating your sexy-ass self in the process.