How Do You Make Koa Wood Rings?

Koa wood is always taken from a huge tree, which gives it a profound richness of hues and a variety of grain patterns. It has been used in Hawaii for many generations since it is a fast-growing tree that allows for natural replenishment. It is the second most prevalent tree on Hawaii Island and is native to that island. Koa is a Hawaiian word that signifies warrior, brave, and fearless. Products can be made from any portion of the wood.

Koa’s varying grain, curled figure, and color make it a joy for woodworkers to use in pursuing exquisitely designed items. Wood is used to make a wide range of things because of its distinct qualities. Koa wood’s distinctive properties are used to create jewelry.

However, did you realize that you could create Koa Wood Rings by yourself? Don’t worry; we’ve got you covered if you’d prefer to leave all of this in woodshop class and aren’t on the DIY train. There are many ready-made Koa Wood Rings available on woodsmanjewelry.com that are likely to be just what you’re searching for. Steps To Make A Wooden Ring

Cut a strip of wood veneer 10 mm broad using your cutting mat, craft knife, and ruler. Sandpaper can be used to taper one end of the strip to a tip that is as thin as paper. The strip should be soaked in a pan of hot water for 30 minutes to soften the wood.

To achieve this, measure 3 12 cm from the end of your wood and mark it by drawing a line parallel to the width. Use your saw to cut against (not with) the grain after marking your blank. By doing this, it is less likely that the wood will split or the ring’s structure will become unstable over time. For clarity, let’s call this square of wood that we’ve cut a blank. From this point on, it will be what you use to create your ring.

The ring hole must be drilled now that your blank has been created. To begin, make a pen or pencil mark in the blank’s center. Since we’ll be cutting many things down, don’t worry about positioning being exact. When you’re finished, place your blank in a vice and make sure it’s stable. You start drilling from this point. Make sure to select a drill bit whose width is smaller than the finger you intend to use for the wood ring.

Sand the edges of the hole now with your Dremel or sandpaper. For a smoother texture when using sandpaper, it is advisable to start with medium grit and then finish with high grit. Create your ring’s outside shape at random. Depending on personal choice, this may differ slightly, but as a general rule, your outer circle should be about 2 to 3 mm larger than your inner circle.

Sand your ring until it reaches the mark you made in the previous step. To ensure that your sanding is beautiful and even, make sure to keep gentle, uniform pressure. To prevent a flat patch, keep the ring moving continuously. Don’t be overbearing since there is no turning back once you make a mistake. Being patient and paying attention to details is crucial in this situation.

Apply superglue as a finishing touch to protect the ring and increase its toughness. Use a toothpick to evenly distribute the small amount of glue you just squeezed onto the ring. Add eight adhesive layers, letting each one dry completely before applying the next for the greatest results. After that, polish the ring with finer grits of sandpaper and micromesh, a very fine abrasive sheet. 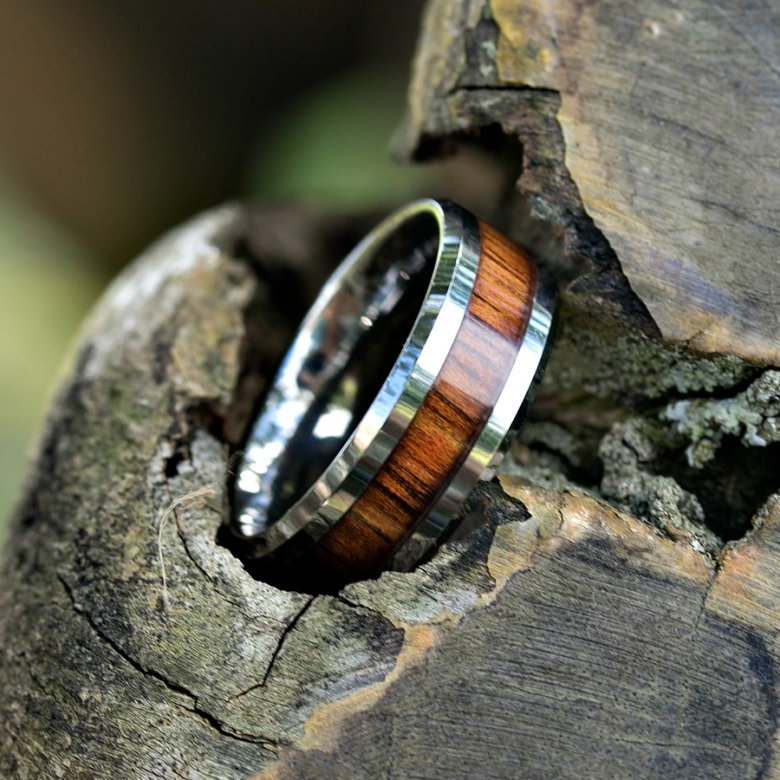 Why is Koa Wood Popular?

For Hawaii’s native people, koa is legendary. It is considered sacred and a part of the Hawaiian heritage by some. The ancient Hawaiians relied heavily on koa for their daily needs.

The Koa tree was widespread in the late 1700s, during the reign of King Kamehameha The Great. Koa, which means warrior and is linked with the tree, was the moniker given to warriors in that era. Everything from canoes and paddles to swords and clubs was made of wood. King Kamehameha and his army used koa wood as a key tool in bringing the islands under his control. Koa became a beloved emblem for Hawaii and was declared “kapu,” or only allowed in possession of Hawaiian rulers.

One of the most beautiful types of wood in the world is undoubtedly koa. Its distinctive figures, hues, and textures make it special. All of these are impacted and decided by the age, elevation, and soil type of the tree. Koa comes in a variety of hues, including light golden blonde, auburn red, and dark chocolate brown.

With the proper maintenance, koa wood may last a very long time. The wood is resilient to abrasion, pressure, or harm. It lasts longer than other trees because it is strong and unbreakable. When made into jewelry, koa wood is also light and water resistant (though not waterproof), making it quite comfortable to wear. Koa wood jewelry is resistant to denting, cracking, and scratching. Beyond its lengthy history and emphasis on sustainability, koa is a wonderful wood that is unquestionably among the most beautiful and unique ones still in existence. It was once utilized because of its abundance, but now it is highly sought after due to its distinctive color and texture. Koa wood has a wide range of colors, unlike other woods, which are limited to a single tone. All of them are stunning, especially when combined with the wood’s peculiar interlocking grain, which gives it a distinctive appearance and makes it sturdy but flexible.

Either you can make it yourself, which surely is going to take a lot of time. Or you can buy them at the link mentioned previously in this article.

8 Things To Never Do At A Blackjack Table!

What to Wear for Swimming if You’re Insecure?

How Big Should Your Wallet Be? 3 Different...

Everything You Should Know About Oil Paintings