PurrVerse: Adult Sex Workers Are Arrested When We “Think Of The Children”

I woke up one morning last week to my Twitter in an uproar. That’s reasonably common in my world, as many of the people I follow are marginalized and there’s a lot to be angry about. Turns out that the FBI has seized MyRedbook, a California site where masseuses and escorts could advertise for clients for free, and arrested two people, Eric Omuro and Annmarie Lanoce,  in connection to “using the mail and the Internet to facilitate prostitution” as well as money laundering under several aliases.

It’s a gray area of sex work, because strictly speaking it’s not prostitution (or maybe is- laws around sex and money are often purposefully vague). I chose it after advertising for years on Craigslist before it was pressured to shut down its adult services (along with Backpage). I didn’t find it to be the best site, but it had decent traffic and I got booked when I put in the effort to hustle. Advertising on the internet and communicating via email creates a paper trail in case I don’t come home some night (a reality many sex workers consider when booking clients), as well as offering the possibility of filtering clients, getting references, and blacklisting people who are bad customers. With MyRedbook, the forum for sex workers, MyPinkbook, is also gone, along with the resources it made available for sex workers to communicate with each other to stay safe when the police are not an option.

It’s interesting that every single time an adult site is shut down, “child prostitution rings“ or “sex trafficking“ are cited as the reasons. Companies like Google throw down big money to support these anti-trafficking measures, even though the statistics suggest the money lines the pockets of organizers more than it helps at-risk populations. I hear how we must think of the children, yet when you look at the statistics of who gets arrested, it’s vulnerable adults who end up in handcuffs. Teenagers who go into sex work are often assumed to have less agency than they do, studies have suggested — sex work provides a sustainable survival method for many homeless youth, male, female, trans and cis. So if they are not all in the danger anti-sex work feminists want us to believe they are, who is getting caught in these police webs?

I spoke to one woman who was arrested for sex work in 2010. The cops used money that was earmarked for child trafficking to instead waste manhours chatting her up over several days before coming in for the sting.

“They basically dicked around with me for days over email,” she told me. “He said he had never seen anyone before and didn’t have references but was willing to meet up with me at a cafe for a meet n’ greet. Honestly? He spent so much time writing that I thought what fucking cop would have the time. There was no way that they could have mistaken that I’m on my own and of age — it’s obviously not a way to target children or pimps.”

I asked my friend, who asked to remain anonymous, what the arrest process was like. 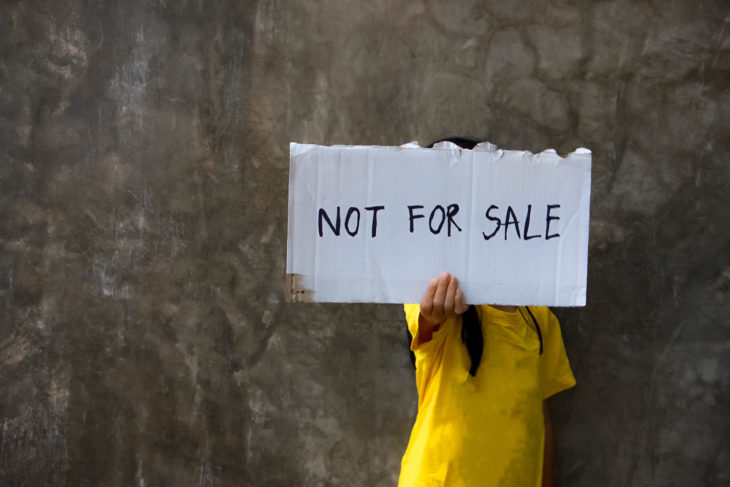 “Oh my god, there were five cops, multiple cars. It was a big ordeal. I was like seriously? This much time, this many people, all for little ol’ me? And they leered, arguing over who got to escort me to the car. The cops asked me so many other really rude and inappropriate questions like… if I was pregnant, if I had any STDs, when my last period was. They took 15 bazillion pictures of all my condoms, trying to shame me. The sheriff was even wearing a shirt with some sort of weird misogynist sexual innuendo.

It was kind of a jerkoff thing for them. They had the funds and they didn’t have anything particularly better that they wanted to do than fuck with me. I was in a cell with a bunch of girls who *did* look young to me, all on the phone crying to their pimps. But as far as I could tell they didn’t get the pimps and they didn’t try to get the pimps. I went to court over it. My lawyer made the lovely argument that hitting me with a record would negatively impact my bright future… which of course is true for anyone, not just those who are white and middle class. But whatever, the case was dismissed.”

I asked her, “Did they even ask you if you were coerced?” I mean, in theory, the whole point of these stings is to save women who are being forced to do sex work by pimps, right?

Welp, they never asked. I guess they were too busy counting her condoms and asking about her sexual health. Makes it pretty clear who, and what, they “protect and serve” — white capitalist patriarchy.

May I remind you how often the police have raped women they’re supposed to “protect,” like domestic violence victims … or sex workers? In San Jose, where I live, a cop was arrested for raping a domestic violence victim after she called 911 for help. Never mind how well the police deal with rape even when another person wearing a badge isn’t involved … many police officers, when asked, hold to concepts of “rape-rape” (violent stranger in the bushes) as the main definition they look for. It doesn’t particularly give me a lot of faith that the police are the best people to deal with the traumatized women and children that these rescue missions are supposedly for. Why anyone would think the prison industrial complex which fails women so often when it comes to rape reports and convictions would be the right way to go on this boggles the mind.

In short, no, I do not trust the police have my best interests at heart, and I’m a privileged white cisgendered woman. Basically, it seems to me that California is determined to ensure that women who go into sex work die on the streets, at the hand of an abuser who will go unpunished, or in jail. That would, of course, include me, and many people I know …. particularly the trans women and women of colour.

I asked my friend what she thought about the MyRedbook bust. She was pretty cynical.

“Let’s be realistic here. This isn’t about helping trafficked sex workers. They want his 5 million dollar property. I mean, that’s some nice loot.”

Between this and the mandated condom bill, AB1576, I’m so grateful that anti-sex work feminists care so deeply for our wellbeing that they’re pushing sex workers to desperation by removing our only methods of making money without any solutions for how to survive financially. It’s great to see how they’re happy to offer us makeup and cupcakes but not practical resources like job connections, education funding, and medical support. What could possibly go wrong?

The next time you read some hysteria about child prostitution stings, look at who gets arrested and how the arrests go down. At-risk people are put at more risk by these measures, and it needs to be exposed for what it is — supporting, not women and children, but the corporate, patriarchal status quo.