Rainer Plank and The Gate of Return

Looking Back and Learning

The 21st century has afforded us all a chance to look back at our collective history and learn from our mistakes, atrocities, and triumphs. As Americans, our nation is far from being reproach, especially with regards to the very early days of colonization.

In particular, the genocide of the Native Americans and the Transatlantic Slave Trade have continued to have a grim legacy as American history continues on. It’s often difficult to understand the full effects of the slave trade. The African continent has suffered a great deal during and ever since the Transatlantic Slave Trade. In fact, human trafficking remains a major issue.

Many African countries have seen significant amounts of human trafficking and even slavery in recent years, which, in a time when so many others are safe from these concerns, is simply unacceptable. Fortunately, there have been a number of charitable efforts that focus on protecting the dignity and wellbeing of all human beings.

We’ll be looking at one event that has its sights set on Benin, a West African country with a long and frightful history of participation in the slave trade. Ouidah, a historic commercial city located in what is now Benin, is believed to have exported “more than one million Africans before closing its trade in the 1860s” (Source: Slavery and Remembrance).

A group of philanthropists is looking to move forward from that dark history while still acknowledging the horrors of hundreds of years of the slave trade.

The Gate of Return Marathon & Festival 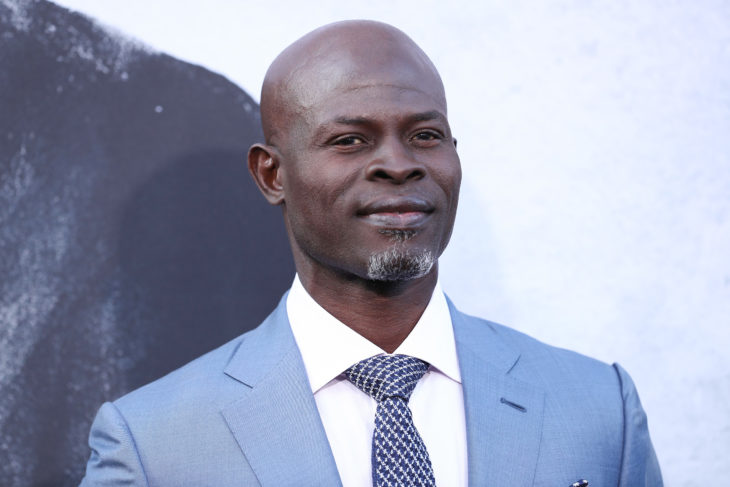 The Gate of  Return Marathon & Festival is the brainchild of award-winning actor Djimon Hounsou, founder of the Djimon Hounsou Foundation. If you’re not familiar with Hounsou’s work, he has starred in movies like ‘In America’, ‘Amistad’, has earned two Oscar nominations, and plays Korath in the Marvel CInematic Universe.

The Gate of No Return itself (also referred to as the Door of No Return, recognized as a UNESCO World Heritage site) is a physical monument located in Ouidah, Benin, which serves as a memorial to the many Africans who were enslaved and forcefully removed from their homes and families.

The marathon, organized by Hounsou with the help of renowned marketing executive Rainer Plank (Head of US Operations and Creative Director of ZOOOM Productions), will pass through the gate itself, a symbolic act of return and an end to the African diaspora that began hundreds of years ago.

Speaking with Plank recently, we learned all about the event, its goals, its details, and its potential impact. Plank began by breaking down the massive scope of this event series.

“We intend to create an event series that incorporates different African countries such as Ghana and Senegal, but also the United States and Europe, the other two continents partaking in the transatlantic slave trade.”

So far, the marathon and festival is set to take place in 2022. Those wishing to stay abreast of the latest updates can sign up for the official newsletter at gateofreturn.com.

“Djimon decided that his newly founded foundation should not only reconnect the Peoples of the African Diaspora with their motherland but also combat modern slavery and human trafficking.” 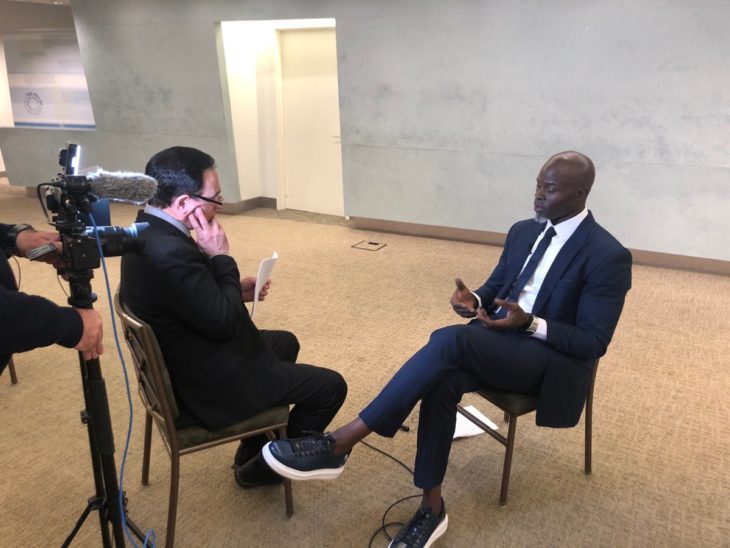 So how did the Gate of Return Marathon & Festival become the first major event series from the Djimon Hounsou Foundation?

Having recently formed the Djimon Hounsou Foundation, Hounsou wanted to make sure that the foundation would be doing important work. Hounsou and Plank had discussions about the mission statement of the foundation and what the core focus would be.

“Looking back at Djimon’s career, it soon became evident that the films he starred in were closely intertwined with the theme of slavery. In particular, Steven Spielberg’s movie ‘Amistad’ explores the fight of West African slaves for freedom following a revolt aboard a Spanish slave ship. Djimon told me that this particular film opened his eyes to how many people’s lives were crushed by the inhumane trade. Djimon decided that his newly founded foundation should combat modern slavery and human trafficking.”

As we alluded to earlier, slavery is sadly not relegated to the past. Modern-day slavery and human-trafficking are still a major issue, and not just in developing countries. According to ansti-slavery.org, there are currently an estimated 40.3 million enslaved people around the globe, including roughly 10 million children.

Forms of slavery have changed slightly, but modern-day slaves are still forced to work without compensation, are forced to marry, or are coerced to work to resolve debts. It goes without saying that these numbers are unacceptable. Every country on the planet is still dealing with slavery in some form, and it’s going to take big and small-scale action to correct that.

The Djimon Hounsou Foundation seeks to aid in the fight against modern-day slavery, and the Gate of Return event series is an important step toward that goal.

Origins of the idea and development

I wanted to dig a bit deeper and understand the origins of the idea for Gate of  Return.

In the words of Djimon Hounsou himself,

“My dream for the Gate of Return Marathon is not only to become a symbol of the triumph over slavery, but to heal the wounds slavery left behind and to champion a visceral connection from the diaspora to the motherland.”

For so many through the years, slavery has severed the connection between individuals and their homeland. This event series has a primary goal of beginning to reform that connection.

As for Plank and his role in the development and shaping of the idea, he first connected with Hounsou last year.

“In June of 2019, Djimon Hounsou told me about his idea to host a marathon that commemorates 400 years of the Transatlantic Slave Trade in his home country, Benin, West Africa, and asked me to develop the concept further. Over the following four months, I did a lot of research and fleshed out the concept for the Gate of Return Marathon & Festival in close collaboration with him.”

As Plank explained during our discussion, the route and the cities chosen for the marathon are heavily symbolic of the Transatlantic Slave trade as a whole. Participants will travel from Cotonou to Ouidah, which, as we mentioned above, was a major hub for the slave trade for hundreds of years.

For millions of slaves, it was the last time they would see the home and the people they loved.

The marathon reverses the direction, converting the route as a whole and the monuments that mark it.

“By running through the Gate of Return from the ocean landwards, our event participants symbolically convert the monument into a Gate of Return. They then continue along the UNESCO slave-route into Ouidah. The marathon will be accompanied by a two- to three-day festival in which the participating countries will celebrate African culture by showcasing their music, foods, and arts.”

Once Plank and Hounsou had settled on the core idea for the marathon, they started on the process of earning the participation of Hounsou’s home country, Benin, and his hometown, Cotonou.

The two presented their plans to the government of Benin. Thankfully, the Benin government were more than happy to become the first host country for this event series and have been working directly with Plank to make the marathon memorable.

While Plank is well aware that there are limits to what the event can accomplish, the core concept and messaging are extremely positive. More than anything else, the Gate of Return event series presents an opportunity for healing and celebration.

“While we cannot heal the wounds of slavery we aim to help people to reconnect with their roots, discover where their ancestors lived, and celebrate unity. We believe that this is a very important message to spread, especially in the environment we live in today.” 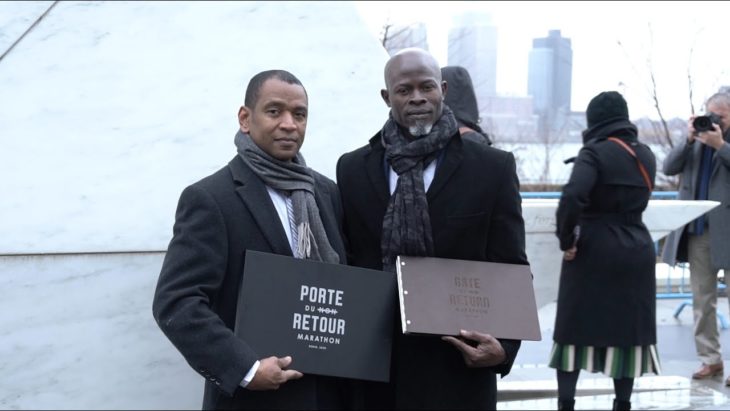 As a marketing executive, Plank brings a highly useful set of skills to the nonprofit and charity space. He also has strong feelings about the role that companies need to play when it comes to larger issues.

The paradigm has shifted in recent years, and the general public now has high expectations for how companies treat their customers, their employees, and the environment as a whole.

I asked Plank about the duties and responsibilities of companies in the 21st century and how his marketing skills can be used to promote positive goals. Here’s what he had to say.

“As the Chief Operating Officer and Creative Director of ZOOOM Productions, I closely follow the efforts of the outdoor industry. Companies have the responsibility to give back and stand for something bigger. Mindless profit maximization doesn’t cut it anymore. Working for the Djimon Hounsou Foundation as Communications and Creative Director, I hope to incorporate the lessons of role models who have come before us.”

Working for the Djimon Hounsou Foundation has given Plank a special opportunity to affect positive change while also working alongside an artist he admires.

Collaborations like these can also potentially serve as an example of how performers and business-minded individuals can work together to promote ambitious philanthropic goals and resolve social and political inequality and mistreatment.

We can only hope that The Gate of Return event series will encourage further action to end modern-day slavery and nurture victims of this terrible industry. Empathy can go a long way to fixing problems both big and small, and it’s projects like these that can help further public sentiment towards unity and understanding.

If you’d like to learn more about modern-slavery and how you can help, feel free to visit antislavery.org as well as endslaverynow.org for a list of organizations that combat slavery in the modern world.

Things Everyone Should Consider Before Purchasing Air Purifier