I dislike Mitt Romney and his politics as much as the next liberal. But I draw the line at inane knee-jerk reactions to the name of his new adopted grandchild.

See, Ben Romney and his wife Andelynne Romney (above) adopted a newborn baby boy. The 23rd grandchild in the Romney family  (not 22nd, as tweeted) is a little Black baby named Kieran James Romney. Some folks on Twitter are upset that in Gaelic, the name Kieran means “black,” “little dark one,” or “dark skinned.” They seem to be suggesting Ben Romney, a doctor, and his wife chose intentionally to stigmatize the child by effectively naming him “Black Romney.” 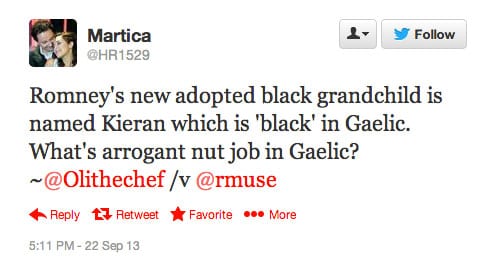 I have no more insight into Ben Romney’s baby-naming thought processes than these people on Twitter do. It’s possible that Kieran was adopted with his name already chosen by his birth mother/birth parents. But I suspect if the Romneys did pick the name “Kieran,” they wanted a vaguely WASP-y-sounding name. Preschools across the country are filled with Callums and Colins and Madeleines and Lilys and Kieran is just another name from that set. Or heck, maybe they’re huge Kieran Culkin fans. Mitt’s probably got a lot in common with the uncle in “Igby Goes Down.”

In all seriousness, though, Ben Romney and his wife would have to be pretty messed up to name their Black child “dark” on purpose as a way to make the child feel different. Criticisms that the adoptive Romney parents had sinister intentions are a bit unreasonable. As much as I think Romney grandparents are tone-deaf about class and race privilege, assuming Ben Romney purposefully named his kid “Black” — or even adopted a Black baby so his dad can appeal to minority voters in some future election — is for too cynical for the newborn baby warm and fuzzies folks should feel.

I also think it’s ignorant to assume Ben and Andelynne Romney will automatically, by virtue of their own white privilege, fail at raising a Black son in a mixed-race family. There are  real and legitimate concerns about children of color adopted into white families — even more so, one could argue, when the family is under a magnifying glass. I’m reminded of the McCain family, who also has an adopted child of color, and were targets of vicious rumors during the 2000 Republican primary election. Kieran, as a Black child, may well stick out like a sore thumb in the lily-white billionaire circles frequented by the Romneys. That doesn’t, however, mean he will be abused or mistreated by his adoptive parents or even his grandparents, clueless as they may be. (For anyone interested in this general topic, I highly recommend reading Kathryn Joyce’s book The Child Catchers: Rescue, Trafficking and the New Gospel of Adoption, which delves deep into the subject of mixed-race families and adoption.) Given the fact that all we can know right now is that there’s a very happy baby with a clearly ecstatic new adopted family, it’s sucky to read on Madame Noire, “My friend even texted me saying she said a serious prayer after she saw the picture.”

Let time tell, rather than making judgments based on the adoptive parents’ skincolor. I’m happy a chubby little baby has found a forever-home. I’m happy the birth mother, if she has an open adoption and is aware of her son’s new parents, can sleep somewhat easier at night knowing little Kieran won’t financially want for anything in his life. And I hope that the Romney family, all of them, do raise their consciousness about race more with little Kieran now in their life so he does not want for anything spiritually or emotionally either.

Decode My Dream: A Confusing Reunion With An Old Flame