“RuPaul’s Drag Race” Crowned A Winner, But Was She The Right One?!

America’s next drag superstar was crowned last night, amidst sequins and glitter and a shirtless, gyrating Pit Crew. The winner was … not who I expected.

After a lackluster season finale that was heavy on the sob story and light on the tea, young upstart Violet Chachki, the queen with the fiercest looks, the shadiest mouth and the tiniest waist, snatched the crown from reigning queen Bianca DelRio, upsetting the patrons of bar I was watching from, as well as me and my roommate. We are not alone. Ginger Minj should have snatched that crown, and placed it upon her wig. We should have been watching her accept the honor with the grace, dignity and ribald humor that we’ve come to love. I won’t go as far to say that she was robbed. That honor belongs to Katya, who was eliminated in a devastating lip synch by the inimitable Kennedy Davenport who slammed her crotch into the ground of the stage over and over again, hitting the splits in six inch heels.

Violet was up against some relatively stiff competition. Ginger Minj had the whole package — a queen with the looks, the comedy chops and the acting talent to truly embody what America thinks of when they think of drag. She even told Jezebel’s Julianne Escobedo Shepherd that “her dream was to follow in the footsteps of not just RuPaul, but Divine and Harvey Fierstein.”

That’s the drag that we’re all familiar with. That’s the drag of the queens that line Commercial Street in Provincetown every summer with fliers, promoting their midnight shows, chomping gum, smoking cigarettes and dancing a quiet two-step to whatever Britney Spears remake is pumping out of the club they stand in front of. But, as Shepherd pointed out, the similarities between Ginger and Season 6’s caustic, abrasive and brutally funny Bianca DelRio, are many. We wouldn’t keep watching the show if the same cookie cutter representative of the multi-faceted culture of contemporary drag stomped the runway to receive her crown. Like everything in popular culture, drag changes with the ebb and flow of taste. As RuPaul is fond of pointing out, it’s America’s Next Drag Superstar. Violet, with her youth, her beauty, and her confidence that borders on arrogance just might be the face of modern drag, now. 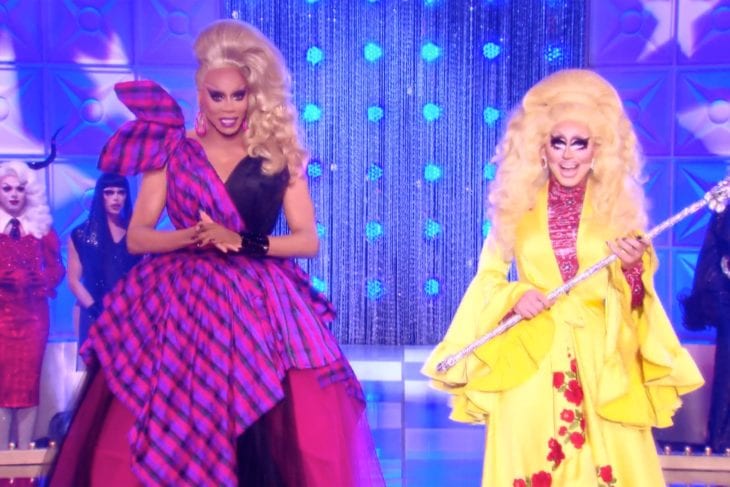 It’s not like Violet doesn’t deserve it. Her fashion throughout the entire season has been breathtaking to watch, and her interpretation of each week’s theme has been among the most original and unique we’ve seen, sitting comfortably in the ranks of geniuses like Raja. Please feast your eyes on one of the first looks we saw her in, a sequined black dress with kicky plaid cap that transforms into a ridiculous red and black plaid sequined jumpsuit. See that belt she leaves on the runway? That’s all the fucks she had to give. Out of sight, out of mind.

Before we sign off on this season and put it to rest, let us not forget the shining lustre of Pearl, the sleepiest baby queen to ever exist on television. For much of the season, Ru and the judges were hard on her, berating her time and time again for her sleepiness, her lack of personality, her seeming ability to float through the competition by turning it out on the runway, but being a blank, uninteresting slate in the workroom and in the challenges. But when Ru came for her in the workroom, our little Pearl climbed out of her seashell and snapped. The fire she so sorely needed was now blazing under her tiny, pert behind.

Bless the queens of this season, for they were, for the most part, talented and funny and smart and wise and beautiful. Ladies, take us out.

The Daily Squee: Watch Kitties Play In A Sea Of Cardboard Boxes