I love my friends, really. But there are times when, despite my best efforts, I cannot get it together to hang out. I know you’ve been there. Maybe it’s because the weather is crappy, or you’re just feeling off. Or maybe it’s because — and let’s get real honest about this — there’s a marathon of “America’s Next Top Model” on the Oxygen Network, and it’s the Crazy Lisa season. You love Crazy Lisa!

“In terms of like, instant relief, canceling plans is like heroin.” said comedian John Mulaney, and I can kind of see what he means. It’s so nice to have a clean, unplanned afternoon, a large swathe of time where you can do whatever the hell you want. And sometimes, the pressure to socialize — especially for us introverts — can feel overwhelming. Whatever the case, there are ways to bail, and there are things you should avoid doing if you don’t want your friends to hate you/think you’re an incorrigible flake.

DO: Express how much you wish you could be there.

DON’T: Don’t just ghost completely and pretend like your absence won’t be noticed. It will! Your friends will talk about what a dick you are for completely falling off the face of the earth, or they’ll worry that something bad has happened to you.

DO: Let your friends know as early as possible that you won’t be able to make it, especially if you’re supposed to hang one on one. Give them ample time to come up with alternative plans if you can’t make it.

DON’T: Be a dick. You’re a dick if you show up really late or change your mind at the last minute when something better comes up. 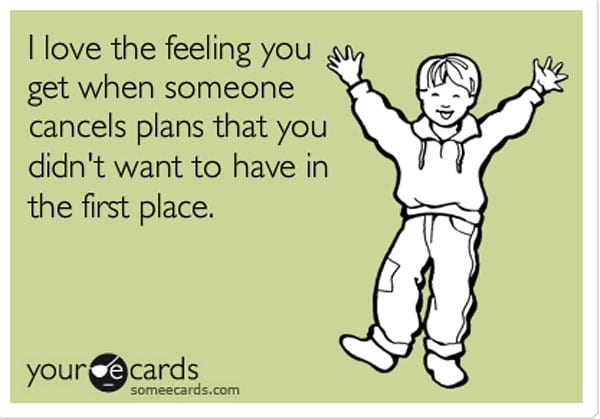 DO: Offer up an alternative and concrete plan if you really do want to see the person, such as “I can’t make it tonight, but there’s a new bar I’d like to try out and I’m free next Wednesday if you’re around.”

DON’T: Tell the person you’re canceling on about this other really cool thing that came up instead. They don’t need to know that you’re blowing them off for someone else. And that goes double for social media:  Nobody wants to see pictures of the fun thing you did instead of hanging out with them. Have some decency!

DO: Be honest about your intentions — to yourself and others. In general don’t commit to something unless you truly intend to go. “If I’m not sure, I’ll usually give a non-committal response such as ‘I have a lot going on this weekend, but I will try to stop by if I can,’” advises Amelia. “Or, ‘I’m busy that day, but will text you if I can stop by.’”

DON’T: Give an excuse, but don’t overcompensate with an overly long, complicated one. I did this for years because I felt so guilty anytime I couldn’t make it to something but I’ve realized it just makes it worse. Sometimes it’s OK to give a white lie, but don’t make it something outrageous, like “Oh my God my boyfriend is so sick and I need to be home with him,” because then you involve another person in your shitty lie.

DO:  Be sincere. “Usually I cancel because I’m an introvert and I want time alone,” said Jessica. “I’ve found it’s easier when I explain that to people instead of saying ‘I’m tired.’”

DON’T: Cancel on the same person repeatedly.  If you keep rescheduling plans, acknowledge that you might just not want to hang out with them. It’s okay! Some friends are just email friends, or text friends, or see-you-on-the-street-and-wave-and-keep-going friends. 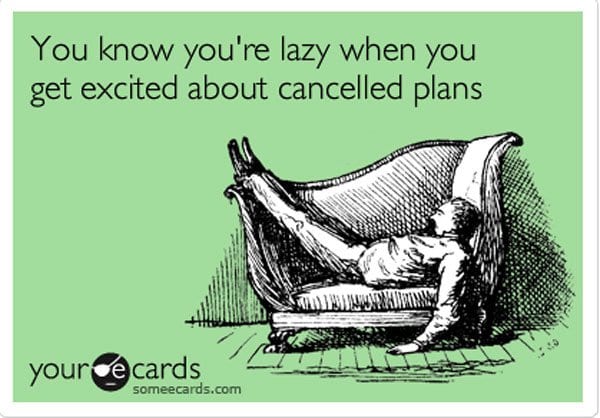 DO: In general, be understanding if someone cancels on you and hope that they’ll return the favor in the future.

DON’T: Overbook yourself. That way you’re less likely to have to cancel on anyone. Chronic double and triple booking will not give you options, it will give you headaches. Try to avoid it.

DO: Offer to do something nice for your friend if you’ve gotta bail. Says Amelia, “Depending on who I’m bailing on, sometimes I basically buy my way out of hanging by promising that dinner next time is ‘on me.’”

DO: If you’re gonna lie, make the lie realistic. Also, don’t lie about something terrible — my, uh, grandma is really sick! — because that’s bad karma.

DON’T: Cancel if it really is an important event for your friend, or if you know that your canceling will cost your friends money — say, when your friend’s already paid for a ticket to a concert for you. If you absolutely can’t go for some reason, you should still either A) buy the ticket or B) find an agreed upon person to take your ticket.

DO: Say your sorry. Seriously, it can go a long way.

The Worst U.S. Cities To Live In During A Zombie Apocalypse

What is the Best Medicare Supplement Plan?