The End Zone: JJ Watt Is Just Having The Best Damn Time Of His Life This Season

Houston Texans defensive end JJ Watt is having the best damn season of his life, what with all those touchdowns he can’t seem to stop scoring. After single-handedly running the Tennessee Titans ragged this weekend (sure, Texans QB Ryan Fitzpatrick had a monster six touchdown game, but this was clearly the Watt show), the MVP talk surrounding Number 99 has reached fever pitch. But while Watt has proven he’s worth the hype, is he really an MVP candidate? 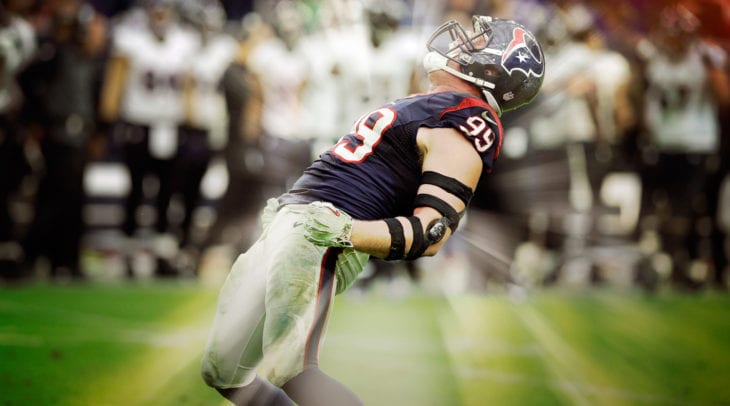 Let’s start with those five touchdowns this season alone. As a defensive lineman, the majority of those scores have come on, well you guessed it, defensive plays (though, as he showed off in Sunday’s matchup against the Titans, when he lines up at offense, no one wants to come between him and the endzone). Teammate DJ Swearinger put it best when he told reporters after Sunday’s blowout, “You wouldn’t find another defensive lineman with five touchdowns; you don’t find some tight ends, some offensive players don’t have five touchdowns. Five touchdowns speak for itself. Not even speaking about what he does on defense. … If you watch the games, you see 99.” To put that in perspective, Philadelphia Eagles running back Lesean McCoy, the top ranked running back going into the 2014 NFL season, only has four touchdowns this year.

But is one splashy season enough to compete with the likes of Green Bay Packers quarterback Aaron Rodgers, who snapped the Patriots’ winning streak this Sunday, or Indianapolis Colts quarterback Andrew Luck? ESPN seems to think so. “It’s been 70 years since a defensive lineman of any kind had at least five touchdowns in one season — and back then they played on offense regularly. It’s been 66 years since a player at any position has had at least three offensive touchdowns and two defensive touchdowns in a season, according to the Elias Sports Bureau. No player has ever had three offensive touchdowns, an interception returned for a touchdown and a fumble recovery returned for a touchdowns in one season.”

This is a monster season Watt is having, both statistically and anecdotally. That MVP rumbling is very real – and all the more deserved when you look at the fact that in NFL history, there have only been two defensive linemen to earn the MVP title: Alan Page in 1971, and Lawrence Taylor in 1986. Greatness has come to be expected from quarterbacks and receivers, and in that sense, Rodgers and Luck are both very much still part of the conversation, but Watt? He’s an aberration from the norm. Especially on a Texans team that’s spent the last few seasons battered and barely holding on, led just last season by the perennially disappointing Matt Schaub. Watt hasn’t just helped his team win a few games, he’s invigorated a franchise.

Plus, he’s having a shit ton of fun while he’s doing it. Here he is doing the Nae Nae after scoring a touchdown on an interception against the Colts.

Here he is explaining that he wasn’t entirely sure if it was the Nae Nae or the high step.

There was that time earlier in the season that he sacked Titans’ QB Zach Mettenberger, and then mocked Mettenberger’s love of selfies right after.

This Cat’s First Time In Snow Will Make Your Day