The Drihanna saga continues. In the past week or so, we’ve watched Drake profess his love for Rihanna with a billboard and during the MTV Video Music Awards. Then, a couple days after Drake admitted to being in love with Rih since he was 22, a mysterious drakeandrihanna.com website made a sudden appearance. At first, the website had Drake’s 6 God logo along with a countdown ending on Sept. 8, and fans immediately began to come up with theories about the countdown. Could there be another Drake and Rihanna collaboration on the way? Was it a countdown to them finally revealing their relationship? Or, maybe it was their wedding date? No one seemed to know, and it was driving everyone insane.

While fans were certainly curious about the website, music blogs were in a frenzy to find out the scoop on drakeandrihanna.com, though it was no surprise when Genius.com reached out the Drake’s camp and soon confirmed that the website was not associated with Drizzy at all. Of course, this news brought up more questions than answers about who created the website and why this person decided to troll the internet in the midst of the Drihanna mania.

It turns out the mastermind behind it all was none other than Joanne the Scammer. 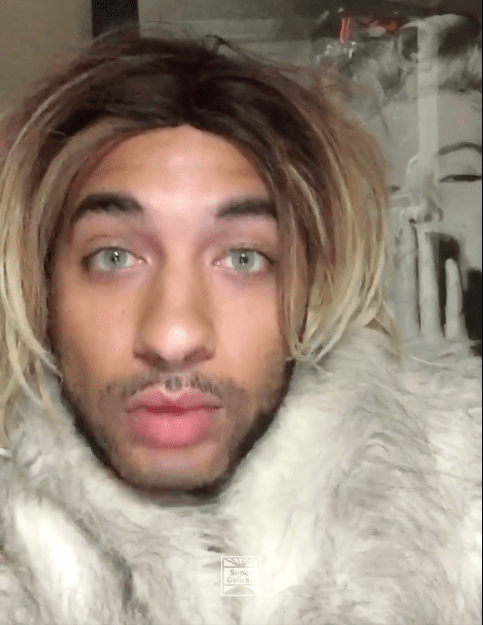 Joanne, a character created by internet sensation Branden Miller, has become a popular figure on social media through short clips of her harassing her ex-boyfriend’s new wife (while wearing fur coats, no less), bragging about her “Caucasian” roots, and showing off all the spoils of her scams. Her scamming ways have become so popular that she found herself in attendance at the MTV VMAs with Drake and Rihanna, where the idea for the website hoax was born.

Joanne took to drakeandrihanna.com and replaced the countdown with a two minute clip of her addressing why she created the website, along with comedy website Super Delux. She started the video with “Work” playing in the background while she smiled at the camera. Suddenly, Joanne commanded Rihanna to shut the fuck up (as only Joanne can) and began her rant about why she was so pissed off.

According to her, she was there with her “Kris Jenner wig” and ready to take a picture with Drake, but he was only there for Rihanna. Joanne said her feelings were hurt and warned the rapper to never email her again because she won’t respond. Well damn! Drake, it looks like you messed up. Truly. Honestly. Check out the clip of Joanne the Scammer on the website and prepare to laugh your ass off.

I must admit, I started laughing hysterically when I saw Joanne’s face pop up on my computer screen. She’s one of my favorite people to follow on Twitter, and I live for her hilarious clips and never-ending dragging of the “lower class.” And now that she’s pulled off one of the most iconic scams of her career, I have to give her even more love for making us all look crazy.

A Picture Of James Dean Pissing Can Be Yours

Stop Judging The Olsen Twins, Who Are Grown-Ass Women, For Dating Older Men

12 Most Anticipated Music Releases in 2023