The Soapbox: Tyler Perry Has A Rape Problem In “Temptation”

Usually movies like Tyler Perry’s “Temptation: Confessions of a Marriage Counselor” are right up my alley. You don’t see a Tyler Perry film because you’re under any illusions it will be good. At their best, Perry movies excel at hitting the sweet spot of terrible, the kind of bad movie you can’t wait to pick apart with your friends afterward. Why else did I go see “Twilight: Breaking Dawn — Part 2″ in theaters? I was under no illusions I was seeing a good film. I wanted a glorious waste, and boy, did I get my money’s worth. Michael Sheen’s evil laugh was worth the price of admission alone.

Like Tommy Wiseau’s “The Room,” Perry’s films aren’t so much made as they are loosely cobbled together, and it’s fun to point out the seams in his craftsmanship. The sound design is terrible, the acting is all over the place and the film takes place in about seven different genres simultaneously. “Temptation” can’t decide if it wants to be a melodrama, high camp, a morality play, a broad comedy, a Lifetime movie or a potboiler, so it makes the proceedings into a $5.99 buffet — a little bit of this, a lot of that, doused with camp and unintentional humor. Douglas Sirk would have loved Tyler Perry.

However, despite my best efforts to find the film funny, there’s something immensely troubling about the morality slopped in with Perry’s genre stew. The film is about a Christian woman’s destructive sexual awakening and an affair that leads her away from her marriage. “Temptation” initially feels like a rebuttal to readers of Kate Chopin (or, heaven forbid, E.L. James) showing how passion can destroy the stability we take for granted. The main character is the therapist for a “Millionaire Matchmaker”-type who has her wandering eye on a billionaire client. He looks like a male model, is named Harley and drives a red sportscar. He espouses the belief that humans should have sex like animals. 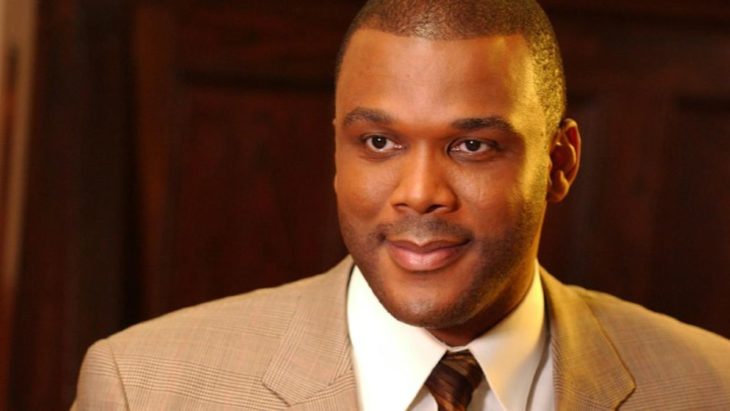 Because the film is symbolically literal about everything, his choice in car color makes him the devil. All he was missing was a twisty mustache and a license plate that says “BADGUY1.” “BAD GUY” was already taken. If you can’t figure out where this is going, you’ve never seen a film.

Except that it doesn’t go where you think it will, exactly. The sexual tension unfolds as the two work late nights and Harley routinely makes his intentions with our daughter clear. However, our protagonist, Judith, repeatedly reminds him she wants none of it, asserting, “I’m very married.” It’s clear that Judith wants him — or wants a sexual alternative to her complacent marriage — but she resists. We can’t have everything we want, or I’d be fucking the cast of “Mad Men” right now. Instead, I have to pine for Jon Hamm from afar. It’s a cruel fate.

However, Harley doesn’t accept no for an answer. Literally. He orchestrates a situation where Judith is tapped to fly to New Orleans with him as part of her job. Judith’s boss (played by Vanessa Williams with a distractingly bad fake French accent) tells her to keep her wits about her and not put herself in any compromising positions. Although I didn’t realize it at the moment, her boss was telling her “not to get raped.”

I didn’t put two and rape shame together until Judith and Harley sat alone together on his plane, coming back from their trip. After a personal conversation, Harley begins to make advances. Judith resists. She tells him to stop. She tells him no. She fights him. Harley then firmly places his hand on her chin, holding her face still. He reminds her that she wants this and then offers her solace: “You can say you resisted.” At no point does she offer her consent to this sexual liaison, and after Harley drops her off at her apartment, Judith insists that she never wants to see him again. She looks at him with disgust and disdain, not like a woman who had lived out a naughty sex fantasy.

She looked like someone who had been raped. It would have been easy to include any detail that shows the audience she wasn’t and show us there was consent involved. “Yes?” “Yes, please?” Even a simple head nod? Nothing.

Yet the movie doesn’t seem to see it this way or looking at Judith as a victim, and Perry insists on punishing her in increasingly over-the-top ways (for forsaking Jesus or something). When she comes home, Judith immediately runs into her mother, an Evangelical zealot who is the vehicle for the film’s twisted, Old-Testament morality. Judith’s mother vaguely resembles New York’s mother from “Flavor Of Love” and radiates all the same charm and wit. Through wild, snake-handling eyes, she warns Judith about Harley, smelling a rat. She reminds Judith, “It’s easier for a camel to pass through a needle than it is for a rich man to enter heaven.”

In most movies, Judith’s mother would be quickly disposed of, but in this one, her moral martial law wins out. The movie decides that Judith’s experience wasn’t rape because a) he’s rich b) he’s hot and c) she liked it! so Judith leaves her Men’s Fitness magazine husband for Harley. Only in a Tyler Perry movie would Lance Gross, whose six-pack has a six-pack, play the dumpy husband.

Immediately, Judith gets involved with sex, drugs, rock ‘n roll ,and homosexuals, who are seen making out in the background of one of the parties she attends. I’ve never seen a literal den of sin in a movie before, but Perry pulled it off. I half-expected to see a sign that said “Hail Satan!” on the wall. Sounds like my kind of place. 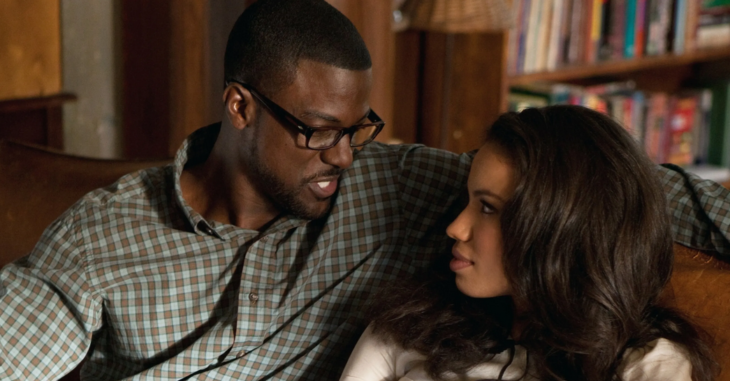 The movie shows Judith almost no compassion whatsoever for being the victim of abuse, so Tyler Perry ramps up her sexual assault with domestic violence. Shortly after she and Harley become kind-of exclusive (there are none-so-subtle hints he’s seeing other women), Harley starts to become territorial and physical toward her, culminating in a serious act of violence that leaves her face bloodied. Because her ex is painted as the cartoonishly forgiving White Knight, he is charged with saving Judith, carrying her back from the threshold of her transgressions back into Christian morality.

However, the movie has a surprise up it’s sleeve. If you thought “Temptation” was done slut-shaming, you are sorely mistaken. Judith’s dalliance with Harley not only ruins her relationship but also leaves her with a limp and AIDS — because Harley gave her HIV. We flash forward to the future where she is now cordial acquaintance, who has moved onto a hottie with a family, and the movie decides to take her beauty away from her — in a bizarre, last-minute twist.

All of this could have been avoided if she had listened to the Sad HIV Girl, played by Brandy Norwood, who was Harley’s ex and also the victim of abuse at his hands. How do we know she’s sad? Brandy only has one lamp in her house; because when you have HIV, you can’t afford overhead lighting.

Even if Judith hadn’t been raped, the movie would have engaged in beyond-the-call-of-duty slut-shaming, more severely than I’ve ever seen in a film before. Perry (who writes and directs all of his films) sends the message that women who step outside of their marriages deserve to be abused and shunned — to wind up the sad old church lady who limps off to worship. This is not hyperbole. This actually happens. And if that woman is raped, well, she had a choice. She can say she resisted. 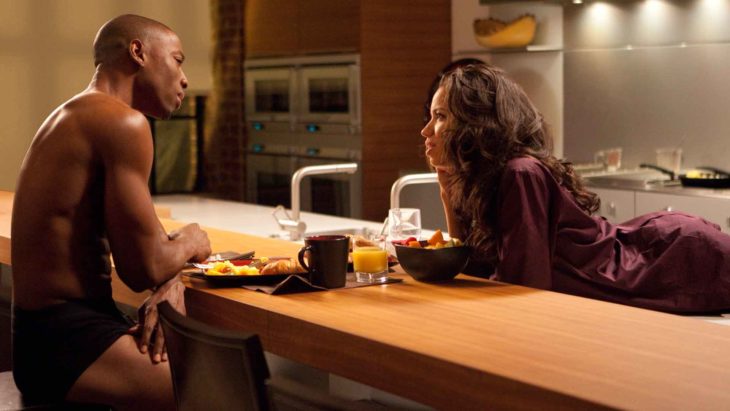 This is not the first time Perry’s films have dropped the ball on domestic violence — as they commonly make light of abuse. This is the norm, especially in an industry where slut-shaming is all too common.

As we embark on another year of reflecting on domestic violence and abuse for Sexual Assault Awareness Month, this is a sad message to send to women, who make up the core of Perry’s audience. In the theatrt I saw it in, attendees were talking back to the screen, ribbing the film for its tackiness and poor quality, but just as often, I heard praises of “Amen!” during the film’s more morally overt moments. For an audience that doesn’t often have movies made for them, Tyler Perry movies are like going to church.

However, we must also be careful what we are worshiping. Next time, if Tyler Perry really wants to make a movie about women’s experiences, he should start by having the empathy to support their struggles. Instead of shoving dogma down our throats, he should listen, stop judging and start learning. Tyler Perry detailed his own history of sexual abuse on Oprah, asking for empathy and compassion from the studio audience. Why can’t he show the same compassion to others?

Dogs In Pantyhose Is Something A Cat Would Never Stand For