Warning: I don’t recommend that you watch this while in the public eye, at a coffee shop, as I just did. I’m no stranger to tearing up in public, but if that’s something you rather not do, wait until you get home to watch this video of Kristin Chenoweth and Idina Menzel singing “For Good” from Wicked. May this serve as a reminder that  there are more musicals out there than Hamilton. From my understanding, Hamilton goes above and beyond what any other musical has been able to do, but other great musicals still exist. Wicked, although a bit corny and traditional in style is still a damn good show.

Along with film and television, Broadway has a bad habit of forming production teams and casts that are predominately male. Even with this list of 2016 Tony nominees, only one of the 5 directors nominated — Liesl Tommy for Eclipsed — is female. 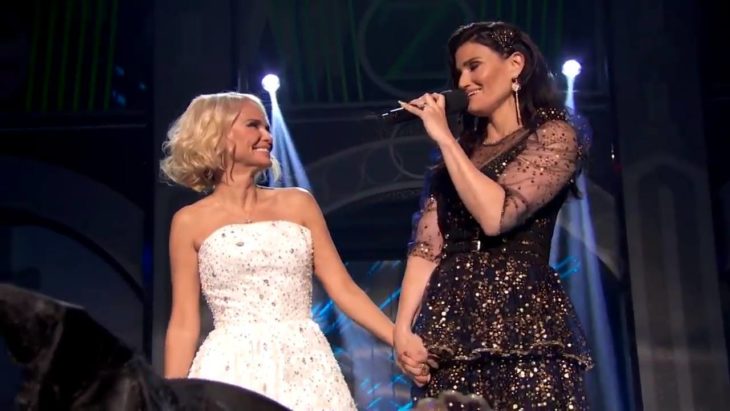 Wicked is a powerful, pivotal musical when it comes to the history and the future of Broadway. The central focus of the show isn’t a woman trying to pursue a man — yes, there is romance in the show — but the show, at its core, is about two women and the impact that they have on one another. The only other show on the list of top 10 highest-grossing musicals to do this is Chicago.

I was a freshman in high school when Wicked came to broadway and I remember my 14-year-old self leaving changed and inspired “for good.” The show — and this song especially — reminded me so much of the relationship I had with my sister at the time and still do to this day.

I mean, these lyrics are just lovely.

I’ve heard it said, That people come into our lives
For a reason
Bringing something we must learn.
And we are led to those
Who help us most to grow if we let them.
And we help them in return.
Well, I don’t know if I believe that’s true
But I know I’m who I am today
Because I knew you.

Kristin Chenoweth and Idina Menzel, the two icons that originated the roles of these beloved witches, have reunited 13 years after the show’s debut back in 2003 to remind us that the theme of this song will never expire and that they’re still badass performers.

This is not only a moving performance, but a brilliant publicity move to remind us that Wicked still exists. While I would probably find the show a bit boring and cliché today, I think it is — if nothing else — an excellent alternative for when you aren’t able to get Hamilton tickets.

Why Is Donald Trump Being Targeted By Free The Nipple Protesters? It’s All About the ERA, Apparently

What are the Best Shows in Branson?