True Story: I Worked As A High-End Stripper

What do you feel about going topless?” he asked me over the phone. I hesitantly replied, “Well, I guess I’m okay with it. But will they be able to touch my boobs?” There was an awkward pause on the other end of the line. “Yes, but you’ll never have to do anything more. I promise.”

A few days earlier, I’d been scanning Craigslist for part-time gigs and came across an ad that seemed too good to be true: “Beautiful college girls sought for nightclub modeling. Receive up to $1000/night. Email pics.” I answered and said that I was a 21-year-old student and attached some cheesy iPhoto shots.

It was January of my senior year of college in New York, and I was completely and utterly broke. I had been doing freelance work to keep me afloat, but things started to go downhill in December, when I only made $600 for the entire month — not even enough to cover my rent. On a cold night I huddled in the school’s library, answered every student job posting I could find and scanned Craigslist. Five minutes after answering the nightclub post, I received a response from a guy named Bob. He wanted me to call him. I ducked outside and dialed the number he sent me.

Bob told me the job was actually for private lap dancing parties; he liked my photos and thought I was a perfect candidate. After explaining that the gig entailed giving private patrons lap dances for $20/song, he reassured me, saying, “You’ll never have to do something you feel uncomfortable with.” Upon learning that most girls went home with $800–$1000 a night, I decided to dismiss my apprehension and try it out. I had a $75 graduate school application fee to pay and didn’t know where that money would come from.

At 6 p.m. sharp the following Thursday night, I showed up to the address he texted me earlier that day. It was a nondescript black door on a nice street in New York’s Flatiron district; a large man dressed head-to-toe in black with an earpiece signaled that it was the right place. I opened the door and saw a coat-check area, which led to a huge nightclub-like room with a bar. Women milled about in nothing but thongs, bras, and stilettos. I asked one for Bob, and she pointed me to a man with a brown ponytail. He said that he was happy I showed up and introduced me to a few girls who’d show me the ropes. I changed into my uniform — consisting of a bra, tiny underwear, and the nicest heels I had — and applied heavy eye makeup and red lipstick.

After getting home at 5 a.m., I scrubbed myself raw in the shower and fell asleep. I woke up at noon and thought that it was all a dream. That my sore legs and headache were just figments of my imagination. When I looked in my purse and found $600 wadded up, I knew that it had all been real, incredibly so. 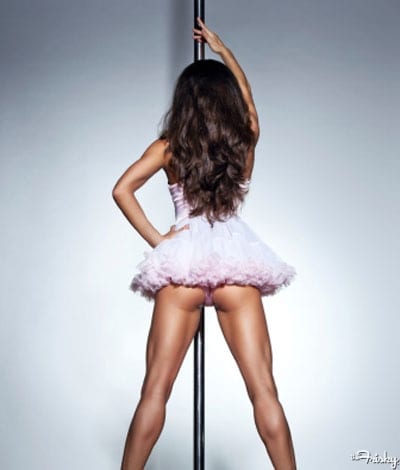 The club I worked for was essentially a secret lap dance party that changed locations each week. Guests had to be referred to a selective email list, and most of them were powerful Wall Street types, lawyers, doctors, or real estate moguls.

I began working there two nights a week and quickly learned the tricks of the trade. The money felt like a godsend and I had enough spare time to work on school-related things. I mastered the art of chatting up potential customers in the lounge area on how to convince them that I was worth $20 a song. I spoke about how I was a struggling student, how my parents refused to help me out, etc. I learned that heavy doses of alcohol take the edge off grinding on a stranger’s hard dick, that it’s a lot easier to let a guy squeeze your ass when you’ve just taken a painkiller with a glass of wine.

An average night, which ran from 7 p.m. to 3 a.m., would include having my ass caressed and spanked; having someone try to stick their tongue down my throat; and the expected touching of my breasts. This all happened during “legitimate” lap dances. It only took me a few weeks to become desensitized to all of it.

Certain events slowly drove me away. For example, I let one client indulge in a spanking fetish and I ended up with a huge black bruise on my ass that took three weeks to go away. There was one night where I only made $40 for some dances with a complete prick. One guy — a well known executive for a major company — tried to stick his fingers in my ass.

What propelled me to quit was actually my parents coming in town for my graduation that May; they arrived following a night of lap dancing While grabbing lunch with my mother, she noticed a bruise on my upper-thigh. I told her it was nothing, probably something that happened when I was working out. I knew that it was from the previous night—a battle wound from eight hours of grinding on men’s laps.

I told myself then and there that I wouldn’t go back. My parents’ smiles during the graduation ceremony broke my heart. If they knew what their daughter had been doing to earn money, then maybe they wouldn’t have smiled so much in all of the photos taken that weekend.

Today, I’m still in New York City and have a “normal” day job. From time to time I think about my past life, about how people around me would react if they knew. A few weeks ago I saw a former client in a popular restaurant. I was hanging out with some girlfriends; he was with some business colleagues. We both recognized each other but didn’t say anything.

After paying the bill, he purposely walked past my table and the hair on the back of my neck stood up. He turned his head and winked at me. And walked out the door.

How To Initiate A Friendship

To ‘Atlanta’ and beyond: Every word of this Zazie Beetz interview is worth reading