What did famous royals look like before their transformations? 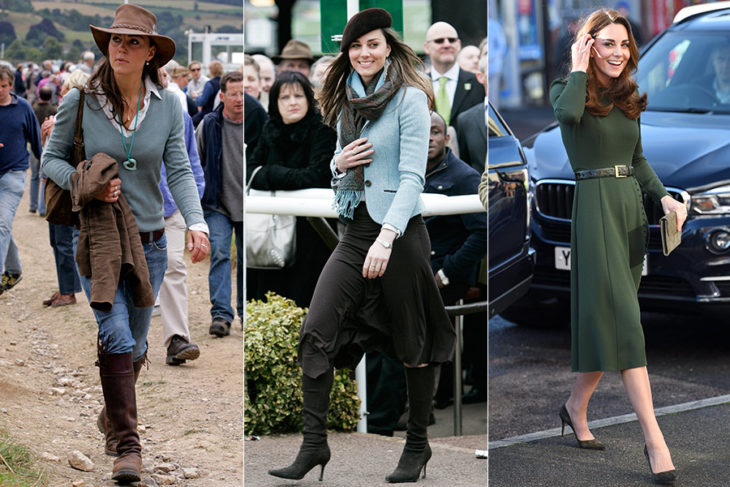 Before she married Prince William back in April of 2011, Kate was probably the most famous royal girlfriend. She and William dated since their university days. In those days, she dressed as she wanted, and wore cowboy hats and low jeans, as she did not have to worry about how smart and formal she dressed. However, when she became a member of the royal family, her style had to distinctively change, as she began wearing clothes form designers who aligned themselves with the royals long ago. Furthermore, the now Duchess also stopped working at Jigsaw, as well as at Party Pieces, the Middleton family business. 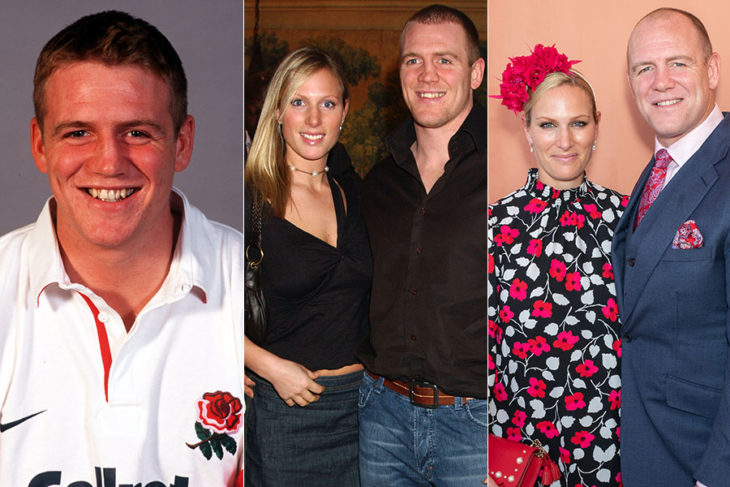 Athlete star Mike Tindall met his future wife Zara Phillips during the Rugby World Cup-winning campaign of England, which took place in Australia all the way back in 2003. Before retiring, he was known as a player of Bath Rugby and Gloucester Rugby, and captaining the national team. Seven years later, the Buckingham Palace announced the engagement, just before Christmas of 2010. This was mere weeks after Prince William and Kate had their engagement. Zara and Mike married in July 2011 in Edinburgh. Since then, they have had two daughters, Mia and Lena.

In 2008, Mike famously had his nose fixed, after breathing struggles that took place for years. During his 12-year career in rugby, he broke his nose eight times. Three years before the procedure, he said, “I don’t really want to get it fixed but it looks like I might have to because I can’t actually breathe very well. The problem is that if I get it done, will people say I’ve had it just because I’m doing TV stuff now? Because it’s definitely not.” 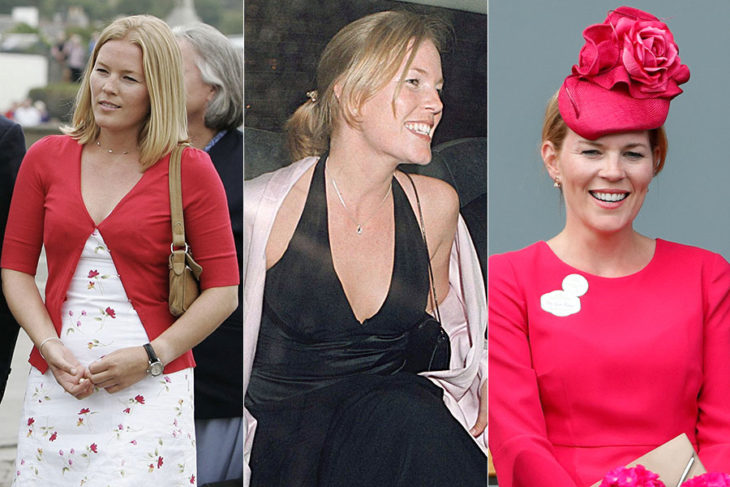 The beauty from Canadian met Peter Phillips at the 2003 Canadian Grand Prix, and she did not realize he was the Queen’s eldest grandson, until she saw him on television some weeks later. She moved to the UK after their romance became serious, where she lived in Kensington with Peter, and in a cottage on Princess Anne’s Gatcombe Park. When she moved to London, she started working as a personal assistant to Michael Parkinson, a presenter. She also began important attending royal events.

Autumn and Philipgot engaged in July 2007, and got married the following May at St George’s Chapel of Windsor Castle. They now have to two daughters, Savannah and Isla.

Sophie Rhys-Jones is married to Prince Edward, and she began her working career in public relations. She was a member of multiple agencies, including a four-yearsting at Capital Radio. She then started her own firm called RJH Public Relations, back in 1996. Her business partner is Murray Harkin. 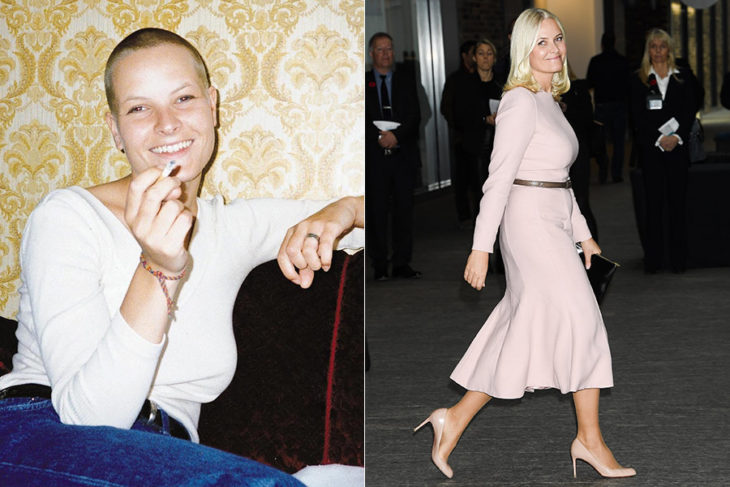 Crown Princess Mette-Marit of Norway has had one of the biggest royal transformations. As she admitted herself,shewas rebellious during her pre-royal years. She was employed at a restaurant in Oslo, and was a single mother to a son named Marius. It was at this time that she met Crown Prince Haakon during a music festival. When they became engaged, multiple royal watchers questioned his choice for a wifebecause of her past. 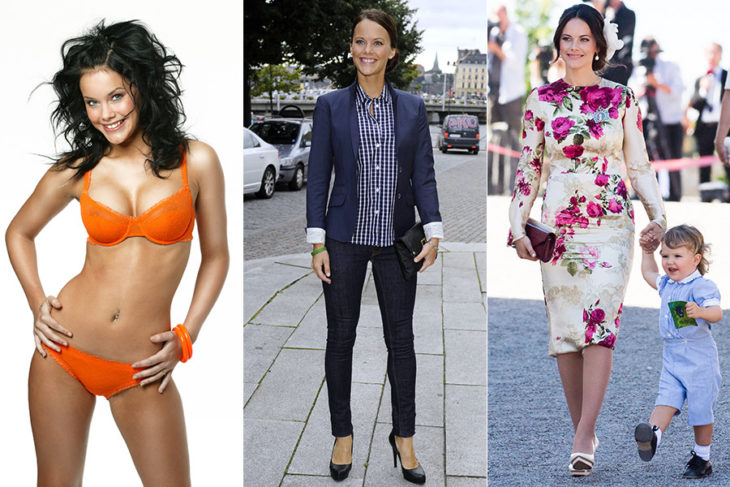 Sofia Hellqvist was also a rebel before she became royalty. She married Prince Carl Philip of Sweden, but before her marriage, the beautiful brunette was a waitress, a model, and a reality TV star. She found fame in Paradise Hotel. She is now Her Royal Highness Princess Sofia, Duchess of Värmland, and she made headlines before when she shared a kiss with the famous American adult film star Jenna Jameson, on her trip to Las Vegas.

Carl Philip and Sofia met during a lunch with mutual friends. They said it was “love at first sight”. “The first thing I noticed about Carl Philip was that he seemed very humble. When I got to know him, I saw that he was incredibly natural, very intelligent and very humble.” He said about his wife, “Above all, she’s beautiful and has beautiful eyes. But she’s also a fantastic person. She’s down to earth and has a wonderful personality. There are so many good things to say about her.” 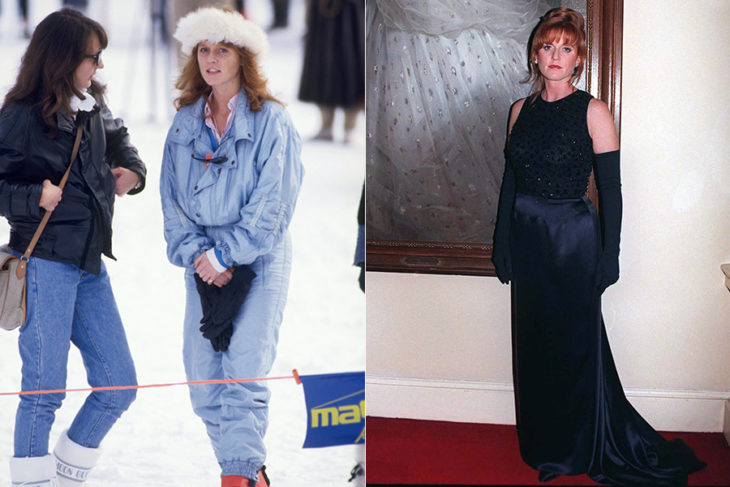 Sarah Ferguson was 25 years old when she got married to Prince Andrew. However, before her royal life started, she trained as a secretary and worked for an art gallery, two PR firms, as well as a publishing company. Despite their divorce in 1996, Sarah and Andrew are now best friends and they regularly meet up with their daughters Princesses Beatrice and Eugenie. She revealed, “A table can’t stand on three legs, really, so you have the Duke and I, and the two girls. We’re a family unit and we lead by example. We support each other emotionally, and we support each other health wise. At least every two weeks we sit down together and communicate, the four of us.” 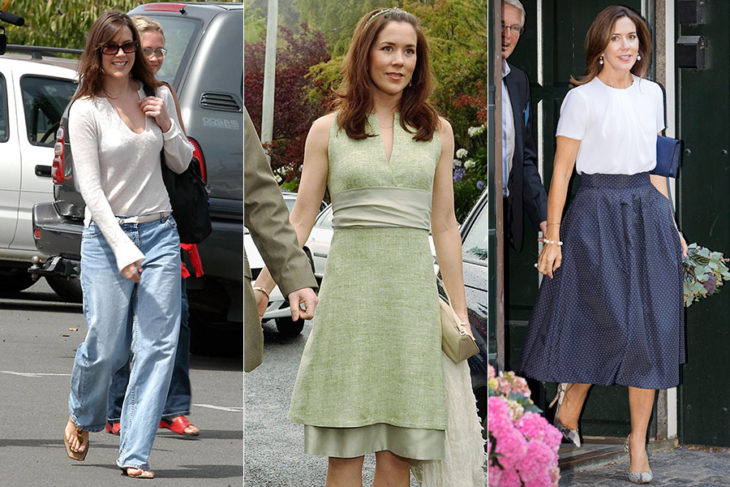 Before Mary was ever a royal, she was an accomplished executive in marketing and advertising business in her native country of Australia. Former Miss Mary Donaldson met her now-husband at the 2000 Sydney Olympic Games, while he attended the major sporting event. Mutual friends introduced them at the Slip Inn, a famous pub in the city, and they started dating. Mary did not know that Frederik was a Danish prince. Three years after, they were engaged. Now, the pair has four children together. 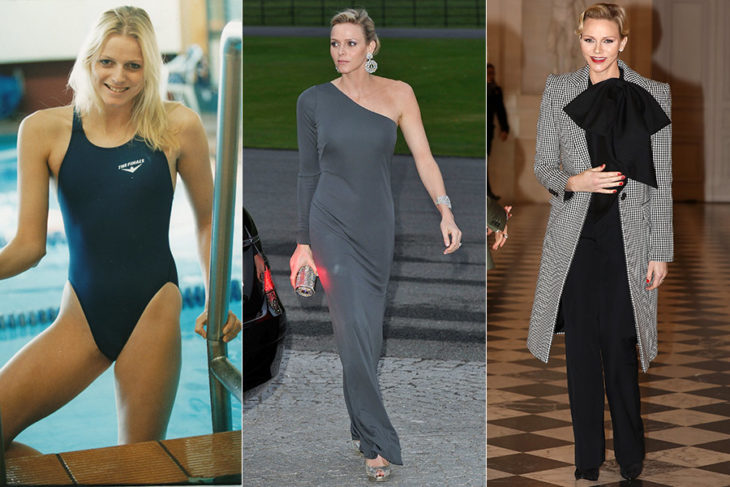 Before she married Prince Albert, Charlene was already a celebrity, as she was an Olympic swimmer. At the 2000 Sydney Olympics, she represented South Africa, and at the 1998 and 2002 Commonwealth Games, she also swam for her country. She also wished to compete at the 2008 Beijing Olympics, but she did not manage to qualify. Charlene met Prince Albert in 2000 during a swimming event in Monaco, but they only revealed their romance in 2006. They got engaged in 2010.

The Duchess of Sussex 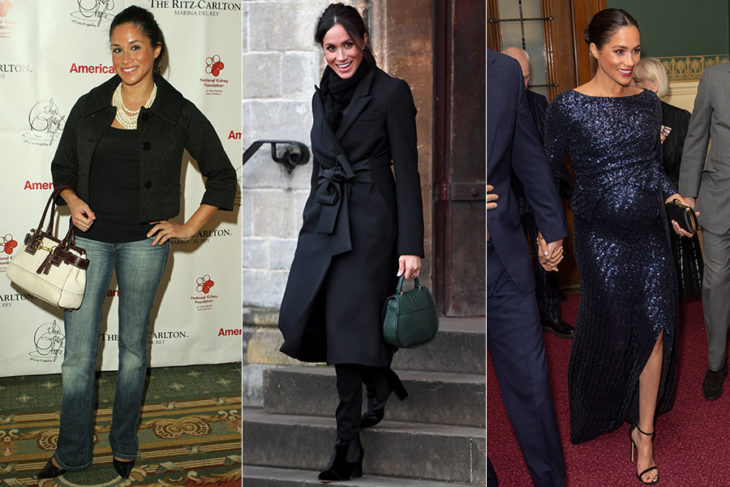 The most recent person to become a member of the royal family is Meghan Markle, who was a popular TV actress before marrying Prince Harry last May. She most famous for her role as Rachel Zane in “Suits”. The now Duchess of Sussex confirmed that she was done with acting during an engagement interview with Prince Harry. “I just see it as a change… It’s a new chapter, right? And also keep in mind I’ve been working on my show for seven years. So we were very, very fortunate to be able to have that sort of longevity on a series, and for me once we hit the 100 episode marker I thought, you know what, I have – I have ticked this box and I feel really proud of the work I have done there and now it’s time to, as you said work – work as a team with – with [Harry].” 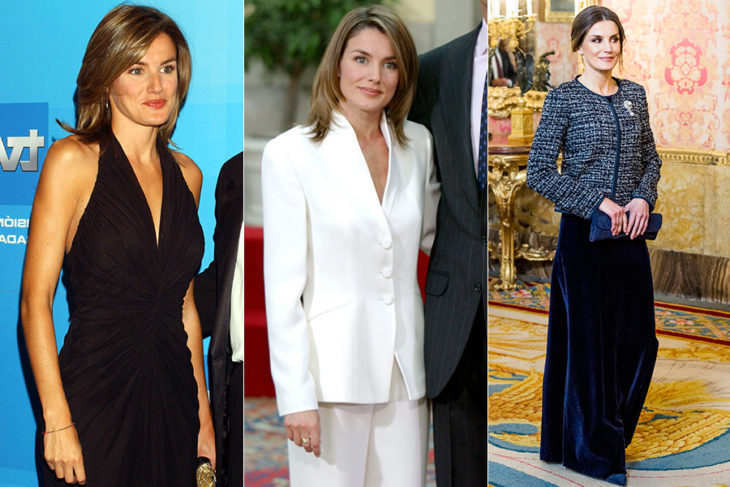 King Felipe and Queen Letizia shocked many people when they revealed their engagement back in November of 2003. When they started dating is not familiar, but she was known before this.The now Queen of Spainwas a TV anchor for InformeSemanal, TelediarioMatinal and Telediario 2. During those years, her biggest reports included a live broadcast from the 9/11 attacks, and post-war Iraq reports.

Queen Maxima of the Netherlands 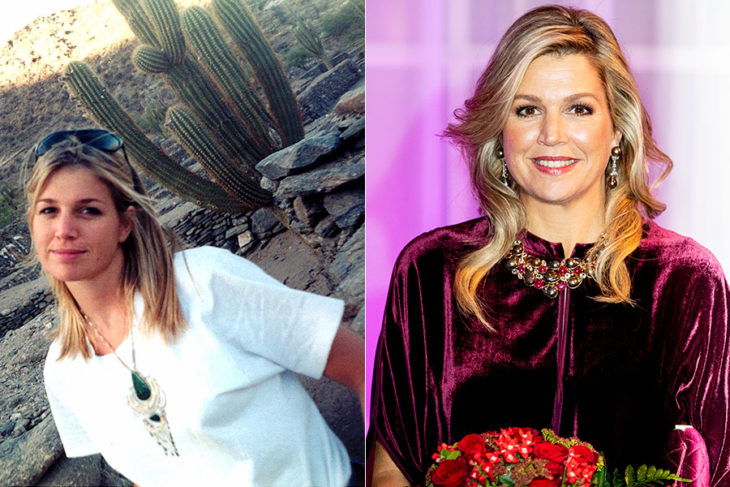 The beautifulroyal was born and raised in Buenos Aires, Argentina. She earned a degree in economics, and worked for HSBC, Deutsche Bank and Kleinwort Hambros. She met William-Alexander, her future husband and father of her 3 children,in 1999 during the Seville Spring Fair in Spain. She had no idea he wasa Prince. Their relationship and engagement were controversial, because of her late father Jorge Zorreguieta. He passed away in 2017, and was the Minister of Agriculture during the dictatorship of General Jorge Rafael Videlain Argentina. 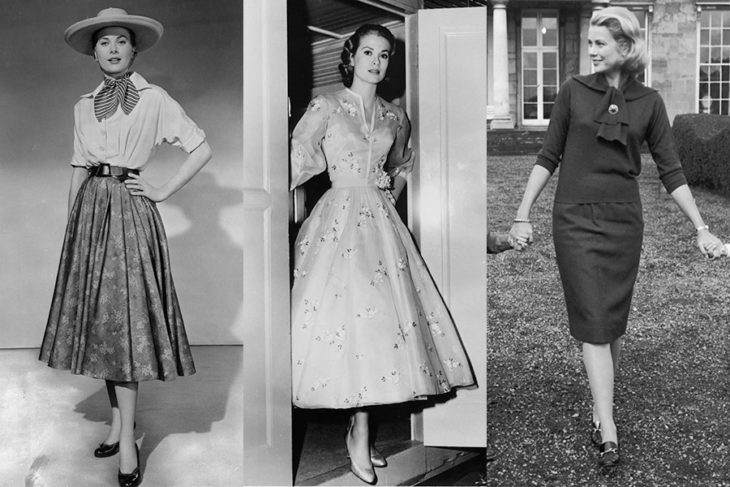 Even though she was the Princess of Monaco for the back half of her life, she is still famous as the Hollywood superstar Grace Kelly. She was already dating a French actor Jean-Pierre Aumont when she met Prince Rainier III of Monaco. Their romance blossomed and they married each other in 1956. She gave up acting at just 26, already winning a Golden Globe Award and an Academy Award nomination for “Mogambo”. She took home the Academy Award for Best Actress for “The Country Girl”. 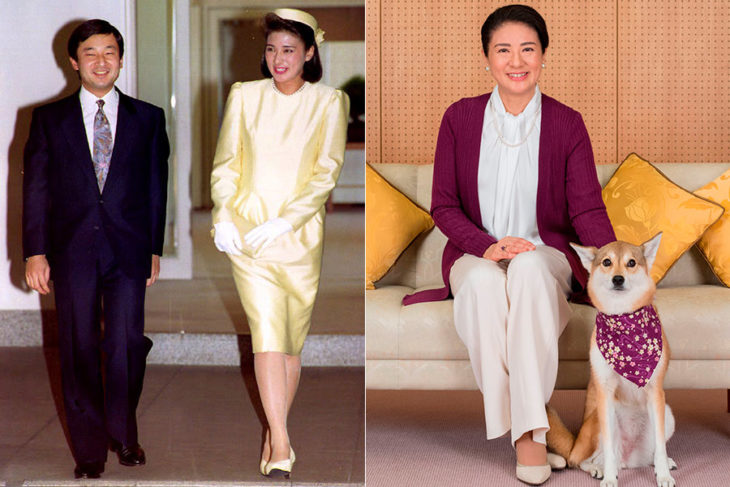 Crown Prince Naruhito of Japan initially had no luck, as Masako refused to marry him, as she did not want to give up her freedom and independence. However, she accepted his third proposal in December of 1992, and their engagement was announcedthe following month. They have one daughter, Princess Aiko. 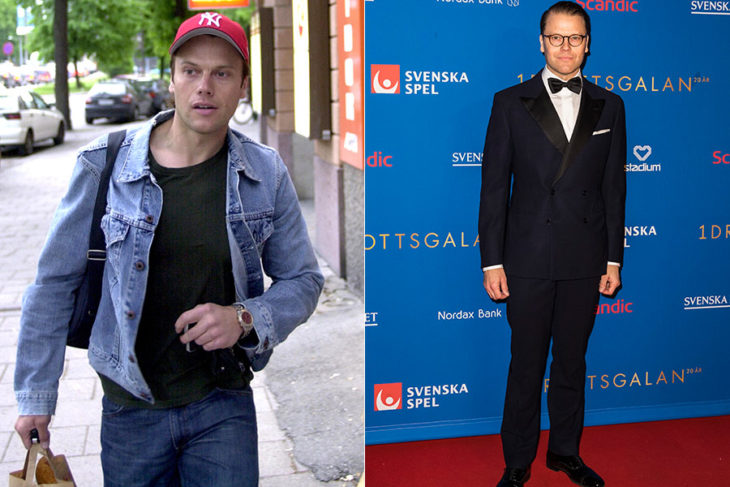 Daniel worked as the personal trainer of Crown Princess Victoria of Sweden, which is when he met his future wife. This was in 2001. Daniel had a company called Balance Training, which was made up of three gyms in Stockholm. When he became a prince in 2010, he stepped down from his position as the CEO. 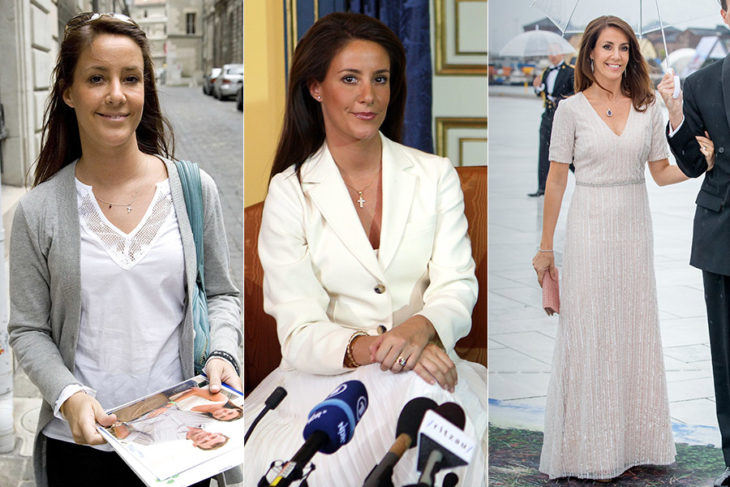 Princess Mary of Denmark like her sister-in law, Marie has an advertising background. She is from France, and she worked for several agencies, and the Reuters financial news agency Radianz in Switzerland. When she was to become a princess, she left her job. On weekends, she visited her boyfriend from Geneva to Denmark. In 2007, they became engaged. Since those years, they have had two children, Prince Henrik and Princess Athena. Marie is also a stepmom to Prince Nikolai and Prince Felix. 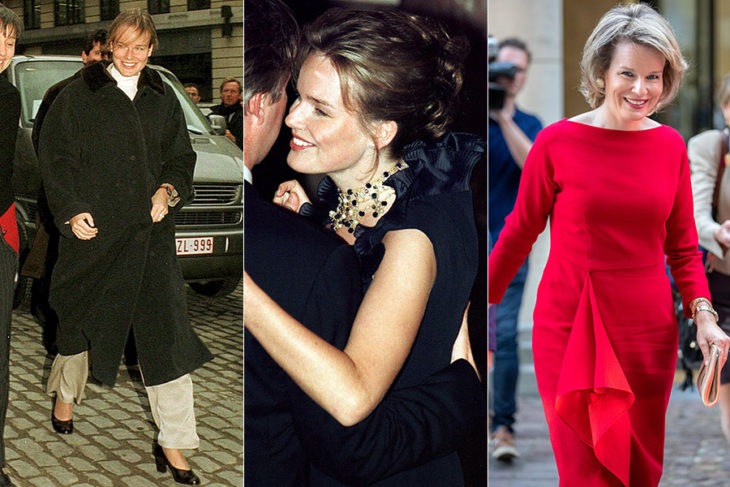 Mathilde is the eldest of five children. She is from Ukkel, Belgium, and worked as a speech therapist before she became a member of a royal family. Mathilde worked in her own private practice located in Brussels, between 1995 and 1999. In 2002, she earned a master’s degree in psychology. King Philippe of Belgium and her married in December of 1999.

Born on The Same Day! Will Famous Actor Be Royal Godfather?

Why We Need to Read the Label Before...