Would You Pay Extra For A “Child-Free” Flight?

I’ve said it a million times, but I’ll say it again: I love kids. But being stuck on a six-hour flight with a squalling toddler right behind me, killing my enjoyment of my millionth bag of peanuts and whatever crap movie is on, totally sucks. But is a screaming infant so annoying that I might pay extra for a seat on a child-free flight? Apparently, I might have the option, as some fliers are calling upon airlines to offer kid-free flights — or “family only” sections — so that their travel experience can be temper tantrum-free. This comes after a string of incidents: In July, Qantas settled a suit with a woman who alleged she suffered hearing loss after being seated next to a screaming tyke on a flight; in January, AirTran forced an entire family off of a plane after their toddler was making noise and refusing to take her seat; and in March, a woman allegedly grabbed a child — who was not hers! — because he was kicking her chair during her Southwest flight. According to an article in The New York Times, even some parents have come out in support of flights having family-only sections, because it would make the experience more pleasant for them as well. Their kids could watch TV and laugh and chatter without getting dirty looks from the guy across the aisle who finds the noise distracts him from reading SkyMall. 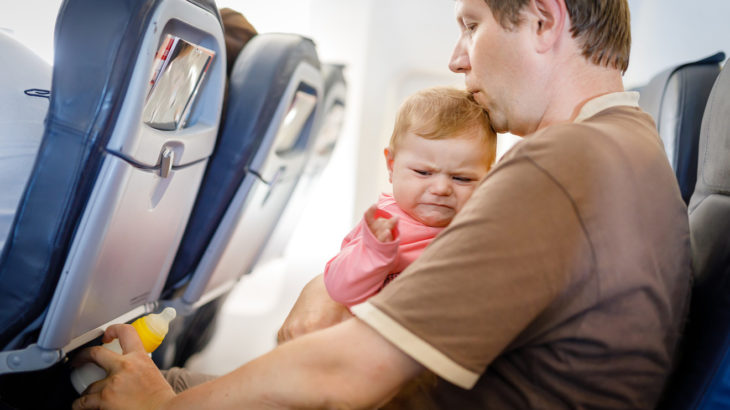 Personally, I don’t think child-free flights are the answer, though I can get behind family-friendly sections I suppose. But, ultimately, I think we need to be encouraging a more “family-friendly” culture. It’s not that I think parents should just sit there with dumb smiles on their faces while their 2-year-old hurls toys at neighboring passengers, but childless people need to remember that sometimes kids cry. And parents don’t love the wailing either and likely find the ruckus to be insanely embarrassing. I think parents who “allow” their kids to act like terrors in public places are few and far between compared to parents who are genuinely trying their best in stressful situations. Children have a right to exist and the way they exist is sometimes, well, louder than adults. Deal with it. There are worse things in this world.

Which brings me to an issue that I think needs to be prioritized by the airlines first and foremost: snoring. Snore-free flights. Get on it, airlines.

7 Beaches in Australia You Need To Visit...