Of all the personal essays I’ve written, “Why Marrying For Money Isn’t A Totally Bad Idea” has provoked the biggest response. It has actually run twice on the Frisky site: once about a year ago and again in June for our Cash & Coupling feature. Due to all that exposure, it has racked up comments numbering in the hundreds and been written about (90 percent negatively) on dozens of blogs. Someone even sent me an email calling me a “yeast infection”!

Some of the things written about the post, and about me, are so untrue that I’m not sure the author actually read the essay all the way through. But it’s clear to me — both from the tone of the comments and from seeing the piece run with “fresh eyes” for a second time — that I did not explain myself and my beliefs very well. I think that instead of being speculative, I should have gotten more personal.

I believe in planning parenthood. Anything a person can do to plan the most important of all life’s processes, I support. A close family member has had two abortions because this person was not ready to be a parent. I also know at least my eldest sister and I were unplanned for our parents. Of course, I love the family I have, but I can see both sides of how having — or not having — a child or children impacts two people’s lives forever. Forever. 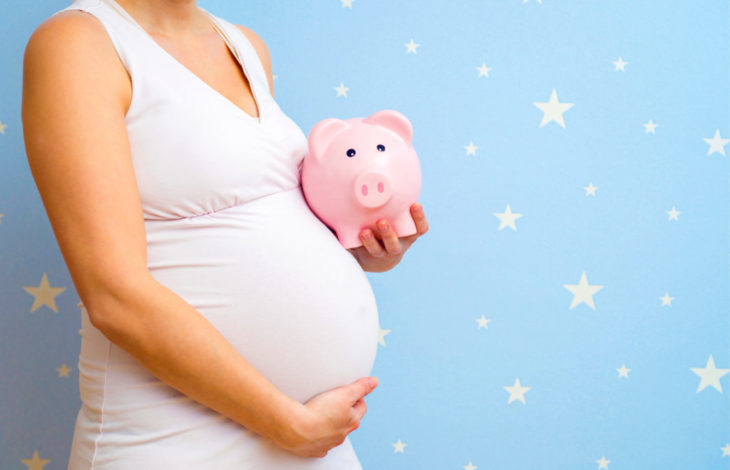 I also believe in financially planning to be a parent. Can I do it? How much will it cost? I suspect I feel this way because A) I work in journalism, one of the least lucrative professions, and B) I’ve spent the better part of the last nine years living in New York City, one of the most expensive cities in the world. I accept the fact that I can’t shop or vacation or eat out very much and I’ve learned tips and tricks on how to be thrifty. Still, I worry about money — what if I get sick? what if I’m not putting enough in my 401k? — all the time. All. The. Time.

I think worried about these topics a lot more in the past year because I’m in a committed relationship and we both feel each other is “the one.” Most of the commenters on “Why Marrying For Money Isn’t A Totally Bad Idea” seemed to think I was advocating going out and finding rich men and that I, personally, am on a gold-digging adventure. The truth is, I’m not digging. I actually moved in with my boyfriend almost a year ago and the entire time we have been dating, I’ve earned more money than him.

When I met my boyfriend, he was actually unemployed. Well, technically, he wasn’t “unemployed,” but he was earning no income whatsoever. Yup, you read that right: zero income. He had left a well-paying job as a computer programmer several months earlier and was living off savings, and then a loan from his parents, while he started to launch a technology start-up.

Some girls might have run screaming in the other direction from a technically unemployed guy pulling in no income, but I didn’t. An ex-boyfriend had launched an enormously successful tech start-up while we were dating, so I had faith it was a legit career move. But more importantly, I loved his gumption. A few years ago, I quit a full-time job that I hated — but which had benefits, dental, 401k — to freelance full-time on stuff that I wanted to write about. It was an insane move for a 24-year-old to do. My parents were not gung-ho on the idea. But I believed in myself and I made it work (until I was hired on staff at The Frisky, in fact!). Seeing how David followed his dream reminded me how a few years earlier I had been in the same place. His confidence in himself and willingness to take risks were really attractive to me. 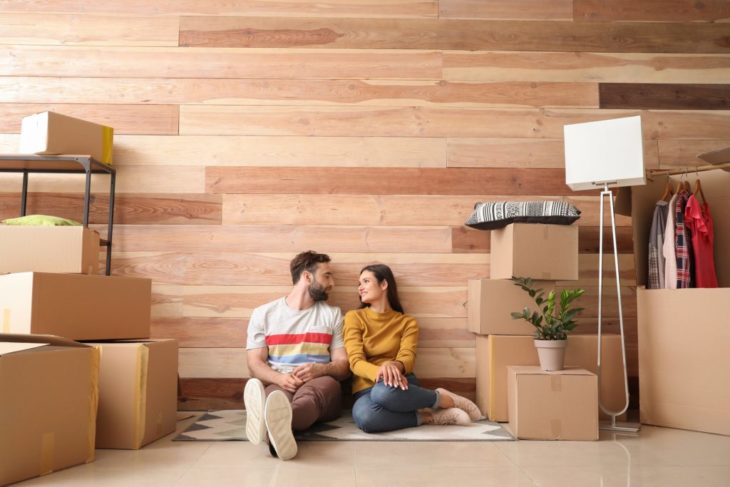 For the first maybe eight months that we were dating, he lived very frugally off that loan from his mom and dad. When we moved in together, we purposefully moved to a crappy (trust me) apartment in New Jersey where we each pay only $300 in rent. Eventually, funding for his start-up came through and he was able to set his own salary. It was a happy day indeed! But not really, because the start-up had a finite amount of financing and obviously he had to extend it for as long as he could. He set a salary for himself: $12K less than I earn as a writer. Ideally, he’ll receive more funding, become profitable, and he’ll be able to set himself a higher salary more commensurate with what any other computer programmer earns.

But that may not happen. If his start-up folds — entirely possible in this economic climate — both of us understand the income he contributes to our relationship would go back to zero. With his nerd-tastic computer programming skills, he could probably find a new job relatively easily, but that’s not a given. But we’ve discussed the topic at length and, as a couple, we both understand what it means: If his start-up folds, I could be supporting both of us for at least a little bit. We’d have to live very frugally (hence, why we chose an apartment with only $300 each in rent), but we could do it. Our relationship and our commitment to each other is so strong that we’d make it work whatever way we have to. Furthermore, the way we see it, if I support him emotionally (and possibly financially) now, he will support me emotionally (and possibly financially) when I write a book later on in life.

But the reality is, I wouldn’t bring a baby into this situation. Babies are damn expensive (I say this as an aunt of four). Forty percent of David’s and my combined income could easily drop out at any moment; but even if our combined income stays static, it’s still not enough for how I want to raise a child. I know people from low-income and poor families make do, but it is our choice for how we want our child raised. Ideally, I want us to not live in a crappy apartment. Ideally, I want us both to have health insurance — both for prenatal care and for the child’s own health care. Ideally, I want to take my baby to swim classes and music classes and expose his or her little brain to all kinds of things. Ideally, I want to stay at home for the first few years, which could not be done right now without going on government assistance. Other writers have written much more eloquently on the subject, but the reality is, it can be difficult to find good-quality childcare. (Example: I had an internship in college where part of my responsibilities was to watch the boss’s baby girl, who he brought into the office instead of leaving with a sitter.) That’s why I am strict with myself about planning our parenthood — not only biologically (hello, birth control!), but financially. 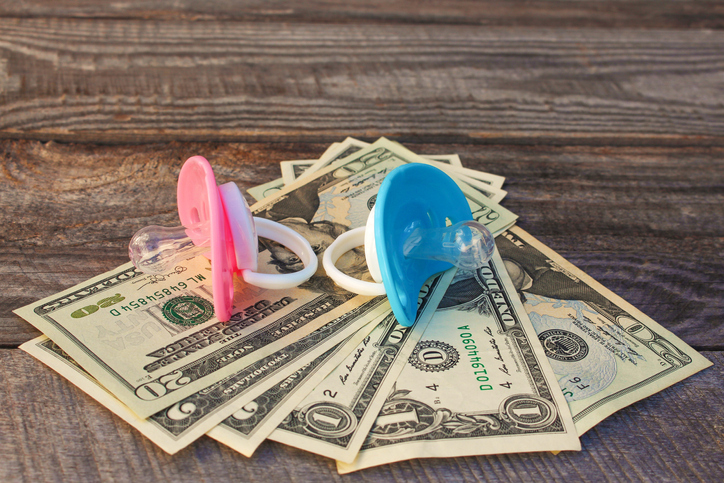 For all our dreams to be realized, when my boyfriend and I decide to have children (hopefully within the next five years, because I’m seriously going to kidnap somebody else’s baby if it doesn’t happen soon-ish) one or both of us needs to earn a higher income. Like being an actress or a musician, writing doesn’t pay very lucratively and it never, ever will. (To the commenters who suggested that I go into a better-paying field, do you really think that I’d get a well-paying job in, say, finance when there’s nothing but writing and editing jobs on my resume?) The reality is, because he is a computer programmer with a valuable skill set, he will be the one raking in more dough. In this way, both me and my future child/ren will financially depend on him for that contribution to our family. Yet I don’t think that depending on someone who makes a higher income to provide the majority of financial support is “wrong” or “unfeminist” or “unfair” or any of those other negative words. It’s just reality. And from a gender angle: no one, least of all me, is saying that in a heterosexual relationship it is the man’s job to be the breadwinner. But in our relationship, these are the facts; this is what makes the most sense for us and this is what we are in agreement on.

If I have to do so, I’ll support him now. When we have an expensive, money-sucking baby and I stay at home, he will support us. Given the field he works in, it’s almost certain he’ll be able to do that. I don’t really understand why saying I want my future husband to provide the financial support to me and our kids (especially when they are young) is so controversial. Planning parenthood is just responsible. As far as I’m concerned, the only controversial part of it was that I said it out loud. But why is being honest about one’s finances and one’s goals — so long as they are mutually decided upon, as ours are — so precious that we can’t talk about it? I’m afraid that the “gold-digger” stereotype is just getting thrown around. To be sure, gold-diggers exist (Anna Nicole Smith, etc.) but “gold-digger,” “meal ticket” and “marrying up” are also used as a sexist slur when we don’t like something a woman is saying.

I’m not really sure what has happened with feminism — or not happened, as the case may be — that makes some ideas so sacrosanct and so precious we can’t discuss them. I thought feminism was about women and men choosing what we want for our own lives, our own relationships and our own families. I don’t expect everyone to agree with my and my boyfriend’s choice to financially plan for our future family. But maybe in a few years, when we’re proud parents, I won’t care anymore.

The Dos And Don’ts Of A First Date

Girl Talk: My Hot And Cold Relationship With OKCupid

How To Dress Your Baby For Summer?

6 Things To Consider Before Buying An Above...