With everything looking so grim in the real world right now, disappearing into a TV world can be a much needed escape from it all. Sure, we’ve got to fight the powers that be… But, hey, everyone needs to disengage from the news, kick-back with some wine (or beer or whiskey or… Everclear, no judgement), and take a few hours to recharge sometimes—and what better way is there to do that than with a show centered on certifiably badass women?  If you’re in the market for a new show to binge that will also make you feel proud to be a strong lady, here are some ideas that aren’t Buffy the Vampire Slayer or Gilmore Girls!

Despite being wildly popular in critical circles, Veronica Mars never quite achieved the ratings it needed to stay on the air. For those of you who are unfamiliar with the show (or who are just familiar with the name), Veronica Mars is a neo-noir, mystery show that follows a teenaged, private investigator in the ultra-rich seaside town of Neptune, California.

Besides being seriously witty and indulging in most of your favorite “high school drama” tropes, Veronica Mars also deals with some very serious cultural and social issues—sexual assault, classism, racism, you name it — with grace and sensitivity. Oh, and Kristen Bell’s Veronica is what you wish you were in high school, Jason Dohring’s Logan Echolls is the douche-y rich kid you loved to hate, and (no spoilers, but) a very young Max Greenfield makes a few appearances looking adorable as ever. With only three seasons, Veronica Mars is a perfect choice for a fairly quick, but super empowering, binge-session.

Warning: You may look into getting a PI license when you finish watching.

2. Parks and Recreation (Netflix, Hulu, or pay to watch on Amazon)

There is nothing I object to less than powerful depictions of awesome ladies and Parks and Recreation is chockfull of ‘em. Although Parks and Rec is often cited as one of the best sitcoms in recent years (pour one out for NBC’s 2009-2013 comedy line-up), the incredibly female-centered nature of the show is oft-overlooked, or at least not fully appreciated. When discussing the “female power” of Parks the focus has traditionally been on Leslie Knope. It’s not without reason, she’s a civil servant, self-proclaimed feminist, and all around hilarious, but she’s not the only iconic woman on the show. 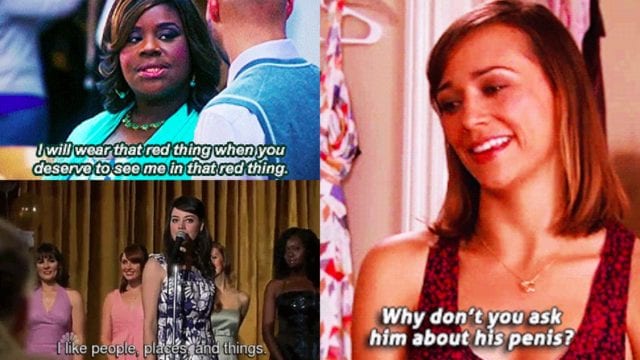 In fact, every single female character on Parks and Rec is subversive, empowered, and amazing in their own right. Donna, April, and Ann each embody their own version of self-assured womanhood and show the true diversity of what feminism looks like. No, feminists aren’t all Leslie Knopes! Sometimes they’re Donnas or Aprils or Anns, and that’s what makes the world so great—and what makes Parks and Recreation a great binge-watching option when you want to feel like women can do anything.

Orphan Black stars one incredibly badass lady (Tatiana Maslany) as at least ten (but maybe more) even more badass ladies. It’s a little bit “sci-fi,” a little bit “mystery,” a little bit “thriller,” and a completely and totally awesome escape. While the subject matter of the show isn’t focused on women’s issues, it’s impossible to ignore the care put into crafting all the clones—a testament to just how many ways there are to be a woman, or even more broadly, a human being in the world. Orphan Black skips the romantic pitfalls that many female-centered shows fall into and keeps it action packed and as focused on the situation at hand as possible… Without completely omitting female sexuality. The fifth and final season airs this year, so get on it!

Never in a million years did I think that I would ever write the words “the CW’s Crazy Ex-Girlfriend is one of the most feminist series on television,” but here we are. Then again, I’ve said a lot of things this year that I never thought I would (“Let’s please punch more neo-nazis in the face” and “President Trump” leap to mind), so I don’t know why I’m surprised. Either way, Crazy Ex-Girlfriend’s Rachel Bloom uses each episode to take aim at Hollywood’s toxic view of women… But like, in a funny way.

And a musical way. Bloom, the multi-talented mastermind behind the series, packs each hour of screen time to the teeth with pointed cultural critiques set to catchy tunes. Seriously, you will be singing these songs and working to smash the patriarchy all day long.

Okay, if you’re not watching Broad City already then tell me—what the hell are you doing? Although it’s been considered a bit niche, I have yet to meet anyone who watched an episode of Broad City and couldn’t find something to like. Abbi and Ilana are all of us. Even if you don’t live in New York City, don’t smoke weed all day, and don’t find yourself in surreal situations on a regular basis, something about their portrayal of 20-something life is just… Relatable. The writing can go from whip-smart to downright stupid in no time at all, but you can’t help but laugh at Abbi and Ilana’s willingness to “go there” in the name of a laugh, no matter how high or low-brow it may be. I mean, there’s a reason that “Abbi or Ilana?” has become the “Carrie, Miranda, Samantha, or Charlotte?” for the millennial generation.

The dark horse of the list, Younger, is a totally awesome (and hilarious) ride. When I first heard that the creator of Sex and the City was creating a new show for TV Land, I was skeptical, but it only took one episode for me to realize that I shouldn’t judge so quickly. Younger follows Liza Miller (Sutton Foster), a 40-something-mom who pretends to be a 20-something to get a job in publishing. It’s an outrageous premise, but it totally holds up. Not to mention that Liza’s real age/fake age conundrum opens the door for some pretty unprecedented intergenerational female bonding and empowerment. Usually women centered stories focus on women of the same age, but Younger’s bizarre set-up allows the narratives to focus not only on what it means to be a young woman (as most of the other shows on the list tend to), but what has and hasn’t changed about “womanhood” over time.

Additionally, it comes from the same brain that brought us Carrie and the rest of the SATC girls, so you know it’s witty and daring in its writing. Oh, and Hilary Duff has made her return to the small screen in this series. Seriously, I couldn’t have dreamed up a better combination of things if I tried.

While it’s not a great binge watch option to escape from the news for a while, Full Frontal with Samantha Bee is the absolute best option for a female perspective on that news. She’s literally the only woman in late-night comedy and she absolutely killed it this election season. Seriously, if you want commentary on the news that will make you laugh more than cry (I’m not going to say that you won’t cry at all, because… Come on) then check out Samantha Bee on TBS or just watch the numerous clips she posts on Facebook. She’s outspoken and amazing. It will make you feel marginally better.