6 Villages to Explore the Medieval Heart of France

Romance, believe it or not, originates from medieval times. It is the legacy of french troubadours and chivalry. Paris might be the City of Love, but it’s medieval patina is hard to notice as Paris is varnished in art deco and classical style. But there lays much beyond the walls of Paris for those that want to experience a different France.

Castles, half-timbered houses, cobbled streets, Renaissance homes, France is full of villages built in the Middle Ages. Having withstood time and stayed almost intact to this day, they have an air of being encapsulated in time, a romantic sense of isolation couples need every so now and often.

Villages are also often perched in the heart of wild nature, which only enforces the enchanted atmosphere of an insular romantic getaway. Especially if you’re planning your honeymoon, this is a perfect way of going off the beaten track in pursuit of an original, romantic and adventurous escapade a deux.

For a touch of ceremonial luxury, consider spending the night in the splendor of some of the many villas across France on your way. You can see here for more info and find locations that best suit your itinerary. 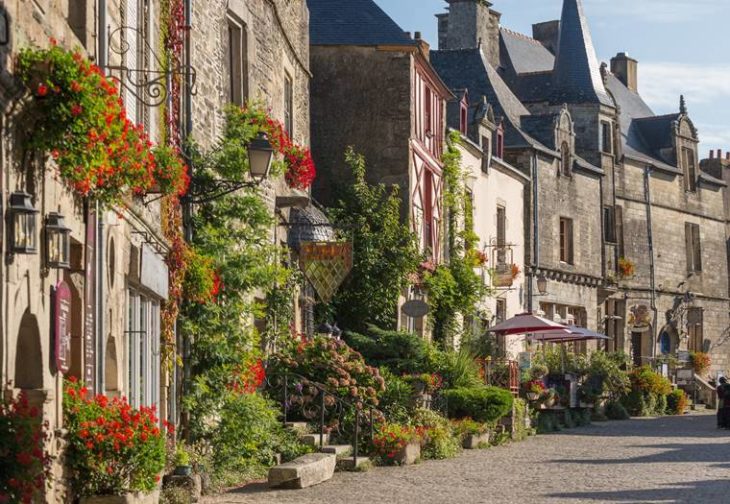 Rochefort-sur-Terre is a small Breton village of great architectural diversity. Perched on a schistous spur of the valley of Gueuzon, it is brimming with half-timbered houses, Gothic buildings, Renaissance homes, classic hotels, nineteenth-century architecture. All beautifully maintained and flowery. Rochefort-en-Terre owes much of its present face to the American painter Alfred Klots. Lovers of the village, he bought the ruins of the castle in the early twentieth century and invested his fortune. He impelled many tourist activities and was at the origin of the first flower window contest, in 1911. 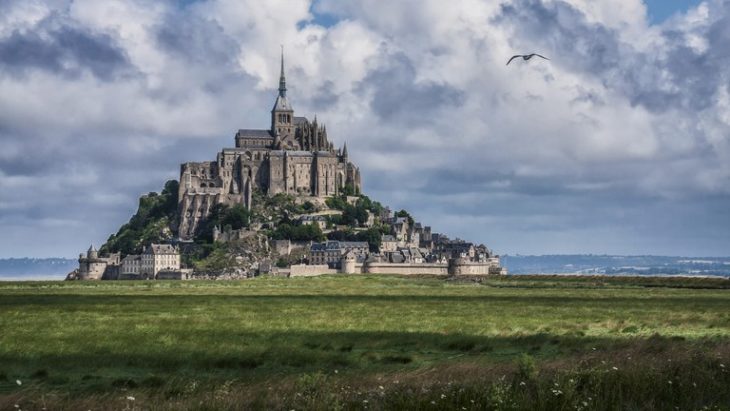 Listed as World Heritage by UNESCO in 1979, Mont Saint-Michel rises like a mirage in the heart of its gigantic bay. Its village lays since the Middle Ages at the foot of the abbey, on the south-east flank of the rock. It has always been a destination welcoming of travelers and pilgrims, and today it still 2.5 million people visit each year.

3. The village of Eguisheim, Provence 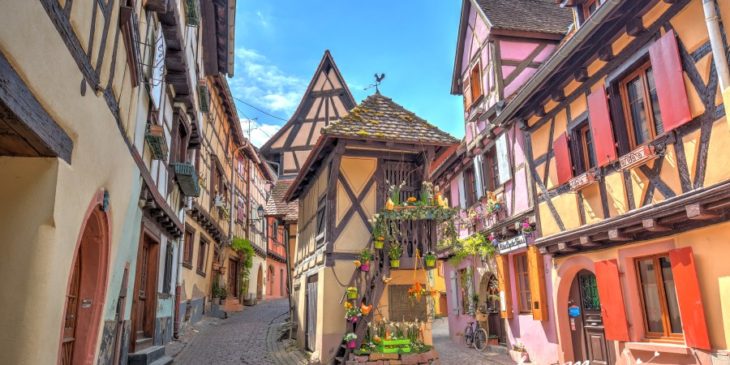 Located in the heart of the Alsace vineyards, on the foothills of the Vosges mountains, Eguisheim is a real postcard landscape. The colorful facades of its half-timbered Renaissance houses, its cobblestone and flowery streets wrapped in concentric circles around its historic heart, it is impossible not to fall in love with this jewel of the Wine Route. 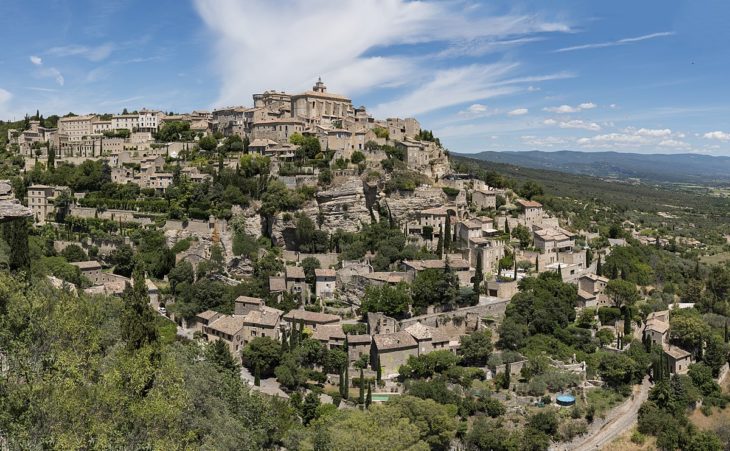 Perched on the southern flank of the Vaucluse mountains, Gordes is a village with an irresistible charm that rises to almost four hundred meters altitude. It is distinguished by its sloping cobbled streets called calades. Bordered by high buildings of dry stone, they form a true labyrinth in which one gets lost with delight. The best time to go is during the lavender season when fields are in bloom and the surroundings of the village are dressed in mauve. 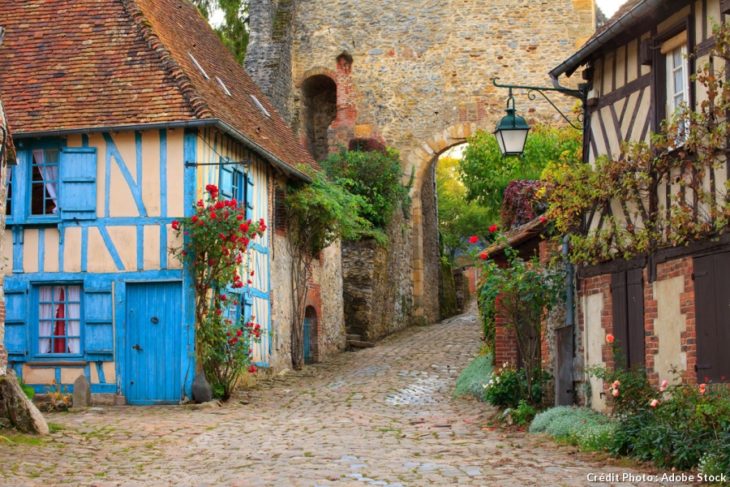 Tout ce qui est petit est mignon? There’s a French proverb saying that everything small is also cute. With less than 100 inhabitants, Gerberoy, who claims his title as the smallest city in France, justifies the popular saying. Located at the top of a hillock, this tiny city seems straight out of a period movie. Paved streets, timber-framed houses and colorful half-timbering, pink bricks, gray graphite slates, along with its many flowered facades earned it the nickname “City of Roses”. 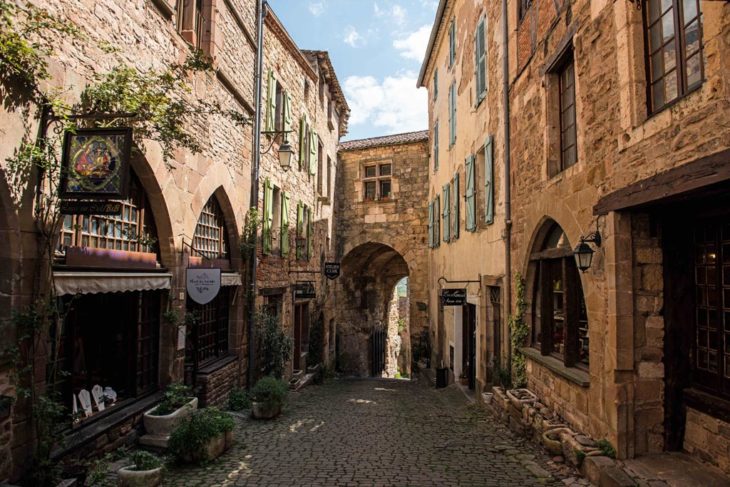 With its fortified gates, ramparts, carved Gothic facades, Cordes-sur-ciel immediately announces its medieval colors. This city founded in the 13th century has preserved the luxurious residences of its splendor of yesteryear. On the rich pink sandstone facades that follow each other along the steep streets, many fantastic sculptures come alive: dragons, monsters and grimacing figures.

This is just a small portion out of many of the medieval remains across France, and whichever you choose, you are sure to have an original experience. Within numerable abbeys, castles, and gardens, France harbors the fantasy of medieval imagination.

Especially if the chosen accommodation is this spirit, your trip will be worth every memory. One of the villa selections in France is available at Oliver’s Travels site, on which you can find more interesting tips and tricks about holidays in France.

How To Get Over Restless Life Syndrome

‘Glop’ is the Goop parody book we all needed