Last weekend, I went skiing for the first time in over 10 years. To say I was nervous and excited would be an understatement; in the days leading up to my trip, I couldn’t help but worry about breaking a limb or, I don’t know, being crushed by an avalanche.

Thankfully, the friends who came along with me were much more experienced than I (like, pro level) and promised I’d be in good hands. Their teaching method? Throwing me in the trenches headfirst. They taught me how to stop and start using my skis, and that was about it – off to the chairlift we went. No ski school, no detailed lessons. Had I thought about what was happening I probably would have objected, but I blindly went along until I realized halfway up the lift that this was not the normal path for a beginner. But this was how they had learned, they explained, that putting yourself in the thick of it was the fastest way to get off the ground, and that they’d be nearby there the whole time. (By the way, PSA time, I am not saying you lovely readers should learn this way — it’s pretty risky!)

Upon having this realization, I justifiably freaked. But by that point, I was at the top of the mountain. I had no choice but to give it a shot and trust that my friends would teach me along the way. It was really scary, but I learned more each run, and by the end of the day, I could sort of ski! At least, I could a whole lot better than I could before! Pretty quickly, the experience was put into practice all kinds of life lessons that I aimed to live by but rarely had to face in such an upfront way. I didn’t end the day a pro skier, of course, but I did possess a renewed sense of how to tackle the many tribulations looming in my everyday life. I was pushed to my limits, in the best of ways, and here’s what I found out:

1. The only way out is through. When I was at the top of the mountain, staring down at the distant lodge that seemed miles below me, I wanted nothing more than to be back on solid ground. The only way to get there, though, was to ski down the scary hill. No other way out. Kicking and screaming wouldn’t solve the problem. Facing my fears would. 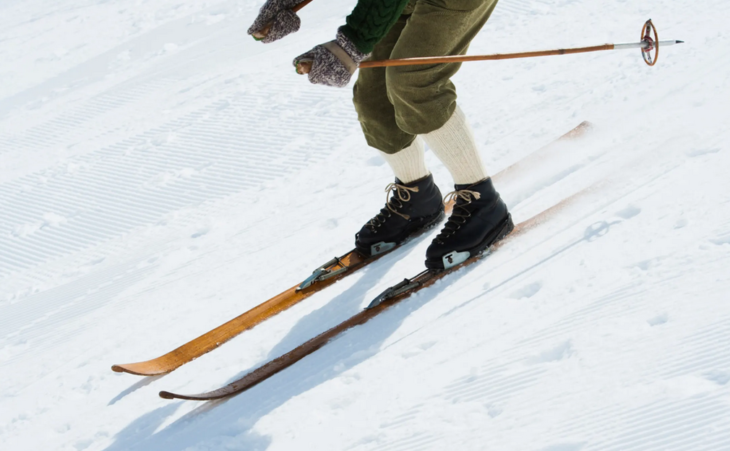 2. If the people in your life are trustworthy, trust them. At times, especially on that first run, more experienced skiers had to literally hold my hand and guide me down the slope. They had to reassure me over and over that no, they would not let go and send me flying. They never did, and the more faith I gave them, the more I was able to let go and actually focus on learning.

3. Leaving your comfort zone is the only way to grow. I spout this one all the time and I like to think that I live by it for the most part. But when I found myself headed up the mountain to attempt my second run, so much of my being was rejecting the whole idea. A part of me really wanted to quit right there, but another part of me knew that being forced to face this major fear was the only way my horizons would expand.  If something is particularly terrifying to you (that isn’t life-threatening, like jumping out your third-story window just for shits and giggles), it’s probably a sign that you should try it. The things that scare us the most have the greatest potential for leading us to new discoveries and making life richer. New things are rarely fun at the beginning, but the pay off is (usually) worth it in the end.

4. You can handle more than you think. My first run took about a million years and I fell more times than I can count. But at the end, I was able to look up at that big, imposing mountain and see that I had made it all the way down from the top somehow. I hardly felt like I was making any progress as I made my way down, but all of a sudden I looked up and saw that I’d moved forward by leaps and bounds. Proving that I was capable of something that I had doubted about myself made me really proud.

5. Feeling out-of-control sometimes is normal. I was taught that when you find yourself skiing down a hill too quickly, the way to maintain control is by turning 180 degrees to slow yourself down. When you start to turn, you’re initially going faster before you start to lose speed. This petrified me. Every time I felt out of control, the idea of temporarily losing even more control in order to eventually succeed seemed insane. For a while, I opted to intentionally crash every time I felt like I was going too fast, rather than take the risk of turning. As much as those turns felt scary and uncomfortable, it was the surefire way to eventually get down the hill, even if there were some hiccups. Refusing to turn definitely got me nowhere, repeatedly. This is so true in real life — if we can’t take a risk and face the temporary feeling that everything’s falling apart, we’ll never get anywhere. 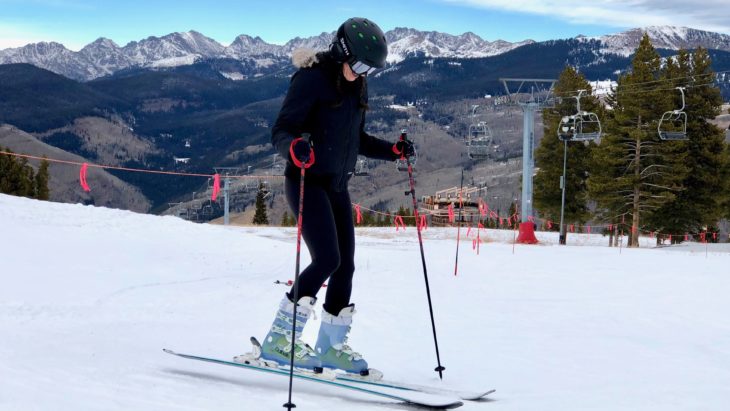 6. You can never stop or go backwards. You have to keep moving forward — even if it’s slowly. When I felt out of control on a steep hill, I was told to try to move across the mountain rather than down it so that I could travel more slowly. The one thing I couldn’t do was simply stop, because all that would do is cause me to fall over and potentially hurt other skiers. You can’t go backwards or quit when things feel crazy, but you can always slow down.

7. Willingness to make a goof of yourself in good company is an awesome way to make friends. Being vulnerable in front of so many acquaintances in my ski group, and sometimes looking like a huge idiot in front of them, made me feel so much closer to them by the end of the day. After all, they’d seen me on the slope with my skis parked in a straddle and my butt stuck up in the air for a solid two minutes, and were able to laugh with me about it. If that doesn’t scream friendship, I don’t know what does!

8. It’s all worth it in the end — like, say, when you see the view from the chairlift. Does anything get more beautiful than that?

The Breakup Diaries: Let’s Hear It For The Boys!

Things To Pack For a Winter RV Camping...