A Picture Story: My Leftover Lingerie

I have this weird thing about lingerie. As soon as I decide to wear something sexy for a guy I’m seeing, I find myself both mentally unwilling and physically unable to re-wear that schoolgirl uniform, teddy, or what have you, for anyone else. For starters, I feel like it’s a form of sloppy seconds, a regifting that may or may not involve someone else’s leftover bodily fluids. I also feel like each piece of lingerie holds special memories with the lucky guy who got to see it, and I don’t need those thoughts rushing back when I’m about to get it on with someone else. 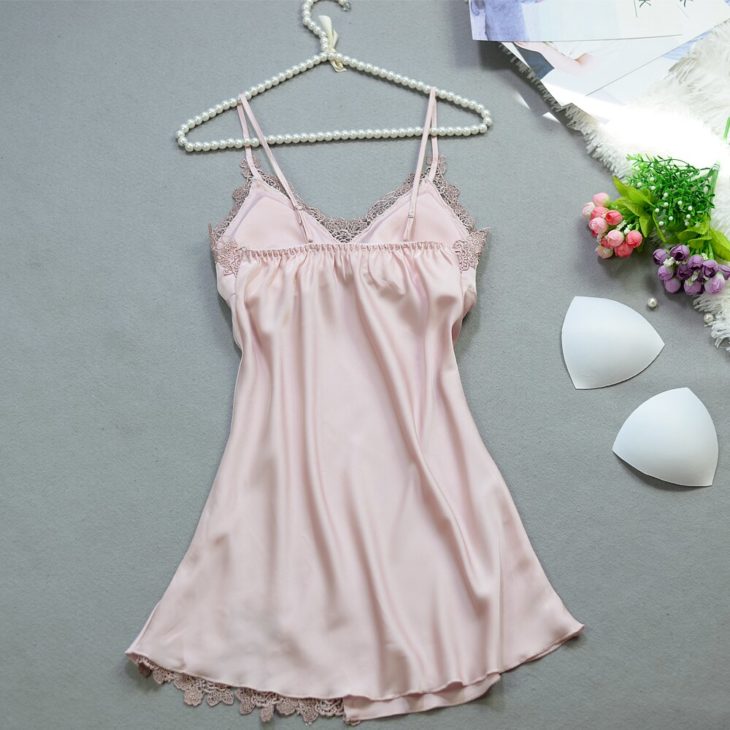 Who I Wore It For: Believe it or not, I wore this to a lingerie party at the Playboy Mansion.

Notes: Somehow, I found myself invited to a week’s worth of exclusive parties at Hef’s house, complete with celebs, models and athletes. I rocked this little pink number with a matching g-string for the outdoor lingerie party. That night, I made out with two NFL players in the grotto (a Miami Dolphin and an Arizona Cardinal) and a Canadian real estate mogul named Andrew. Sure, you could see my ass, but I was wayyyy more covered up than most of the other women there … and guys actually LOVED that. In fact, a different, more polite Cardinal asked me out on a date and offered to fly me to AZ for the weekend. I politely declined. 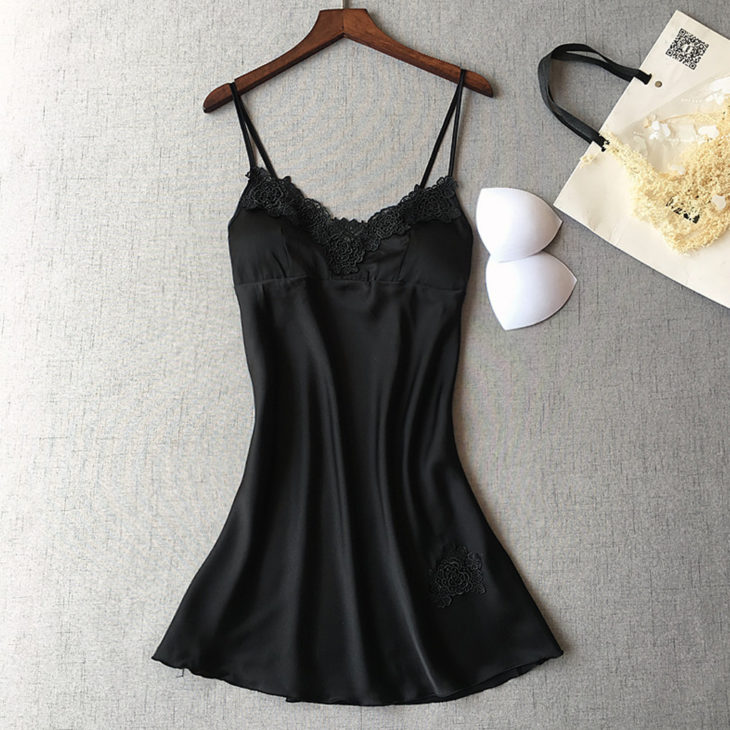 Who I Wore It For:My high school boyfriend, Chris

Notes:I wanted to wear something sexy for the first (secret) overnight with my boyfriend, but my mom had been watching me like a hawk, knowing we were doing the deed and looking for an opportunity to talk to me about it. I couldn’t come home with a Victoria’s Secret bag or she’d pounce, so I quickly grabbed this at Kohl’s when she was in the dressing room, bought it, and hoped the see-through boob part would be hot enough. Before I put this on, we role played doctor/patient and I ended up bleeding (for real) from an accidental butt-penetration incident. I wore this to bed and was in pain for three days. 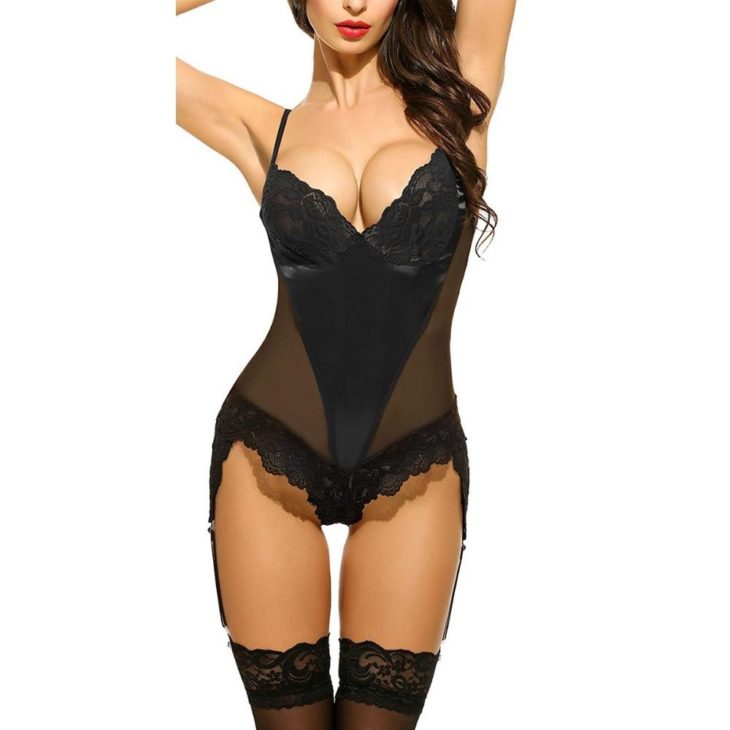 Who I Wore It For: Intended for Steve, a guy I dated for 2 months until he ghosted me

Notes:I bought this sexy bitch in hopes of wearing it for this Connecticut chap I’d been seeing, and literally that day, he stopped contacting me. What you can’t see in this photo is that the tags are, sadly, still attached. Since it’s unworn, I can still wear it for the next lucky guy. 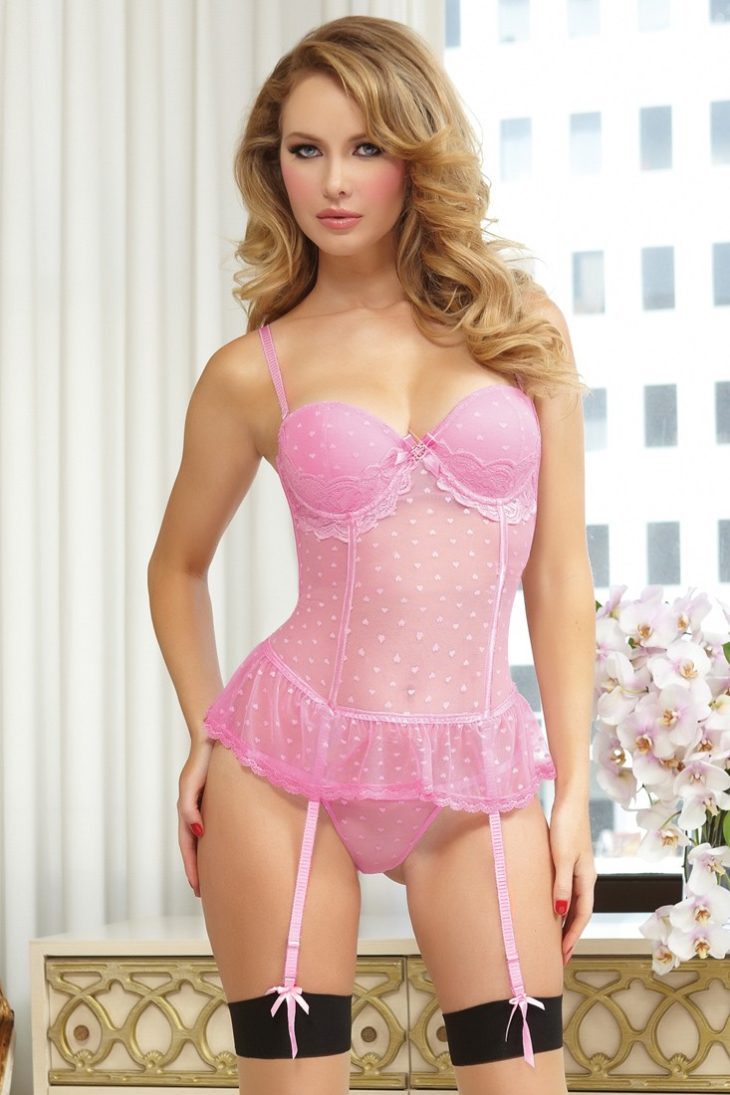 Who I Wore It For:Paul, my long-distance love

Notes: I flew down south to see my now ex-boyfriend for Valentine’s Day, and I purchased this beauty as a surprise. It had a matching thong which he ripped while I was still wearing it, because that’s how wonderfully this worked. I wore a loose sundress over it, which I took off in the car on our way from the airport to his place. I was in his front seat wearing nothing but this and heels, when he pulled over and we did it in the back parking lot of a pancake house. 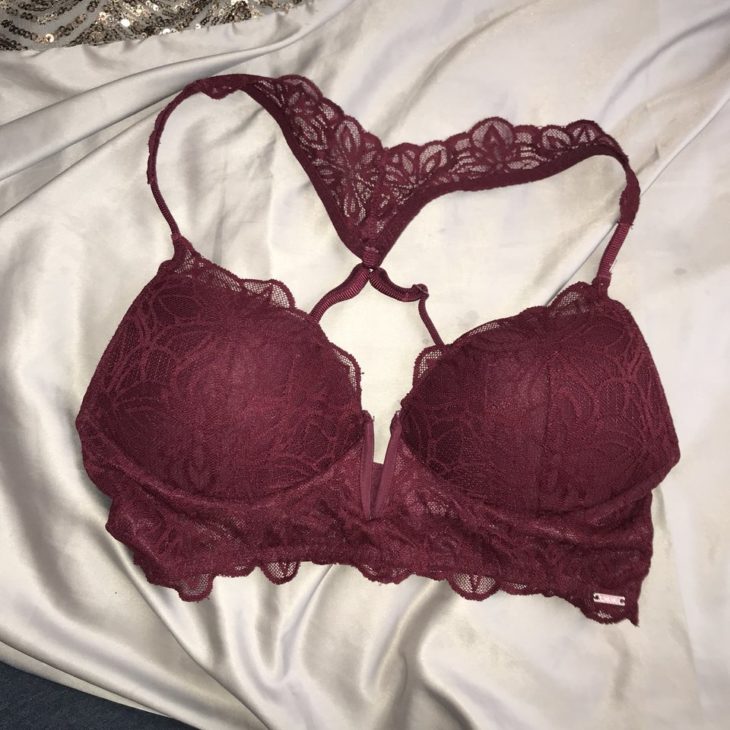 Notes:In college, I briefly dated this guy Jeff … who had a girlfriend at the time. I was recently out of a 3-year relationship with my high school boyfriend, and I took the attention where I could get it. I was stupid and it ended up biting me in the ass, but that’s neither here nor there. I wore this for him on Valentine’s Day BEFORE he took his girlfriend out for a nice dinner. He told me I could come over for 40 minutes, so I went there in this, we had sex, and he proceeded to iron his shirt for his date with his actual girlfriend. 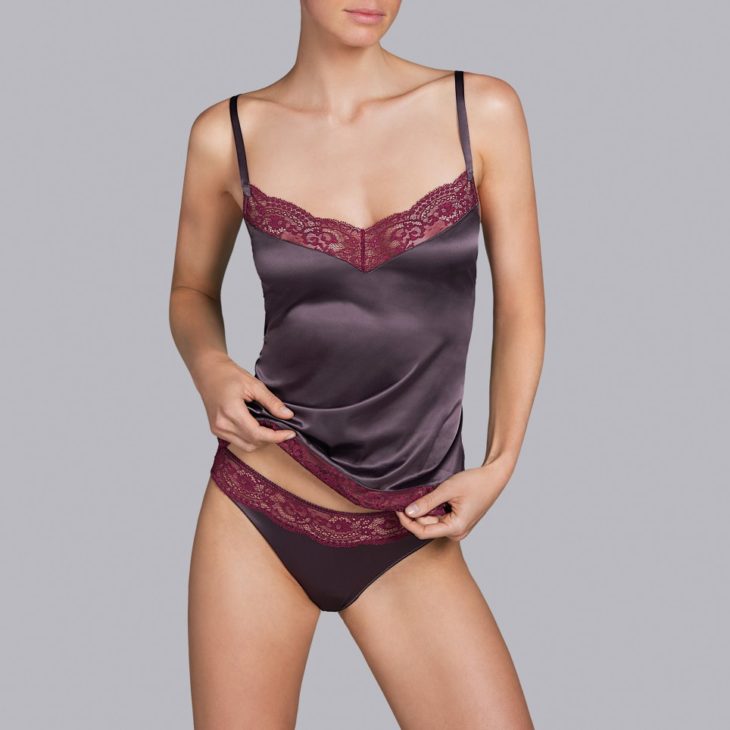 Who I Wore It For: My best friend, Rich

My Age: Too young to be wearing lingerie

Notes: There was a brief period of time in high school, and then even during college, when I was hooking up with my best friend. To this day,  I love him like a brother. I’m not sure where I got those thigh-high stockings, but I know for a fact that the corset is from Forever 21. Wearing this for him was the strangest experience ever, because once I emerged from my bathroom wearing it, I had to face the fact that we were going to have sex. I left the corset on while we did it, and the boning (heh) from the corset chaffed my skin so badly that he had to put lotion on me afterwards. 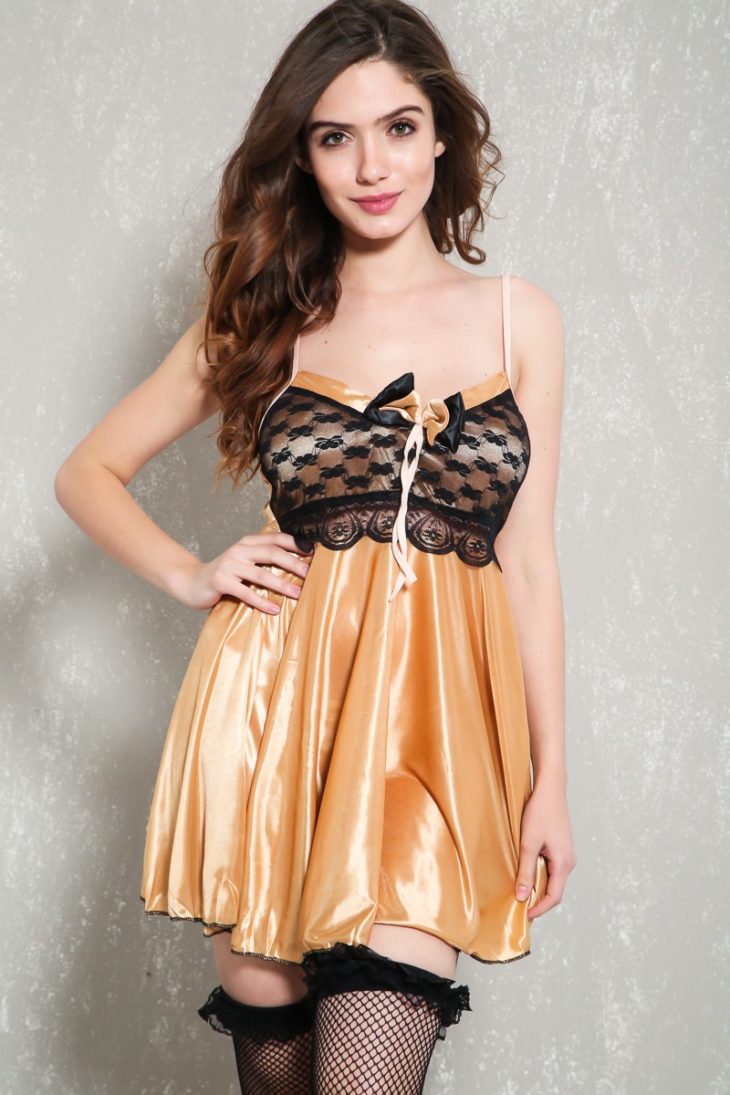 Who I Wore It For: Derek, the one that got away

Notes: He was working as a camp counselor for underprivileged children (I know…) in upstate New York during the summers we were in college together. We were in love, but having our issues, so I jumped on the chance to visit when he invited me there for a weekend. We would sightsee, do nature-y things and make love. You can’t really tell, but this nightie is, for the most part, see-through. I thought it was pretty and romantic, but not a “fuck me now” getup— the perfect option for bedtime attire. I put it on and got into bed with him expecting a reaction, but he rolled over and fell asleep. We broke up one week later. 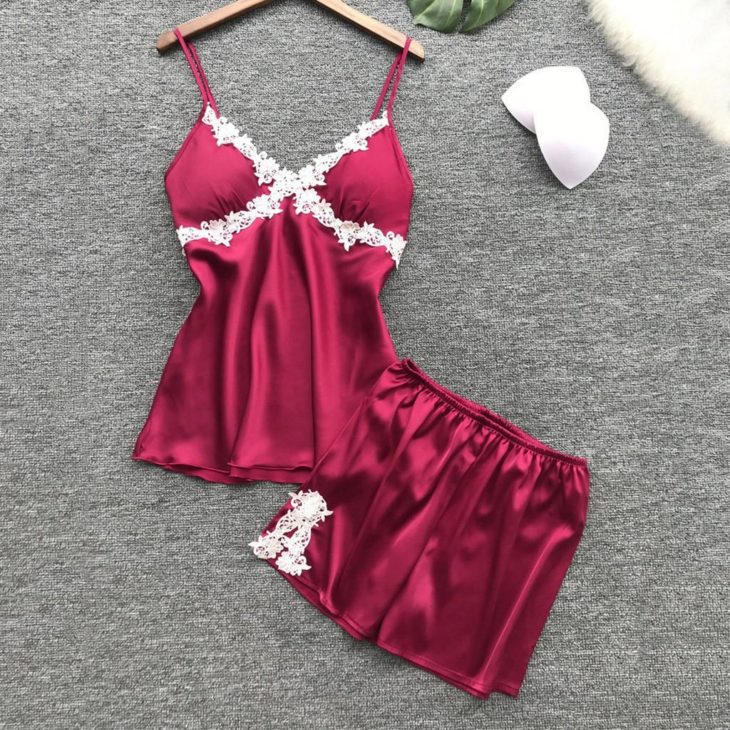 Who I Wore It For: Also for Derek, the one that got away

Notes: I had the genius idea to wear this (with heels and nothing else) under a short winter coat, and show up at my boyfriend’s apartment as a Christmas surprise. When his roommate Kevin answered the door, he told me that my man was upstairs and to lead the way. Already appearing to be naked under the coat, I knew that if I walked in front of Kevin, he would see my bare ass and probably my vagina. I insisted that he go up first, but he wasn’t having it, so I had to admit to Kevin that I was almost completely naked under the coat, therefore, I needed him to walk up before me. Once I got to Derek’s room, I took off the coat and we went at it like rabbits.

*Looking at all of this lingerie has forced me to realize that I must be unhappy with my stomach. Let the ab workouts begin.

Travel Tip: 5 Amazing Things To Do In Cuba