Two weeks ago, Belvedere Vodka tweeted an ad depicting a man pulling a surprised, open-mouthed woman down onto his lap. The headline read: “Unlike some people, Belvedere always goes down smoothly.” Decent people got the skeevies and called the ad out as rapey. Belvedere quickly tweeted that they were sorry “if any of our fans were offended” — but not sorry for the actual creepy ad — and made a donation to the Rape And Incest National Network. 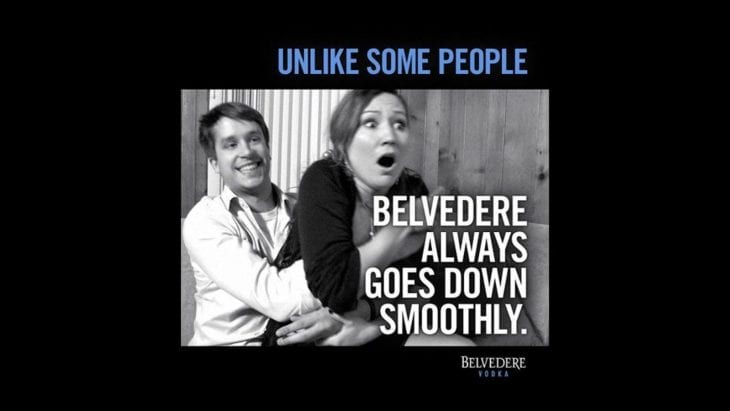 Now, Alicyn Packard, the actress who starred in a comedy sketch from which Belvedere appropriated her image, is suing its parent company Moet Hennesey. Packard’s lawsuit claims emotional distress from appearing in such a reviled ad and claims Belvedere did not have permission to use her image (misappropriation of likeness). The company allegedly ganked her image from a comedy video made by her company, Strickly Viral Productions. “To be affiliated with an ad that’s so offensive to so many has just been horrible,” she told KTLA.

Why Belvedere Vodka, which presumably has a fat advertising budget, would resort to stealing an image for one of their ad campaigns is beyond me. If they really, really wanted to do this rapey ad, they couldn’t have hired an actor and actress with their own money?

This is sort of a side tangent, but Amelia and I were also discussing Belvedere’s apparent blind spot when it comes to using stock images to depict controversial scenarios such as this. Generally speaking in journalism and on the blogosphere, you are not supposed to use a nondescript  stock image photo that portrays someone in a negative light. An example would be using a random picture of a dude underneth the headline “I Raped My Girlfriend!” If the photograph is a man who is posed pretending to attack a woman, that headline is okay because he has consented to have his image used that way.

This is precisely what happened with a little black girl, whose stock modeling photo was used in anti-abortion billboards. The young model’s mother was not happy her daughter’s image was used in anti-abortion imagery. The whole thing can be somewhat of a grey area, because it only seems to be a problem if the person whose image is being used complains, but it requires the photo editor/blogger make a judgment call.  The wise thing to do is not to take identifiable images of people — much less steal images of people —  and depict them in controversial or offensive ways.

Of course, there is always the possibility that Belvedere and/or its ad agency had no clue at all that their ad was rapey. That’s a different, bigger problem entirely.

A Comprehensive Guide To Celebrity Look-alikes