Music has been central to Anna Demis’s life before she was even alive. The Ukrainian pianist was born in Kyiv to a musical family, and she credits her natural proclivity to music to her mother who attended choir classes while pregnant with her. Wasting no time, she started learning how to play the piano at home at the age of three.

Her natural talents led her to study at a top conservatory in Kyiv. Upon graduating, she began sharing her talents raising Ukraine’s next generation of musicians as a piano teacher.

After a few years, though, a lack of opportunities for musicians and a desire to broaden her horizons led Demis to pack up and move to Dubai in pursuit of a performing career. What happened next, most aspiring artists could only dream of. 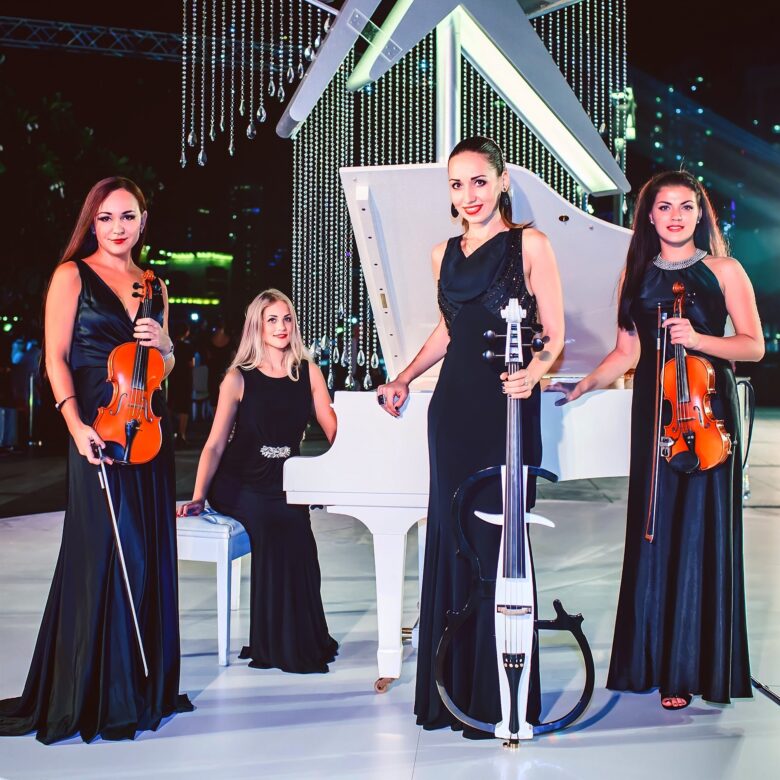 Beginning as a freelance pianist in 2013, she ascended the ranks of live performers in the UAE and quickly became one of the most sought-after professionals in the country. True talent gets noticed quickly in Dubai, and Demis is the embodiment of this. Starting out as a lobby pianist in one of Dubai’s largest resorts, she was asked by a few locals to perform at weddings. One of these just happened to be a Sheikha.

“Word of mouth is the best PR in Dubai. This is how I first got noticed, made connections, and eventually played at Royal Weddings.”

Throughout her Dubai tenure, she was tapped to play over a thousand weddings, performing for Sheiks and playing at Royal Marriages and Corporate Events. Her career in the country culminated with her winning the Entertainer of the Year 2019 award. 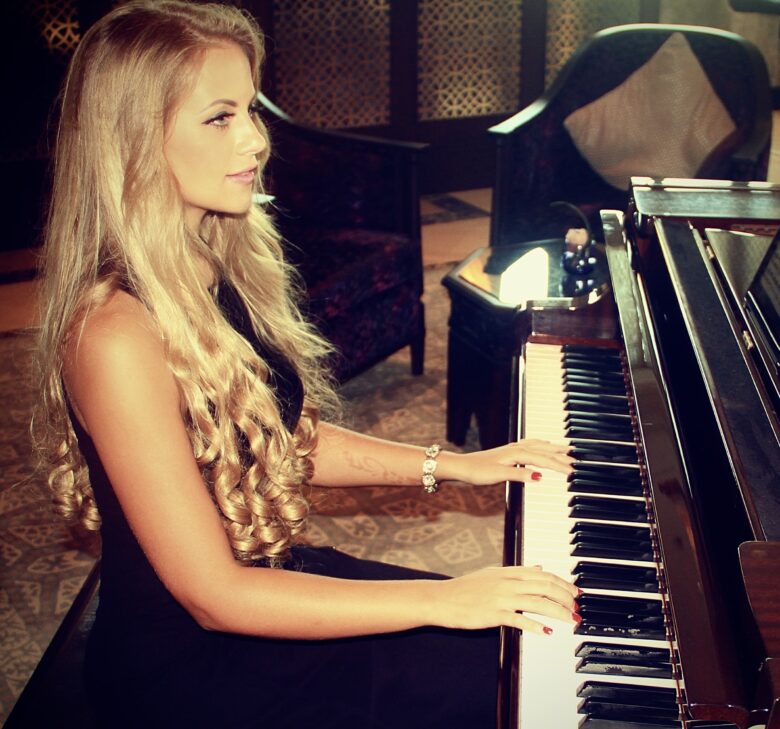 Performing in the Middle East helped her not only develop a lucrative music career but more importantly, gave her a chance to spread her wings stylistically. Her gigs at weddings for over a dozen different nationalities helped her build up a repertoire of 300+ Arabic, Hindi, and Turkish songs, among several others.

Demis further honed this unique style by performing not only as a solo pianist but also by collaborating with other musicians of different ranks. Her sound is often characterized as elegant and sensual and it resonates emotionally with her audiences of varying backgrounds.

“I love playing at weddings. It’s still one of my favorite types of events. I just love seeing the joy in the eyes of the newlyweds and it makes me so happy to embellish the most important day of their lives.”

Her talent didn’t just reach a small circle of elites, though. Her massive social media presence garnered her over 60,000 Instagram followers, some of whom would recognize her in shopping malls and on the streets.

Despite her incredible success in Dubai, Demis, ever hungry to grow as an artist, decided it was time to begin a new chapter. In 2020, the Middle East’s most demanded musician moved to New York City to be closer to her family who had relocated there a few years prior.

“I felt like Dubai was too small for me and I wanted to challenge myself and move to New York, where my family lives. My parents and sister had been trying to convince me to move to the USA for a very long time. However, I was mesmerized by the warm, opulent Emirates and it was very challenging to leave everything and move to a completely new country. I hadn’t seen the winter’s snow in 7 years!” 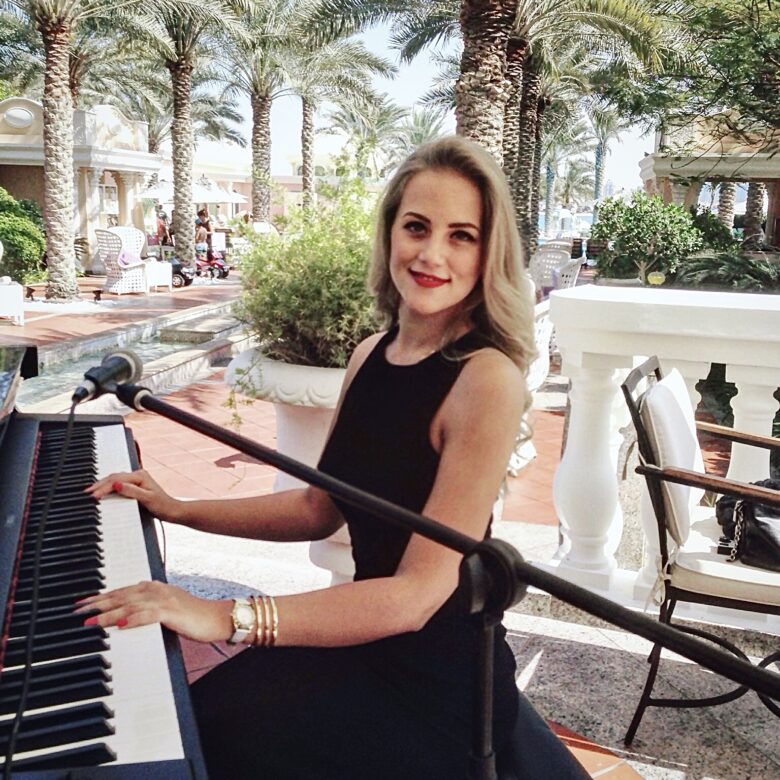 Leaving the UAE’s permanent summer vibe wasn’t easy. To make matters worse, the COVID-19 pandemic hit right after she arrived in America, making networking a nightmare. However, Demis, always inventive, found a solution. She changed her social media brand to reflect her relocation (@pianist.newyork) and reached out to local musicians on the platform about collaboration.

In that respect, her New York career started much like it did in Dubai– through hard work, practice, and putting herself out there. No agent or PR team, just talent and hard work.

“I’m 100% self-made. Nobody ever helped me. I even developed my own website.”

Another way she stayed busy through lockdowns involved cataloging her hundreds of arrangements of pop songs over the years as sheet music and publishing them online through www.musicnotes.com, a major distributor. She had learned most of the songs by ear but decided to start transcribing them for her fans.

Nowadays, Demis is taking time away from the spotlight to focus on her most demanding career move– motherhood! The music never stops, though. She still performs to support her family, occasionally appearing to play at more exclusive, intimate lounges. She’s frequently invited as a guest pianist at the New York Athletic Club, a super-exclusive sports club overlooking Central Park, as well as an elegant, white lounge at Generation Next Fertility Center in Manhattan. 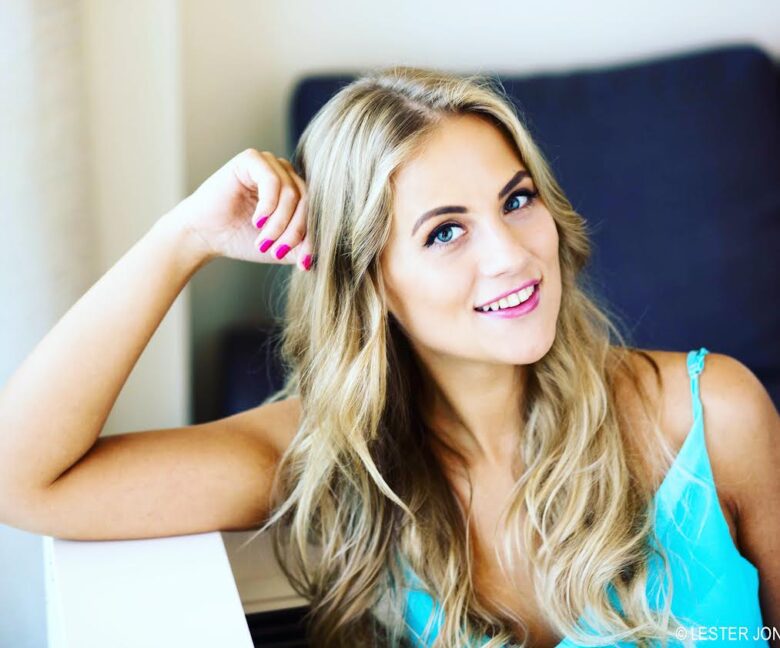 What’s more, she’s reinventing her live show. Demis is working on a new, one-woman, multi-instrumental project for future performances. While taking care of the baby, the self-made artist is learning how to DJ, and play the saxophone and drums.

“This is my dream project. I want to combine these instruments and mix them all. together”

Anna Demis is a Ukrainian-born pianist based in NYC. Having been classically trained in Kyiv’s Tchaikovsky National Academy of Music, her talents have led her to perform at hundreds of high-profile events in the UAE, USA, and beyond. She performs and composes a wide range of styles including wedding songs, classical music, jazz, and many more.

Benefits Of Using Porcelain Dinner Set For Your Daily Use