Antonio Brown Latest News: Amidst WR Shortage Could He Get Signed?

It wasn’t long ago that Antonio Brown was spouting that he was quitting the NFL and going back to school.

After being put on administrative leave by the Steelers, then released by the Oakland Raiders, then also getting released by the Patriots, AB had had enough. He bashed Robert Kraft and then said that he was leaving the NFL.

But not shortly after, he took to a live feed apologizing and stating that he is still training and ready to play. He asked for the world to let NFL teams know that he’s ready to play [and be a team player]. Despite this, some sports sites have odds that favor Antonio Brown not playing in 2019. 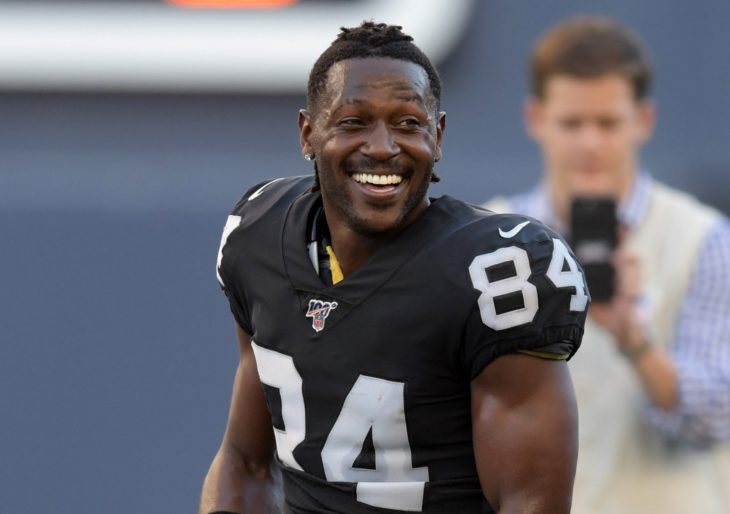 The Cowboys and Dak Prescott are hurting for targets. And we just might see them pick him up after the NFL trade deadline, which is rapidly approaching –October 29th. If that happened, the Cowboys would be right back in it with a No. 1 receiver, and if AB remained on good behavior when Amari Cooper comes back, the Cowboys would be a difficult team for secondaries to stop.

But as it was pointed out on First Take, there is a lot that comes with Antonio Brown. He is pretty much uncoverable and will help you win games. He can probably step on the field today and grab ten receptions fro well over 100-yards. So, on the field, he is a gem. But what about the overall health of the organization? Is winning those games worth the hit to the team’s integrity? Michael Irvin thinks so. And Stephen A. Smith seems to think so. But, we have to wonder, if maybe Stephen A. is just a closeted Cowboys hater who wants to see that destroy itself from the inside out.

More Antonio Brown drama has just come out that makes his grievances look like clown moves. He’s been trying to recoup 30 million dollars from the Oakland Raiders. However, his claim to guaranteed pay was just significantly undermined when the Raiders released multiple text messages from Antonio Brown to Mark Davis requesting for the Raiders to release him. But even if he doesn’t get that money, he’s still looking for unpaid Week 1 salary from the Raiders, an unpaid Week 3 salary from the Pats, as well as a 1 million dollar 2019 guarantee from the Pats and a 20 million dollar 2022 option from New England, not to mention the 9 Million dollar signing bonus. So, with all of the injuries around the NFL, will anyone take a chance on AB?

You can’t deny the fact that Brown made an immediate impact with the Patriots. He came over with one week to prepare, and the next week he played. He picked up four catches for 56 yards and a touchdown. There are several teams right now that could use that kind of immediate impact. Not only the Cowboys – and the Patriots –  but the 49ers are short in receivers, and the Colts could use some help, the Ravens need a serious threat, the Saints as well, and the Packers. Imagine AB’s ability to shake loose, paired with the perfect passing of Aaron Rodgers … that could be an unstoppable duo. But it could also be a giant stick of dynamite.

Will Antonio Brown play in 2019? We don’t see why certain teams would hop on guys like Kareem Hunt after getting released on the heels of serious allegations and not consider Brown. We think that he’ll play on a one-season deal for some desperate team shortly after the trade deadline and make an immediate impact, whether that impact is helping the team to win or sewing chaos.

What it takes to be a great Tour Guide