Ask A Married Guy: “What Can I Do When The Sex Dies?”

Meet our friend Tom. He’s a married guy with tons of relationship experience, and a skilled advice giver who’s here to answer all your pressing sex, dating and relationship questions. Have a query for Tom?

I’ve been dating my girlfriend for a year. I love her a whole bunch, but the glaring hole in our relationship is our sex life. We started off having sex almost every time we saw each other. Now, sex has become this very sad, mechanical practice that occurs very seldom.

We went from having sex two to three times per week to about once every ten days. And at this point, there’s nothing romantic about it. My girlfriend rejects any of my advances, and basically the process in which sex is initiated is when she points at the bed and asks if we want to have sex. And then when it’s over, there is no post coital, nothing romantic––just a return to “30 Rock” on Netflix. I don’t expect her to simply accept my advances (what kind of a feminist would I be if this were the case?), but I feel like she’s annoyed when I want to have sex.

My girlfriend is a very sexual person who has had several partners and has told me stories about the sexual nature of her past relationships. In the past, she’s been crass and has aggressively sexted with previous partners (through information that she has shared with me)––things that she doesn’t do with me. At this point, I feel like my girlfriend either doesn’t find me attractive, doesn’t enjoy sex with me, or possibly both. I’ve tried to engage with her in conversations about this, and she gets very defensive very quickly and suggests terminating the relationship.

I love my girlfriend very much, but this isn’t working on a romantic or sexual level. She’s a perfect partner in the home and when it comes to navigating the trials of my life, but it is simultaneously causing other problems as well. Give it to me straight. What should I do? 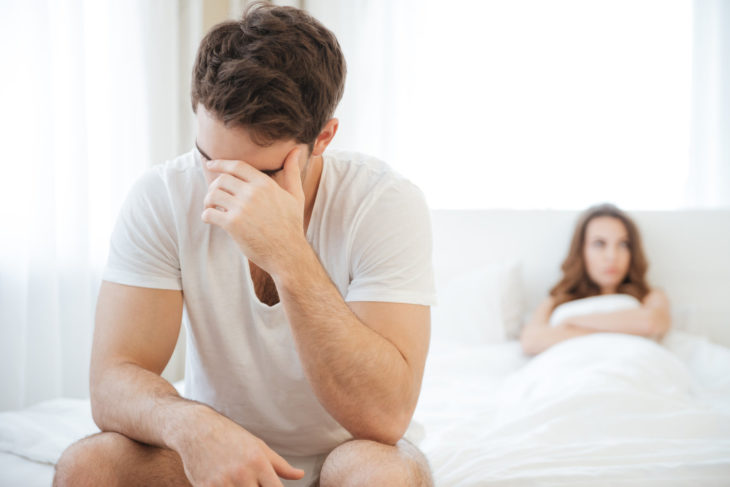 Sex has become a “sad, mechanical practice”? That sounds like transactional drudgery. Call me an old romantic, but I think sex should have nothing in common with shift-work at a Russian saucepan factory.

The most unintentionally funny line in your letter was “sex is initiated is when she points at the bed and asks if we want to have sex.” Your girlfriend is reading The Kama Sutra for Terminators. That’s the most bloodless approach to copulation I have ever heard. And I grew up in England.

The immediate return to “30 Rock” after sex is painful. Tina Fey has a lot to answer for. Her Liz Lemon character has made it “cool” for young women to feel that sandwiches are better than sex. Total myth. They are only AS GOOD as sex, and only after actual sex. Maybe that is your Hail Mary pass: buy deli meats, antipasti and Italian bread, and tell your girlfriend that you want to make her a delicious pork sandwich, right after you make that other pork sandwich.

You asked for it straight, so I’ll give it straight. Yes, this girl does NOT want to have sex with you very much. She is not into it right now. The question is “Why?” The issue could be something about her, or her feelings about you, or a little of both. You don’t know because although you want to address the problem(s), she gets defensive when you ask her to discuss it, and quickly suggests ending the relationship. This is a sign of insecurity – threatening to blow something up rather than calmly explore if there are fixable problems underlying the situation. It’s childish, but we’ve all done it.

Give the lady three strikes. On one of your date nights, assemble her favorite stuff: bath soaps, chocolate, a “Best of Fey” DVD (whatever she’s into). Then try to start a discussion about the sex not going so great. Be gentle and compassionate — lots of “I” statements and lots of reassurance about how deeply you want to be with her. And you stirred up this hornet’s nest, so prep your ego for your worst nightmares e.g. “you have a tiny penis,” “sex with you is like sex with my brother (and I used to fuck my brother),” or “your merest touch makes my vagina die a thousand tiny deaths,” etc. The first time will probably go badly. Wait two weeks, and try again. If that crashes and burns, try one last time. Then see where you are. Did you recognize some of the problems between you? Do you both want to find away around them? And did you both come up with potential behavior changes that could lead to improvement? If you answered “yes” to any of those questions, there is hope. A lot of it. Good for you guys.

But if you haven’t come up with a reasonable diagnosis of at least ONE underlying problem in your sexual connection after three INCREDIBLY good faith attempts, that’s a bad sign. And if you can’t agree on even ONE slight change in your dynamic to improve the sex, that’s an even worse sign. And there is writing on that sign. The writing says: “Break up with this person.”

There is a nasty twist here, because if you break up with her, she WILL suddenly want to fuck your brains out. It’s scientific fact. And you are weak and you will want to. A lot. But it will be sex driven by pure despair (admittedly the hottest kind), and the hotness will fade if you get back together, leaving you back at square one.

Give yourselves three attempts at a sincere connection to get to bottom of the problems. That way, you give yourselves the best shot at actually moving forward. And if the relationship ends, you’ll have all the evidence you need to stay single, and avoid the breakup/makeup cycle.

An Open Letter To The Fat Girl