Although the Tarot is something very traditional fortunately it has benefited a lot from the technological era we are in, now it is easier to find information, it is no longer something that belongs to a few, so there is a great exposition of this theme everywhere, and of course many applications have been created that serve to learn, to read cards or just to have a little fun.

That is why we have selected applications related to the Tarot and they are designed to make anyone who is interested in the subject to enjoy them. Today we will present you brief history and TOP 5 best apps for you Android and Iphone. 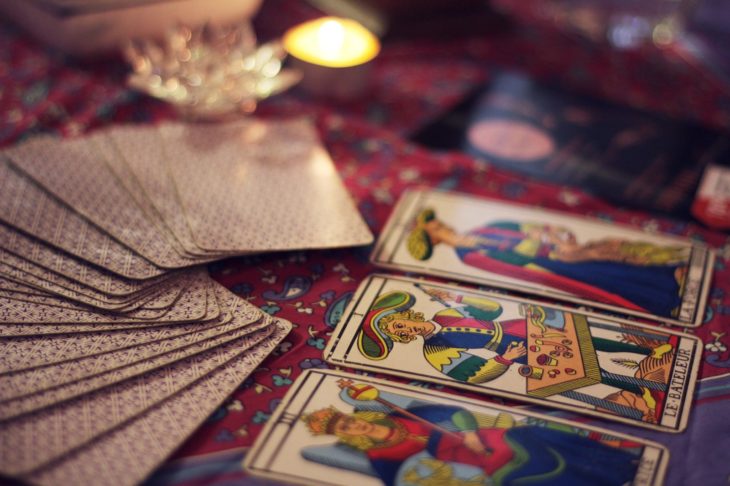 it is believed to have arrived in Europe from the Arab East around the 13th and 14th centuries. It first appeared in the courts of Italy during the Renaissance, but the exact time and place when the tarot was actually created remains unknown to this day. They associated him with gypsies, witches, dark forces and Kabbalah, and underground magical traditions, but also mere superstition. It served as an ordinary card game in its beginnings, and from the beginning it was the subject of opposition from the priest, the church.

The first decks in Europe were painted in the courts of Venice, Florence and Milan. The oldest surviving deck of tarot cards is by the artist Bonifacio Bembo. These were real artistic masterpieces, but little or almost nothing has been preserved since that time. Today we have hundreds of different decks, but always with the same established meaning and interpretation of symbols and numbers on a particular map.

The beginning of the mystery 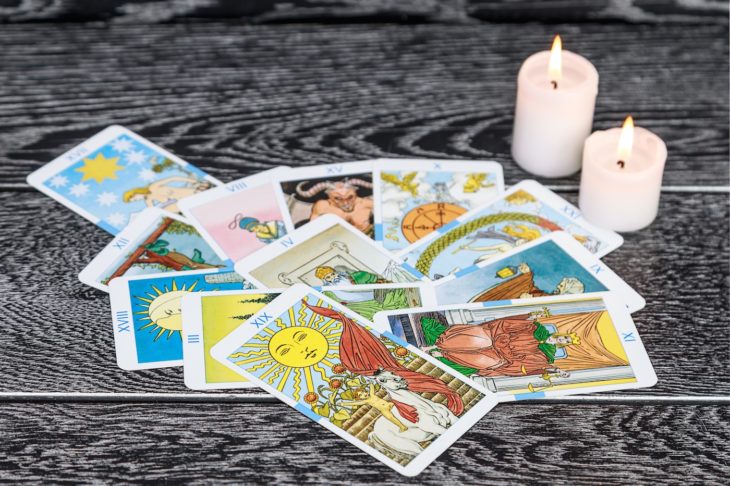 However, in 1781 A.C. Gebelin, a French priest and expert in mythology, came to the conclusion by examination that the tarot cards were the lost Egyptian Book of Thoth, the book of secrets of a long-vanished civilization. In addition to de Gebelin, Éliphas Lévi began searching for the “key” in the tarot in the 19th century, or, in other words, uncovering a secret that would unite all magical systems and techniques and open the door to interpreting the mystical meanings of each card for personal and general transformation.

The final transformation of the tarot into high occult magic came through the Hermetic Order of the Golden Dawn, whose name is today widely misinterpreted and taken as one pleases. Their goal was to unite complete Western magic, myths and astrology with Kabbalah and to create a unique synthesis. 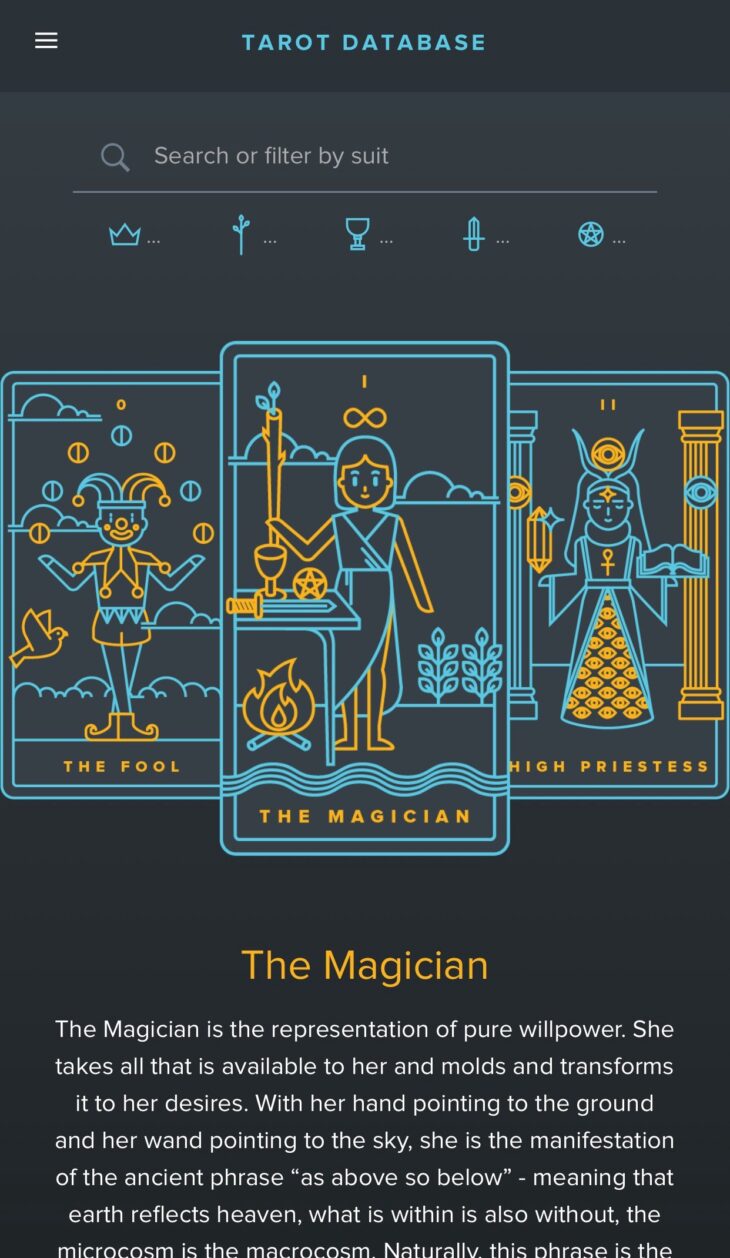 What I like most about this application is that it takes the default language of the device where you install it, which means that there is a lot of information available in Spanish, for example, although there is other information that is in English. You also have the option of drawing a card of the day where you can see the comparison between several decks of that card and on the other hand you can do readings including one in free form where you can put the cards as you wish. The only thing that I did not like very much was that in the runs cards came out of many mixed Tarots, not one, although I know that for some this feature can be interesting because that way you can know many decks. Available on both Google Play i Apple App Store. 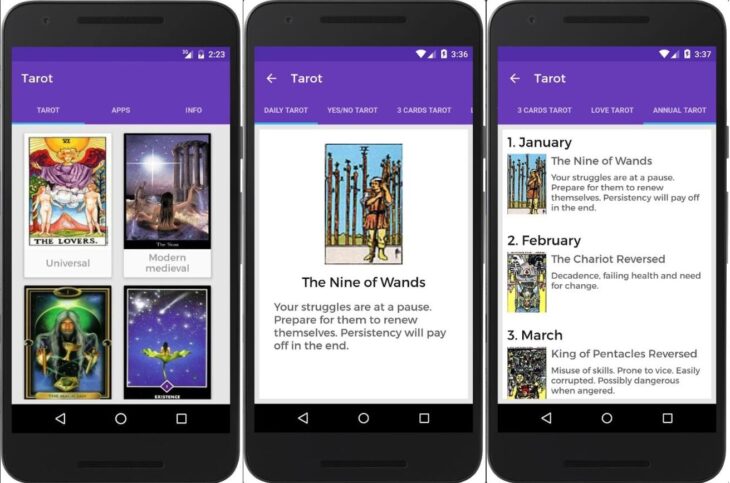 If you are looking to spend some time having fun on your phone, you might as well learn something about your future. This app, developed by horoscope.guru, can help you answer the questions that you want answers to and it is really easy to use. You can download it to your Android or find it on App Store,  and start with the readings right now. You can opt for yes-no tarot, 3 cards tarot and there are some other options as well, but we will not reveal everything. Furthermore, the design is quite good and the application is simple to use.

We like this app very much and the good thing is that it also has an application where you can see all the cards and it has a beautiful design. But the good thing about this application is that, in addition to showing what each card means, it also allows you to make several runs, which can keep a detailed record day by day, and you can even rate each roll according to the feeling of it (good or bad) ) and according to some keywords. Something that is more a matter of personal taste but I would like it to be changed is that many inverted cards come out, I think they come out many more times than with a deck Tarot physics, but again, it is more a matter of personal taste. 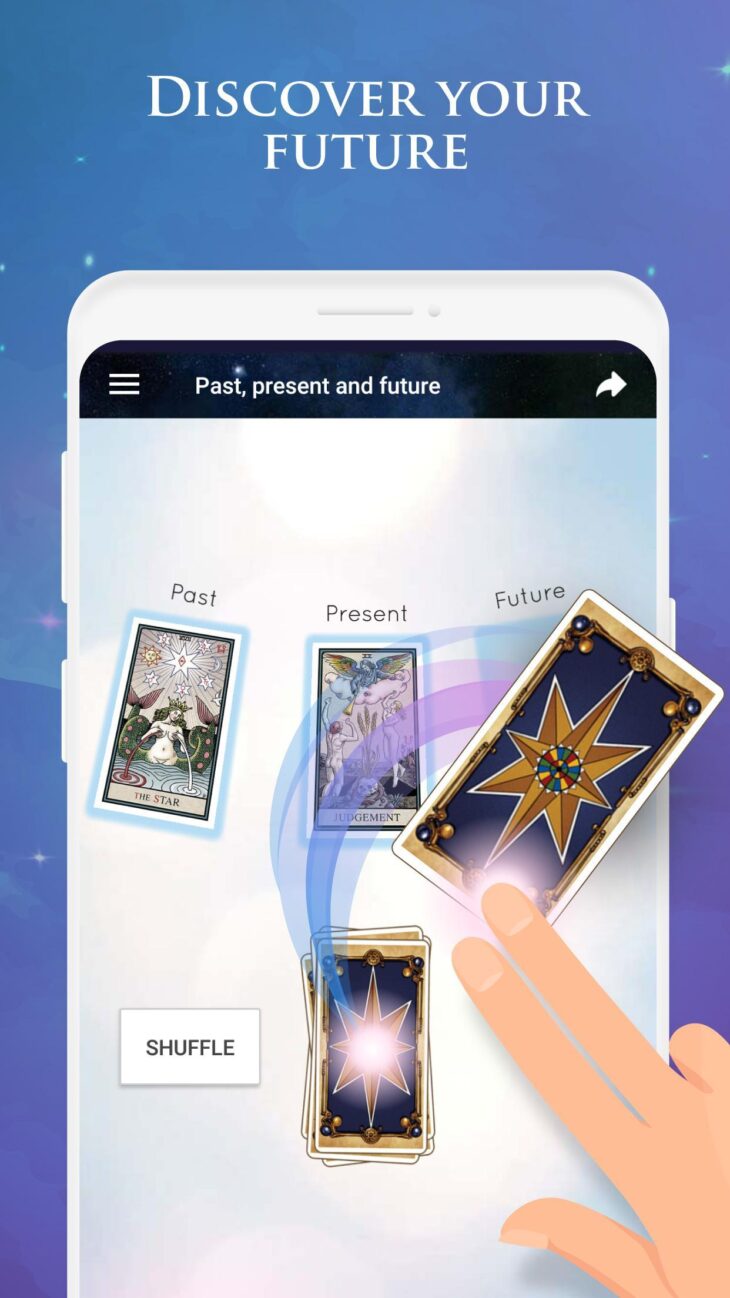 This application is similar to the previous one because it is also created from a physical deck, one that I really loved for its simplicity and tenderness. With it you can also make different types of print runs, you can even get the Celtic cross and other more advanced print runs in different areas, there are also small texts with the meaning of the letters and if you register you can keep a diary of the print runs make. Among the things that I did not like so much are that like the previous application, it is only available in English, which can be a problem for some, the other is that it is not updated with the cards of the minor arcana of the latest version of the deck in which they are more elaborate and it is not only the symbol of the arcane and the number. And lastly it is only available for Apple products, not Android.

With this application you will be able to know better what awaits you in your romantic relationships, in your personal relationships and also your work relationships. Every day you can make a Tarot spread totally free, as well as read your horoscope with daily, weekly tips and monthly summaries.

Daily card reading includes a free love run and tips for tackling the professional environment. The horoscope will tell you about love, money, health and work. All this under a high resolution interface adaptable to both old and new generation mobiles. Available at both Google Play i Apple App Store. 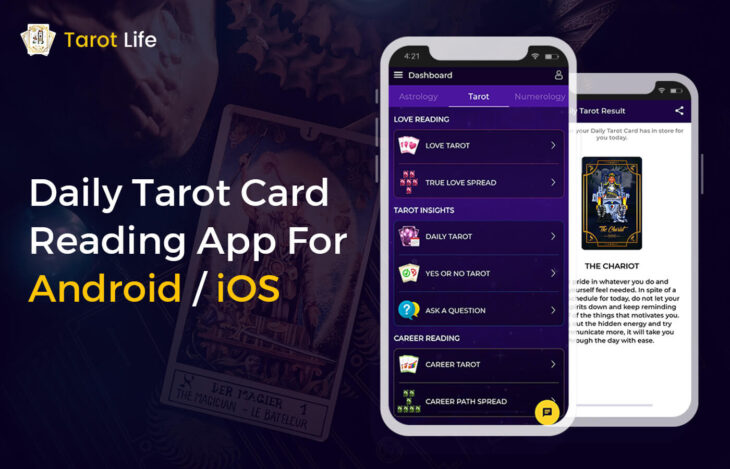 Install one of these apps and find out your destiny and many other things while having fun.

Hidden Dangers of a Faulty Boiler

Digital Time Management – What Needs To Be...