Brooke Birmingham, author of the health and fitness blog, “Brooke: Not On A Diet,” was able to lose over 170 pounds without surgery or fad diets. She dropped the weight the good ol’ fashioned way: cutting out processed food, counting calories, and exercising more. The process took her four years of hard work (“I literally worked my ass off,” she says of meeting her goal weight in May of 2013), so she was understandably thrilled when she was contacted by Shape magazine editors who wanted to feature her in their “Success Stories” section. After doing a phone interview and sending over a photo of herself in a bikini for the “after” photo (shown above), Brooke couldn’t wait to see her story in print. But then an editor of Shape emailed her, saying there was a problem: if she wanted to be featured in the magazine, she would need to put a shirt on. 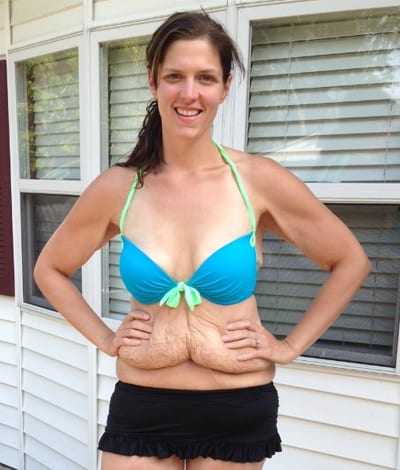 As anyone who’s ever flipped through Shape knows, it’s quite rare to see any women in the magazine wearing shirts. Bikinis, sports bras, and skintight booty shorts are de rigeur, and that’s exactly what they requested of Brooke — until she sent them her photo, they saw the loose skin around her waist (a very, very common result of massive weight loss), and changed their minds.

Brooke handled the magazine’s request like the badass that she is: she refused to put a shirt on, and told Shape if they wouldn’t use her original photo, she would have to respectfully decline being featured. Then she wrote a post about it on her blog, including screenshots of her email exchange with the Shape writer:

If anything, they should want my picture on their site. My body is real, not photoshopped or hidden because I feel like I should be ashamed. This is a body after losing 172 pounds, a body that has done amazing things, and looks AMAZING in a freaking bikini… This is the type of body they should have featured because it can give people hope. Hope that they can lose weight healthfully and even if they don’t end up with airbrushed abs of steel, they’re gorgeous and shouldn’t be ashamed of whatever imperfection they believe they have.

The blog post went viral. Shape has yet to issue an explanation or apology, but it’s safe to say that more people have now seen Brooke’s bikini photo than if it had been featured in the magazine, and the vast majority of them aren’t telling Brooke to put a shirt on, they’re telling Shape to get a damn clue.

Dishonest practices like Brooke’s Shape debacle are a perfect example of how women just can’t win. We’re constantly told, “Lose weight so you can wear a bikini!” then, if we do, and our bodies show any evidence of that weight loss (loose skin, for example), we’re told, “Yuck! Put a shirt on!” Shape measured Brooke’s success by her weight loss, but when that “success” didn’t look the way they wanted it to, they changed their definition. Fuck that noise.

“If I couldn’t have the picture of me in my bikini to go along with my story, then it wasn’t MY story,” Brooke writes. “So, if I couldn’t tell it my way, then they weren’t going to be able to tell it at all.”

[Photo via Brooke: Not On A Diet]

Here is what NSFW and SFW means!