Early last month, the light sentencing of convicted rapist Brock Turner outraged many for the message it sent to victims around the nation that not having “severe impact” on rapists was a higher priority than justice. His victim’s letter to him became widely shared, and it’s worth noting how, in the letter, she referenced “his attorney’s twisted logic,” and how Turner’s attorney, Mike Armstrong, “attempt[ed] to paint a picture of me, the face of girls gone wild, as if somehow that would make it so that I had this coming for me.” Now, a newly released transcript from Brock Turner’s trial shines a light on the “twisted logic” the unnamed woman was referring to.

In the released transcript of the defense’s cross examination, Turner’s attorney fixated on the victim’s drinking habits, history of partying in college, and her loose, “silly” behavior during the party on the night of the assault. Armstrong told Buzzfeed that the woman had “stated earlier” in the trial that she had no memory of the assault or of Turner, claiming “any questioning would have been useless.” While this is understandable, the aspects of the woman’s life that Armstrong chose to focus on during the cross examination had no relevance to the fact that Turner made the decision to assault her, and paint a deliberately negative image of her as irresponsible and even deserving of what Turner chose to do to her.

See for yourself in a portion of the examination:

Q: You also talked about, fairly shortly after you got to the Kappa Alpha house, pretending to welcome people and singing and embarrassing your sister. That’s what you decided to do at that time; right? That was an intentional thing.

A: Intentional to welcome people or to be silly?

Q: Okay. And it would be the same thing when you drank the quantity of vodka in the red cup. You drank it all down at once; right?

Q: Okay. And that was a decision you made; right?

“And you did a lot of partying in college, right?” Armstrong added at some point, seeking confirmation rather than asking. “I did a decent amount,” the woman responded, adding that she “would not consider [herself] a party animal.”

Armstrong further asked if she had “blacked out” before from drinking, and about her dinner that night, without offering any insight into why any of these questions mattered or were related to the trial. In her own statement, the woman pointed out how “the sexual assault had been so clear,” yet she was still required to stand trial and “answer questions” like,  “Who made dinner? Did you drink with dinner? No, not even water? When did you drink? How much did you drink? What container did you drink out of? Who gave you the drink? How much do you usually drink?” 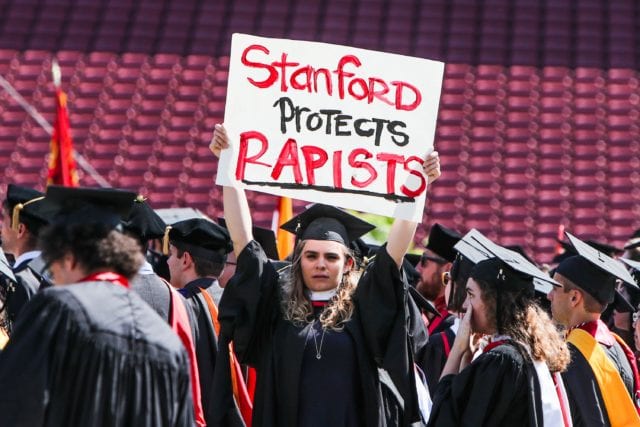 Cases like this one, in which Turner’s victim did not have to report him because Turner was caught with the woman’s half-naked, dirt-covered body behind a dumpster and restrained by two graduate students who called the police, are fairly rare. And while women who do report their own experiences overwhelmingly face skepticism, emotional abuse, and blame despite the statistical likelihood of their honesty, it’s now apparent that even when it’s clear as day what happened, victims of sexual assault will be treated with nearly the same disrespect. 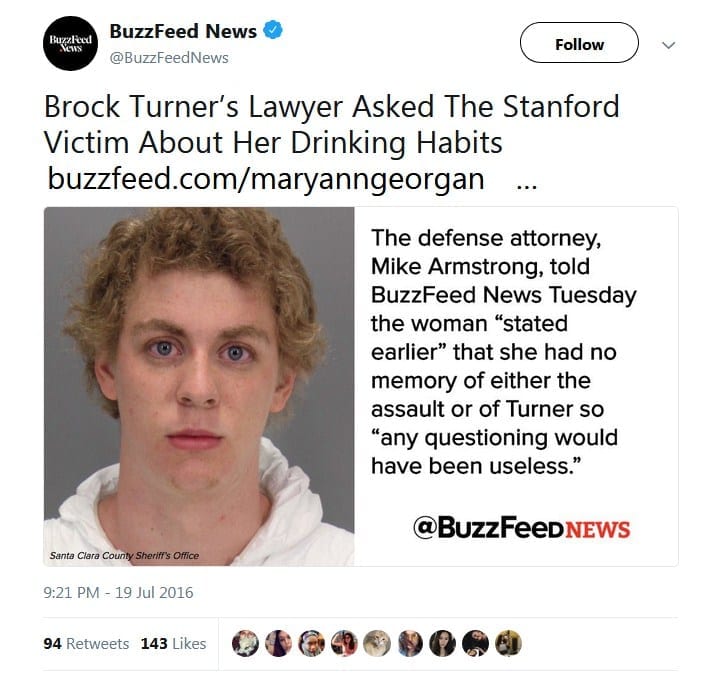 Authorities will always find some way to shift the responsibility from the rapist to their victim, trying to make it difficult to sympathize with the “loose party girl” society disdains. By offering short sentences to rapists whose defense teams utilize sexist victim-blaming tactics, those in positions of judicial power are not only condoning but encouraging this disturbing, gendered line of attack.

The Stanford rape victim was grilled by Brock Turner’s lawyer about her partying habits https://t.co/yNnGvkIy39 pic.twitter.com/Kjo9cckmhf 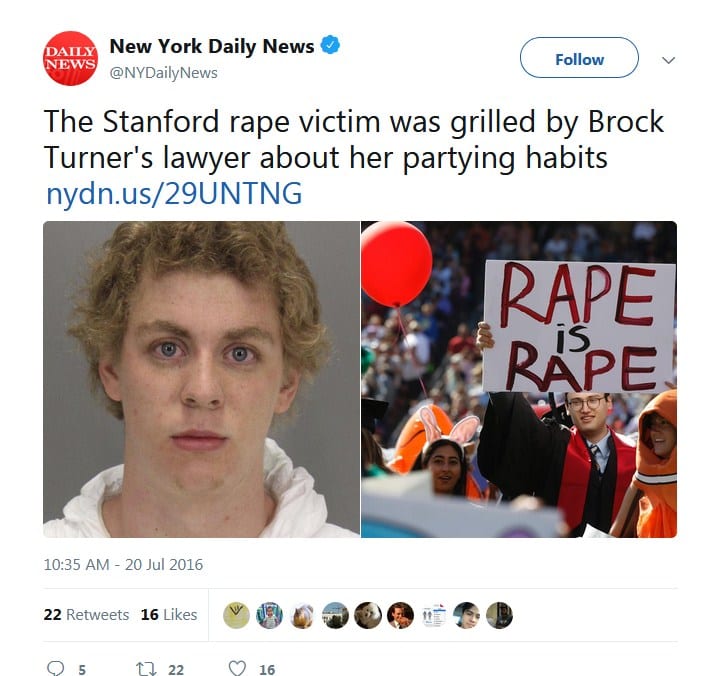 Fully cognizant of the retelling of the story that the defense had attempted to create, Turner’s victim, who didn’t shy away from expressing her outrage, set the record straight in her statement, saying, “This is not a story of another drunk college hook­up with poor decision making. Assault is not an accident.”

Turner and his father predominantly blamed his decision to commit sexual assault on “drinking” and a culture of promiscuity and sexual immorality on college campuses. And disturbingly enough, this rationale is shared by most young people, whom a study by The Telegraph revealed are more likely to view victims of sexual assault as partially responsible for their experiences if they were “drinking, flirting, or taking drugs” prior to being raped. According to some estimates, one in four female college students will be a victim of rape, rendering this not only sexist, but also heartless, line of thinking all the more dangerous.

Girl Talk: Why Am I Scared Of Men?

First Time For Everything: A Condom Got Lost Inside My Vagina