First Time For Everything: A Condom Got Lost Inside My Vagina

I always laughed when, in middle school, my friends worried about getting tampons stuck inside of them. I was the first to brush off any fear that anything could actually get stuck inside your vagina. I mean, how could you not know if something is up in there? However, I have been converted – a vagina can be a cavernous hiding spot for all sorts of paraphernalia. Somehow, unbeknownst to me, I once got a condom lost inside my vagina for days. Yes, days.

It happened in college when my nympho friend, Jane, dragged me out to a Valentine’s Day party hosted by a a foreign exchange student organization.

“You’ll definitely get laid. There’s so many hot guys with foreign accents,” she promised me, shoving condoms into my hand from her 500 count box.

We were packed into a house like sardines. Any which way I turned, I was face-to-face with a hot guy from just about every country on the map — Russia, Croatia, Argentina, England, France, Brazil, I spoke to them all. My bladder was about to explode, so I stepped out onto the patio in search of the ladies room.

“Is this the line?” I asked a tall, blonde-haired man with a sweet accent was standing before me.

“Yes, it is,” I answered, giving him a flirtatious smile, proceeding with the typical college party banter.

“Where are you from and what’s your major?” I interrogated.

“I’m Jonas, from Germany, and English is my major.”

After that party, Jonas began swinging by my dorm room, wooing me with various foreign wines. We’d sip wine from plastic cups that I would hoard from the cafeteria (classy, I know), make out furiously, and then do it in every position possible. At that time, I shared a room with a Pentecostal girl who was also a virgin. She was also, thankfully, a heavy sleeper. That girl could have slept through 50 shrieking babies running rampant in a monsoon, which I imagine Jonas and I occasionally sounded like. Lucky for us, whenever she passed out, we’d bang the brains out of each other, performing various acrobatics in my teensy-weensy twin bed, not even 10-feet away from my sleeping roommate. 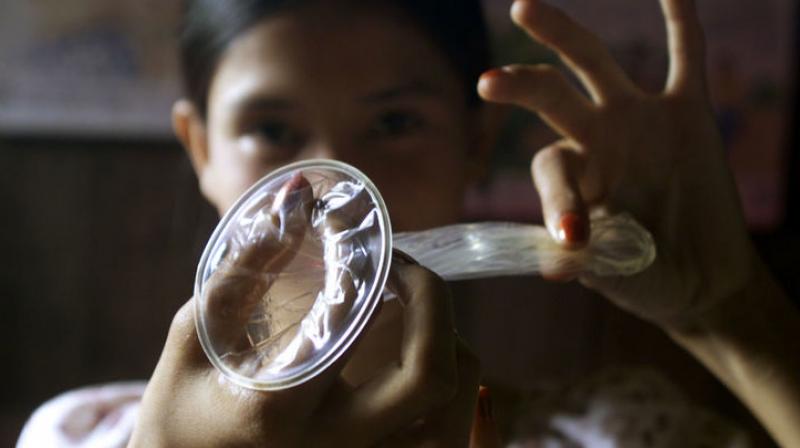 The sex was great. I’ll be bold and even say the best I’ve ever had, however, there was one small thing … quite literally. Jonas had just about the tiniest dick I had ever seen. Scratch that, he had THE tiniest dick I had ever seen. However, whoever said, “It’s not the size of the boat, but the motion in the ocean,” was right. His barely-there-manhood worked some magic.

One night after an evening out on the town, Jonas and I stumbled back to my dorm room, and found ourselves disappointed by the fact that my wholesome roommate was still up at 2 a.m., watching a rerun of the latest episode of “House.” Anything she knew about anatomy she learned from Greg House. But I didn’t want to give her a full-frontal introduction to sexual intercourse, so we made a dash to my bathroom.

I furiously made a dash down the hall to the nymphomaniac’s room.

“Don’t mind me,” I said, making it past her, reaching for a heaping handful of condoms from her large stash. “I’ll be out of your hair in a second.”

That night, we littered the bathroom with condoms and wrappers. Since Jonas had such a tiny penis, condoms didn’t always fit him well and slipped off regularly, which meant we went through more than usual. We went through all of those condoms that night. When we were finally done with our epic romp, we fell back onto the bathroom floor, laughing.

“Where’d the condom go?” He asked.

I laughed out loud and pointed all around the bathroom. There was a condom on the sink, one in the shower, three in the bathroom stall, and others randomly sprawled across the floor.

A few days later, I was sitting on the toilet, browsing through the latest issue of Cosmopolitan, you know, just tending to the usual business, when I looked down into the toilet bowl. I watched as a condom literally fell out of my vagina.

What the hell? Did I just give birth … to a condom?

My mind raced back to the marathon sex I just had three days earlier. I remembered Jonas questioning the whereabouts of that last condom that we used.

But no, it couldn’t possibly be. How did that thing stay inside of me for days without me feeling the slightest thing?

I quickly imagined the worst.

Could I be pregnant? How long did I have to take the morning after pill? What if I was pregnant? It’s only been three days. But still, I could be pregnant. Our child. He’s going back to Germany in two months. A broken upbringing. Our child would have a broken upbringing. How could a thing that’s supposed to be 99.99 percent effective fail, and fail so miserably? The morning-after pill can be used up to six days after, right?

I was getting ahead of myself. I escaped the bathroom and fumbled for my phone, dialing my nympho friend. She was well-versed in sexual mishaps and a frequent visitor to the local pharmacy. I often joked if they offered punch cards for the morning-after pill, she’d have a slew of free pills stashed in her room. The pharmacist practically knew her by name, prepping her pack as she strolled in at 2 a.m., with strawberry milk in hand, which she required as a chaser to her dose of Plan B.

“A condom just fell out of me. It’s been there for three days!” I shrieked into the phone.

She laughed. I didn’t comprehend how this could possibly be a laughing matter.

“Relax,” she started. “That’s happened to me before. Except, it wasn’t the full condom.”

Apparently, the condom her boyfriend had been wearing had snapped, leaving a tiny piece lodged inside her lady bits for days as well.

“The best course of action” — I already knew what she would say — “would be to go get a morning-after pill.”

Nothing felt better than the instant relief that came over me as I swallowed the pill.

I never did end up telling Jonas about the condom incident. I was honestly too embarrassed. How would I even begin to explain a used condom falling out of my vagina days after it got stuck up there? He didn’t question me about the lost condom after that night, and I figured there was no need to rehash the past. Besides, a woman has every right to decide how much she discloses when it comes to private matters associated with her lady bits, and quite frankly, I exercised that right. During our last two months together, we still did it, but not as often. And not without some anxiety on my end.

Incidentally, I was in Berlin, Germany recently and got a message from Jonas saying he wanted to see me. My mind raced back to this mishap years ago. I politely declined. Been there, done that, had the condom inside of me to prove it.

Slept With Many People? 5 Ways To See Where You Rank