Students at Columbia are upset because of a new awareness campaign around the issue of consent started by the school’s Sexual Violence Response(SVR) organization. As reported by Jezebel, a tipster sent in a photo of the posters, which read “Consent Is Bae.” The anonymous tipster is unhappy with this campaign, claiming that it “trivializes consent and appropriates African American Vernacular English.” The campaign is in place just in time for first year students to start moving in, but is understandably causing upset for a very real and widely-publicized issue with regards to campus sexual assault and how Columbia’s handled it in the past. 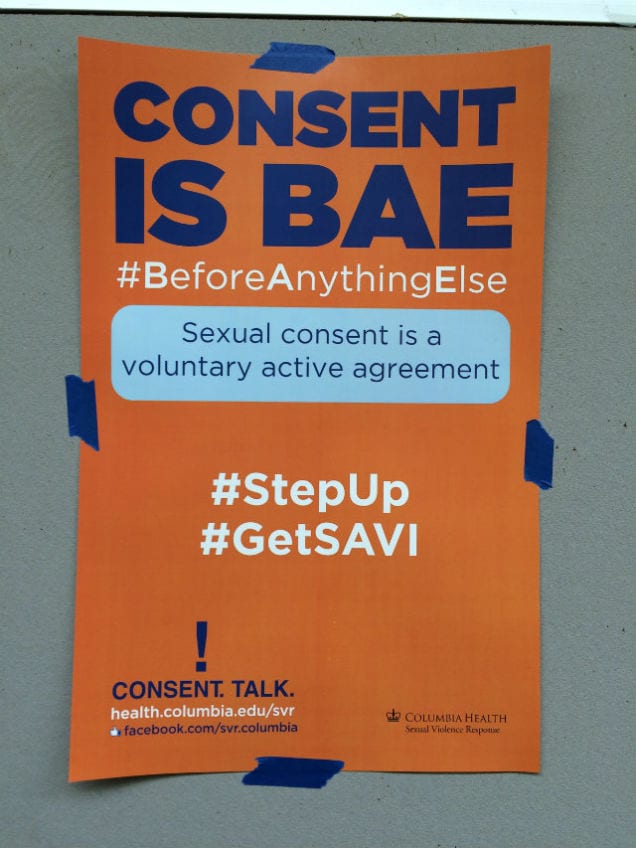 The issue of appropriation is also valid. Not unlike Pizza Hut tweeting that pizza is bae, this feels like yet another weird attempt at using slang to shill shit to the youths. But more importantly, treating the concept of consent as if it were a Cheesy Gordita Crunch Xtreme TacoBlaster minimizes a very important issue. Remember, Columbia is the same place where Emma Sulkowicz dragged a mattress around for an entire year to make a statement about how flippantly the school treated allegations of sexual assault. You’d think that after a widely publicized act of performance art and the consequent media frenzy that surrounded it, the SVR would do a better job of understanding and acknowledging consent as something that people need to take seriously. Hopefully, despite this teensy misstep, they’ll learn.

When Bae Has Seasonal Affective Disorder

Behind the Scenes: The Making of a Video...

CoupleThing: When Bae is Not Ashamed of Mood...