Tony Visconti is a British music producer who worked with the late David Bowie throughout his career. He is also a flappy-jawed man who, because he knows so much about music, is convinced that Adele’s voice isn’t 100% natural.  As a music-producin’ man with a considerable amount of experience under his belt, surely whatever it is he has to say about music is right, right? Surely a man who produced classics like “Heroes”  knows what a manipulated voice sounds like, yeah? He’s definitely not saying anything of this nature because he’s appearing on the second season of a British reality show called Guitar Star which sounds like American Idolbut with long-haired old men who want to teach the aspiring shredders of America how to be the next Hendrix, or whatever.

“You turn the radio on and it’s fluff, you are listening to 90% computerised voices. We know Adele has a great voice but it’s even questionable if that is actually her voice or how much has been manipulated,” Visconti told The Daily Star. “There’s a sound to pop now that is so perfect it’s boring, because everything is fixed.” 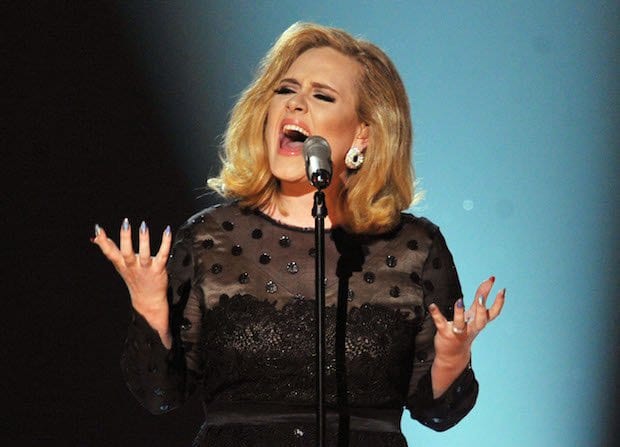 While I’m sure Visconti is referring to the prevalence of Autotune abuse in pop music, he’s also being kind of a dick. Out of all the celebrities to throw under the bus, why pick Adele? Is it because she’s very talented and therefore successful? Is it because her voice is too good? Or, is it because she’s a woman who sings the kind of songs that end up played to death at your local Starbucks and parodied on SNL because new music from Adele is greeted with the kind of fanfare and breathless stanning that really sick guitar dudes rarely recieve?

As evidenced by the above, Adele’s voice is, uh, just what it is. Really good. Powerful. Strong. Loud. If she can sound that good singing in an NPR office surrounded by books and a clutch of interns while sitting on a stool, then something tells me her instrument isn’t altered. But, sure, Visconti. Talk that talk. When asked what, precisely, he’ll be looking for on Guitar Star, he said ““I’m looking for virtuosos like Hendrix, Cobain and Bowie.“There’s no fluffy back story, there’s no: ‘I lost my pet dog in 97 and that made me want to play’ nonsense.”

Mmmm, yeah. Give it to me straight, Tony. Give me all that gritty guitar rock that men are only capable of because women have ijggly feelings. Give me that Tom Waits frog-voiced bullshit. Give me “raw” without “soft.” Give me men! Fuck women, right? And certainly fuck Adele. No way she can do both.

Will Bernie Sanders Be Hillary Clinton’s Vice President? Here’s Why It Is Not Very Likely