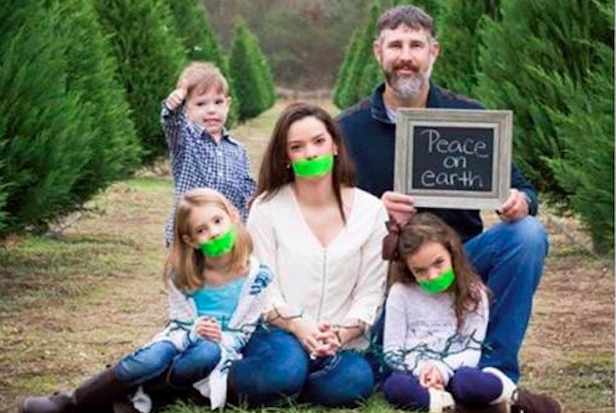 I first saw the photo above come across my feed when a friend posted it. Soon, it was popping up everywhere. A disturbing family photo, this one went straight past “awkward” or “silly,” and right into “creepy,” “terrifyingly sad” and “nauseating.”

The photo shows a family of five, seated in an idyllic meadow. The mother and two little girls have their hands bound with Christmas lights, and their mouths are sealed shut with thick strips of green duct tape. A small boy, clearly the youngest child, flashes a cheeky grin and gives the thumbs-up over their shoulders. He’s standing next to his seated father, who also grins and holds a chalkboard up for the camera to see.

It reads: “Peace on Earth!” The photographer, of Hannah Hawkes Photography, captioned the post on her page “Finally! Peace on Earth.”

The message is clear. The women have had their mouths forcibly closed, and their hands tied. Finally, father and son know peace! No annoying women can be heard, and they can’t move either. Toss ‘em in a closet and you don’t even have to see them. Such bliss!

Many commented, letting the photographer know they found the photo inappropriate. Other commenters defended the picture, saying it was cute and people were being “too sensitive.” The photographer, meanwhile, says the picture was the family’s idea, and she meant no harm – she certainly doesn’t promote violence against women! Hawkes eventually deleted the photo and posted a non-apology apology following the mild Internet uproar:

After being silent, now isn’t that ironic, I would like to speak! I have been called every name in the book, and have received some very hateful and vulgar comments and messages. I would like to say that as a female I do NOT and have never promoted violence to women! I do not support abuse, or the degradation of women. My controversial photo was taken by request by the family, and was in no way meant to promote abuse. This photo was taken with humor in mind, and was meant as a comical Christmas photo. I personally know this family, and have known them for many years. They are not abusive to their children in any shape or form. Also, I would like to add that no one was harmed during the process! So everyone have a very MERRY CHRISTMAS and MAY GOD BLESS you and yours!

It seems likely, or I very much hope it is, that this is an attempt at a “joke” gone awry. Certainly it’s in poor taste, but hopefully the little girls are not suffering from ripping off the painful duct tape, or the utterly bizarre experience of being tied up with Christmas lights, or from hearing the message: “Actually, the world is more pleasant when your voice isn’t in it.” Because that is the overall message and theme of this photo – women are better silent and unmoving than talking and taking action. That is what these girl are being told, even if you think this joke is “cute.”

The little boy wasn’t bound and gagged for the photo. Nope, he is placed in a prime position for subjugation, standing, triumphant, grinning next to his equally free father. Mom is tied up and duct-taped too, so this isn’t about parents getting a little “peace” from their wild children.

If you recall, just a few weeks ago, a woman who posted a photo of her dog with its mouth duct-taped shut — captioned “This is what happens when you don’t shut up!” — was roundly roasted by the Internet after the photo went viral. The entire web seemed in agreement – this woman was a complete monster for putting duct tape on a dog’s muzzle like that, for a lot of reasons, including how painful it would be when ripped off. 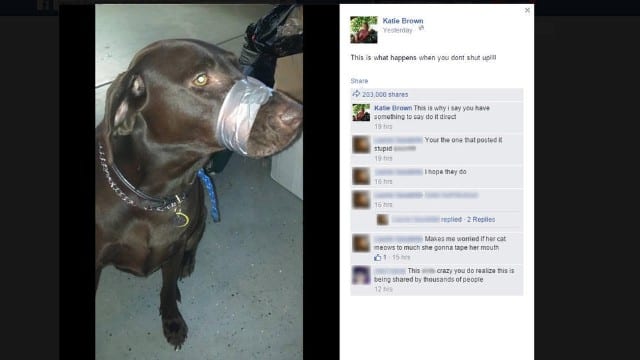 She was brought up on animal cruelty charges in a court. Virtually no one on the Internet defended her actions, at least not publicly, though she later defended herself by saying the tape was “only on the dog for 60 seconds,” the implication being that she was “joking” too.

Nevertheless, this woman was rightly chastised for abusing her dog. That’s what it was called. Abuse.

People who commented to defend Hawkes’ family photo certainly didn’t think the girls were abused. They said, in fact, that the family was wonderful. The children and mother are happy, not abused. The picture was their idea. Perhaps the family was just overzealous in their attempt to create a perfect Pinterest moment, and went too dark.

I have to ask, why is this dog’s life worth more than the two little girls and their mother? Why is duct taping a dog abuse, but duct taping the mouth of a little girl while her father and brother grin in triumph is a hilarious joke?

It’s incredible to me that the lives and happiness of women can be viewed as so worthless, and so sad to me that some can’t even see that that’s precisely what this picture conveys. I’m sure these parents love their children. I hope they realize this little holiday portrait was a mistake and learn from the criticism. I hope those little girls – and their mother – don’t absorb the message that it’s better for them to be silent. I hope they grow up to be strong, carefree and always ready to share their thoughts, views – and truly hilarious jokes of their own.

So Here Is A Video Of Carly Fiorina Eating Dog Food…

Comprehensive Guide to Looking Your Best in Family...