Do Positive Self-Talk And Affirmations Really Work? Here Are 10 Things To Know

The concept of affirmations is easily one of the most mocked (and supposedly one of the most effective) aspects of the self-help world. While there have been times when they’ve worked for me, there’ve been other times where they felt like a total waste of time. It’s not a cure-all for major blues or definitely doesn’t take the place of therapy or other forms of help, but positive self-talk habits like switching up my inner monologue and forming a greater sense of appreciation has made me a much happier person over time.

That said, I’ve had plenty of moments of skepticism when it comes to affirmations. I’d shelved the affirmations thing altogether when a report by NPR’s Laura Starecheski pointed out a slew of scientific research-based reasons they may have failed me in the past. Turns out, there is a specific right and wrong way to go about it, which prompted me to do a little research into small adjustments and truths that might make positive self-talk more worth your time. If you try them out, report back on whether they make a difference! 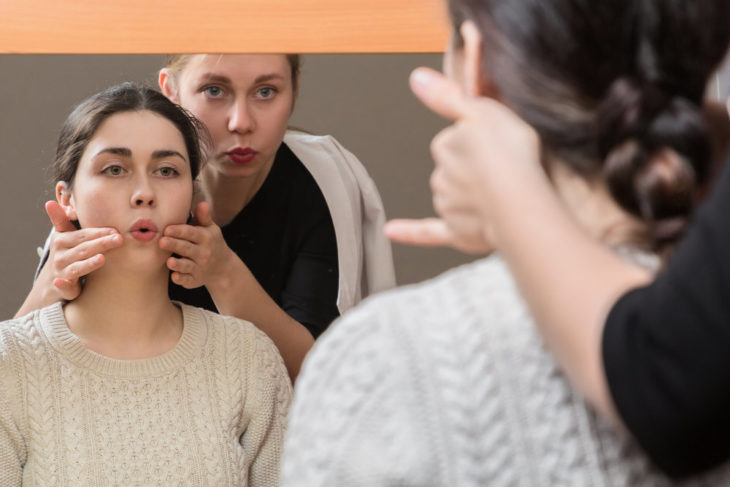 the doctor helps the girl to pronounce the right sounds of words.

1. Speak aloud into a mirror

2. If you hate something about yourself, try using neutral language to describe it

It’s awkward to blatantly lie to yourself about loving a trait or body part that you hate, so don’t do it. Start off small by first switching from a negative attitude to a neutral one. If you aren’t crazy about how you handle work or school, for example, start with switching your phrasing from “I’m lazy and stupid” to “it takes me longer than I’d like to get motivated to study sometimes.” Once you get used to shedding the negativity, it may feel easier to start thinking positive thoughts.

3. Remember that your brain’s perspective of your body doesn’t always match reality

Our brains have an internal view of our body’s essence, and that view is not always correct. A study in the Netherlands found that women with eating disorders would angle their bodies to “fit” through door frames despite having plenty of space. Another study from the early 1900s found that women who were accustomed to wearing large hats instinctively ducked in door frames even when their heads were bare because they envisioned their body as always having a hat on. Positive self-talk can help recalibrate a negative internal view of your body to match your (lovely) outer appearance.

4. Speak in the third person instead of using “I” statements

When you use “I” statements in your affirmations, you might find yourself getting stressed out about the heavy expectations you’re putting on yourself or about the fact that what you’re affirming is so different than what your life actually looks like right now. Referring to yourself in the third person allows you to create distance between you and the situation and helps you to be more objective. When people refer to themselves by their names, they tend to visualize themselves from an outside point of view as if they’re someone else, or a fly on the wall. It’s a strange phenomenon, but it makes it much easier to be kinder to yourself and think clearly about the situation.

When you catch your thoughts boarding the cranky train, say “Stop” aloud to put them to rest mid-sentence. I feel hypocritical telling people to do this because I sorely lack the balls to shout “STOP!!!” in the middle of my office or on the subway, but you don’t have to be a wimp just because I am. At least try it when you’re at home! When people set out to improve their lives, they tend to think about what they don’t want to experience anymore. Most of them are fed up with feeling stressed or incomplete, and that becomes the focus of their self-improvement goal. Instead, map out what you’d like your life to be like in the place of all the awful stuff that you plan to shed.

7. Stay aware so you’ll recognize projections from your past and “absolute” statements

As we know, most of us tend to poison our present with guilt and anxiety from our past or fears about the future. Lots of this is subconscious, and it sometimes takes a good therapist to weed it all out, but being aware is the first step to noticing when you’re projecting and knowing to take it with a grain of salt. Just because you got dumped that one time does not mean you’re a horrible partner or that you’ll only date guys who will end up dumping you in the future. Just because you let down a good friend years ago doesn’t mean you’re an awful person who doesn’t deserve happiness. In this same vein, avoid using “absolute” phrases like “I’ll never___” or “I always___” to describe negative things. They’re dismissive and make you feel like you’re incapable of progress.

Spend about five minutes on affirmations, three times a day. If you can’t get that much alone time in front of a mirror, consider journaling them one time a day. Repeat them in your mind while you’re falling asleep to help ingrain them into your brain.

9. Look for themes in your anxious thoughts

Write down all the things you consider to be flaws in yourself and the negative thoughts you most commonly have. Try to find a recurring theme within these, like a feeling of unworthiness or a fear of abandonment. Replace that theme with a new, positive one. See if it feels like you carry that negative feeling in a certain part of your body (you may find it through things like shoulder tension or stomach pain), and touch that part of you when you recite your affirmations.

Just like exercise, positive self-talk takes a while to create change. It usually creeps in so quietly that you hardly notice until one day you wake up and realize you feel a hell of a lot better than you did a few months ago!

9 Expert Tips to Maximize Your Workout

6 Reasons to Fall in Love with Wood Furniture