Do Something New: Write A Prisoner

I credit my fiancé, Michael, with any knowledge I have about prisons, prisoners, and prison justice. Early in our relationship, he told me that he was fascinated with criminal justice after watching “The Wire.” Then it was serial killers, and over the course of years that’s morphed into an insatiable passion for information about our prison system. He’s read prison letters and poems, is working his way through The Last Words of the Departed, gladly accepted when I bought him a copy of The New Jim Crow, and now can speak fluently and knowledgeably about mass incarceration, the corruption of private prisons, prison gangs, the scourge that is the drug war, minimum sentences, the taxpayer cost of life imprisonment, why the death penalty is both theoretically and practically just wrong.

It was an issue I’d never lent too much thought in the past, being more concerned, myself, with matters of sex and gender. But they intersect, as all things do: Trans* rights in prison are a huge issue. Poverty and employment outcomes interact with crime and violence as much as they do with gender. It’s important to figure out exactly what justice looks like in sex offense cases. Motherhood and imprisonment meet in heartbreaking ways. Prisons tear families apart. And on, and on.

So when I started brainstorming new things I could do, Michael suggested that I should write a prisoner. I had to address something that’s uncomfortable: I believe that the prison system is corrupt and unjust, that it doesn’t serve society, that it’s basically a free labor system, that it’s making a lot of money for prison corporations, that it doesn’t rehabilitate criminals, that it intentionally targets the Black community, that it is unequipped to deal with mental illness, that it rehabilitates almost no one. But I also have had it hammered into my head that people who go to prison deserve whatever they get, that they are legitimately dangerous to even speak to.

Anyone who writes a prisoner has to get over that feeling at some point, because ultimately a prisoner is a human being who’s stuck in isolation, not a carbon-based manifestation of whatever crime they committed. And it turns out that prison pen pals can very positively affect a prisoner’s outlook, because it gives them a connection to the outside world, makes them feel validated as human beings, and improves their hope for their life once they’re out. It also protects them within the prison by communicating to guards who might abuse them that they have contacts on the outside who will advocate for them.

One of the topics I enjoyed the most in Jon Ronson’s So You’ve Been Publicly Shamed was an interview with Judge Ted Poe, who was notorious for sentencing criminals to public shamings of various levels of creativity. And even though it seemed like a spectacle, Poe said that it worked: 85 percent of the people he sentenced to a public shaming never darkened the doors of a courtroom again, because it was too embarrassing the first time. But beyond that, one of Poe’s shamees told Ronson that his sentence – to stand by the side of the road with a placard reading “I killed two people while driving drunk” – was effective because it made him accountable to a community that understood that people screw up: He said that “ninety percent of the responses on the street were ‘God bless you’ and ‘Things will be okay.’” That shamee, Mike Hubacek, went on to serve his community by founding a halfway house. That’s the kind of acceptance you don’t get when you’re isolated in a prison, but that isolation can be ameliorated, and that acceptance can be granted, by pen pal programs. 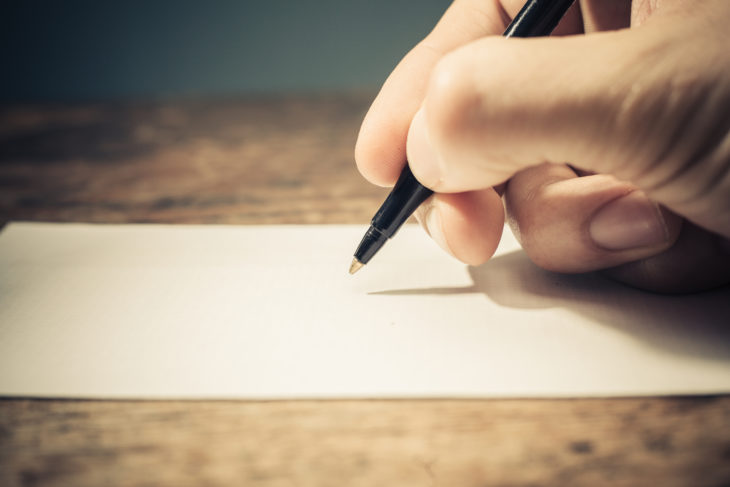 Advocacy group Black and Pink provides a really good list of things to consider and guidelines to follow when you write a prisoner, though I found the woman I wrote through Write A Prisoner. She was convicted on a charge of possession with the intent to distribute – she had had about an eighth of marijuana on her during a raid of a home she shared with two other people who were also arrested – and she was sentenced to nine years in prison. She said she liked to write, so I introduced myself, asked her what she was writing, told her about my job, and drew her some flowers on the inside of the card, because I figured that prison probably isn’t super-colorful.

She hasn’t written back yet, which is normal – letters can get lost, prisoners can get transferred, and it can simply take a while for a letter to get to a prisoner in the first place, all of that not even mentioning the fact that the person you write may not want to write back. But the main thing about writing a prisoner is that it’s a kind thing to do for them. Getting mail feels good, beyond all the other advantages of receiving mail in prison. As a pen pal, it’s not a bad idea to write a few different people, although it can apparently be an emotionally taxing process sometimes, and that’s worth considering. But prisoners are members of our communities, and they deserve a connection to the community that shaped them and that they want to return to. It’s well worth the effort to just sit down and write.

Do Something New: Try Tantric Sex