Exploring the Largest Cave in the World, Hang Son Doong

Adventure photographer, Gregg Jaden, started photography as a way to connect to mother earth and continue along his spiritual journey. In 2009, he had a near death experience in a car crash that took him to the other side and back. After 5 brutal years of recovering and healing,  his life was given a second chance.  He traded in his C-Level Marketing Executive career for a life of Travel Adventure Photography.

He had a massive passion for the less explored places and discovered one in Vietnam called Hang Son Doong. It translates to mountain river cave. “I had this burning desire to go there. National Geographic had been a year prior and I saw some breathtaking images. My jaw dropped and all I could think about was creating a reason to go on the expedition” says Jaden. 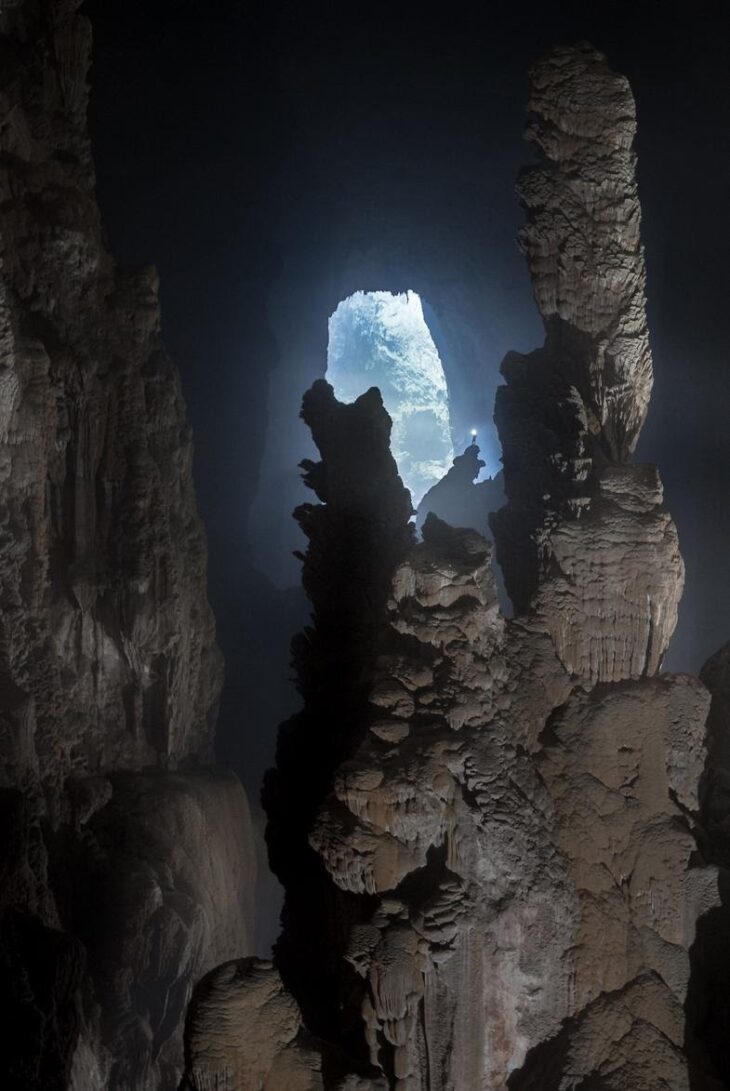 He did a year of research and planning for this expedition. It is a crazy expedition. It is 5 days off the grid. Carrying a 70 lb backpack full of camera gear and other essentials. It starts with being dropped off on the Ho Chi Minh highway in the middle of the Vietnam jungle.It is the last time the group will see air conditioning, or any civilization, other that themselves for the next 5 days. The group treks around 10-12 km per day through approx. 47 rivers and 3 days just to get to some of the most epic photo opportunities. It is a serious trek. Avoiding deadly venomous green viper snakes and countless leeches just to get to see this one of a kind place. After day 2 finally at the entrance of the cave the only way into the cave is a 90 meter repel by rope in the dark. The explorers have headlamps to light their way.

“We had spotters go ahead of us and all their job was to look for green vipers in our path. We came across a couple green vipers and kept our distance. If one of us got bit it could’ve been deadly and we are a hundred miles from any civilization. When we say the snakes we just kept our distance and had to wait for it to slide across our trail after a 10-15 minutes of it realizing we weren’t a threat” says Jaden. 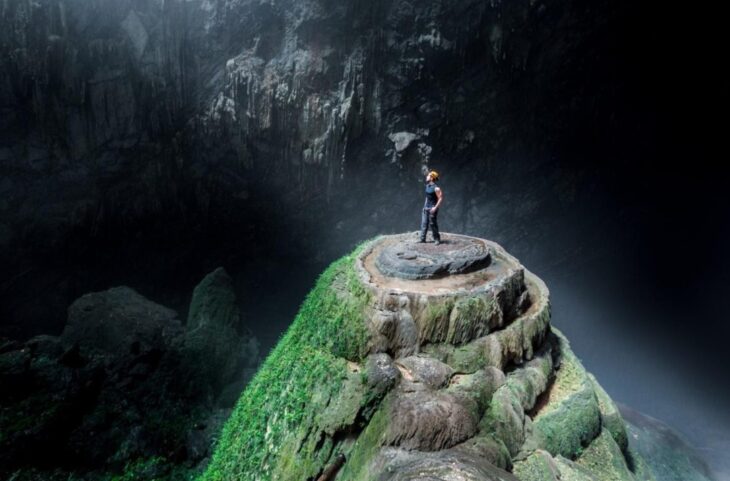 This village is one of the most bombed places on earth from the Vietnam war. Not only avoiding the leeches and snakes but there are many live mines throughout the village. One wrong move and its game over. “We were very strict and stayed on a very specific path to the cave. We had to stay together and not stray off. You don’t want to be lost in the jungle by yourself. I actually found some bomb parts close to our path. It was surreal being in a place that had so much devastation for almost 2 decades of war” says Jaden.

The training for this expedition was a lot of rock climbing and hiking for months before with heavy backpacks to build up stamina. Hiking in the extreme heat of the jungle can be grueling. The group of explorers have seen strong athletic men pass out from heat like that in the past. Fortunately, Gregg Jaden’s group made it safely. “We stayed hydrated and ate electrolytes whenever we felt shaky. The constant potassium from that and bananas helped us maintain our strength. The jungle heat has a way to catch up to people who aren’t used to that kind of heat. Strong athletes can become weak in a moment’s notice and bam they drop without notice. I made a point of going a couple weeks early to climatize to the jungle heat” says Jaden. 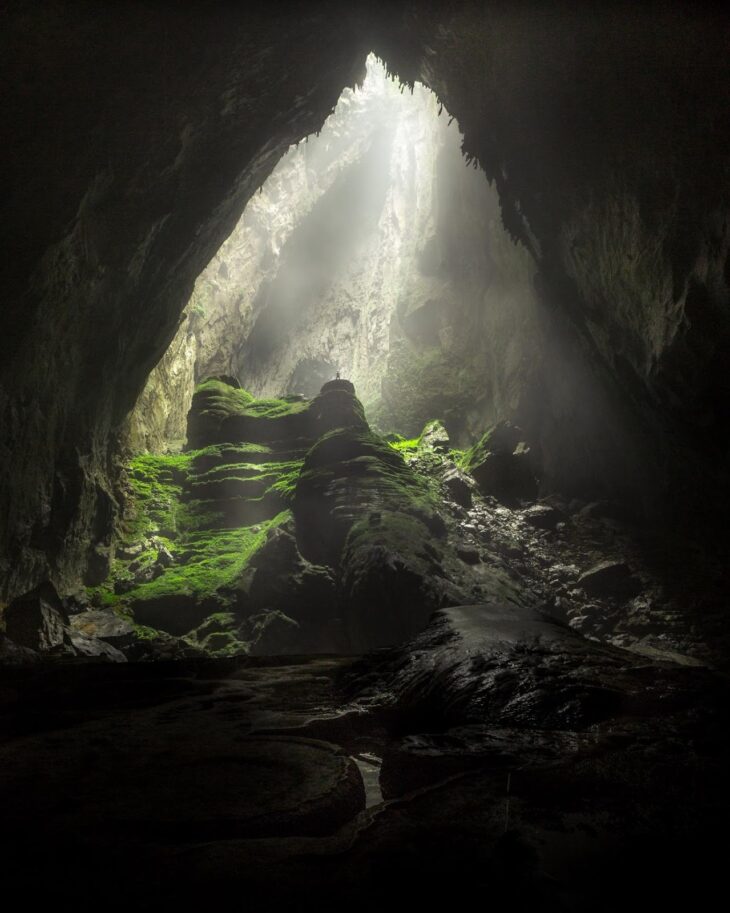 This cave is cherished by the local Vietnam villagers and the Government. There are strict rules and regulations to protect the ecosystem for anyone planning this expedition. There are limited permits each year and the maximum number that can go through the cave is 10 explorers. Two government officials also accompany the groups to ensure ecosystem preservation.

The group did 6 months of training before the expedition. Training prior to the trip involved regular rock climbing, hiking, weight training and diet. In fact the group is in harness 3 out of the 5 days for the amount of rock climbing and bouldering involved to get through the cave. “We had a safety briefing the night before and days prior to our trek. When you rock climb in the dark it changes how you look at things. I guess the advantage in some way is you can hear rushing water at the bottom of the cave with a 200 meter drop but couldn’t see it. Our headlamps can’t see that far but we were extra careful clipping in and out while moving across a narrow ledge. 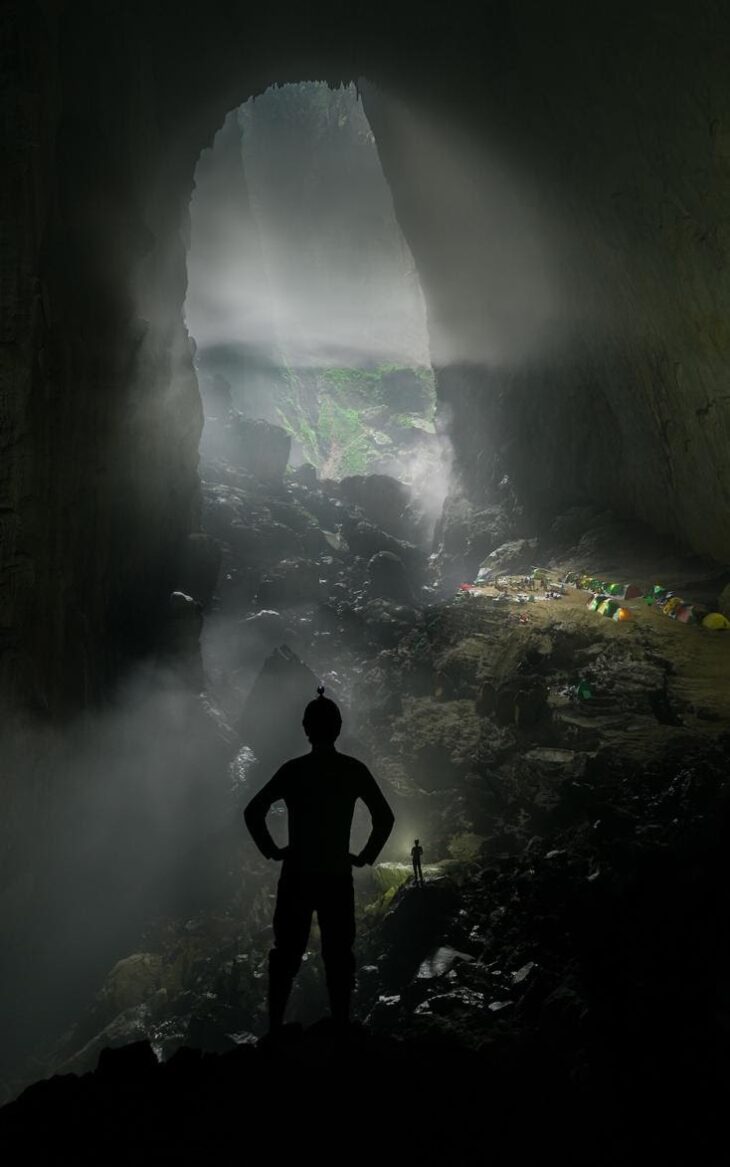 The cave was originally discovered in 1991 by a farmer Ho Khanh who was taking shelter form a storm while hunting for his family. Ho Khanh couldn’t remember where the entrance was as it was buried half way down a mountain and all you can hear is rushing water below in pitch black darkness. He worked with experts of the British Cave Research Foundation for years to find that opening. Finally, in 2009 it was rediscovered and the cavers were allowed to repel down and explore it. The dimensions are enormous, it is 656 feet wide, 492 feet high and 10 km deep. Large enough for 2 Boeing 747 jet planes to fly side by side through the entire cave.  After a few years to ensure it is safe for others to explore, only carefully planned expeditions were allowed.

With any expeditions some of the challenger are: 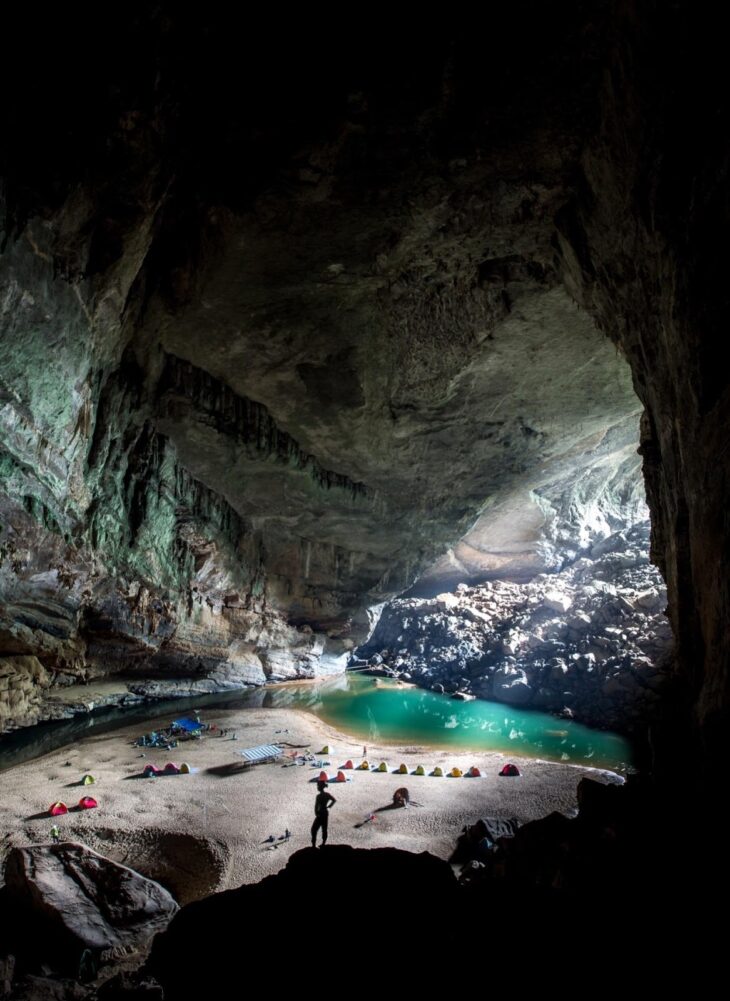 Here’s what 5 days off the grid looks for Gregg and his team:

After reaching in the center of the Vietnam jungle, the team began their trek from the downhill trailhead for around 2 hours. The beginning of the trek was a bit challenging because the surface was quite sharp. After half an hour, they outreached to the village, Ban Doong. It was a mesmerizing point of the location, and they explore people and their culture. They enjoy a small break of lunch near a beautiful river.

It was a hard-to-survive place for people living there because they have to live on trees during floods. After that, they crossed the river and had wet feet all the time. It was a slippery, risky and tiring thing. In the end, they finally reached the entrance, known as Hang En Cave and set up their camp for rest.

The team woke up at 5:45 AM and passed the entrance by walking for an hour with wet boots. It was quite challenging because they have wet feet all day, and they cannot even do anything to get rid of it. But, simultaneously, it was fun because they were experiencing new and adventures.

After a walk of 1 hour, they started climbing the mountain for two hours. They had lunch and prepare themselves to explore underground. They climb mountains and crossed rivers with different levels of water. Now comes the careful part; there were significant drops and risky zones that are challenging to pass. The team reached Son Doong, their first campsite near 4 PM.

After breakfast at 5:45 AM, they started their journey to Watch Out for Dinosaurs bypassing steep mountains. It took near 1.5 hours to reach the place, and they continued to Green Do-lines after resting for a while. They began a trek to the jungle inside the cave with beautiful and scenic views. After 1 hour, they reached to the second campsite, i.e., Son Doong Cave.

After a short break, they proceeded towards the Great Wall of Vietnam. They experienced big stalagmites when they were continuing to the second doline. The team got species like white spiders, shrimp, fish, woodlouse, etc. They reached the muddy pithole, i.e., close to the Great Vietnam Wall.

Again at 5:45 AM, they returned to the first doline by passing from the small oxbow, located over the underground river. There was nothing visible, and they used safety lines and ropes to land safely. They reached their initial campsite at 11 AM and then they continued to old coral fossils. After lunch, they moved to the entrance by crossing the river and climbing 295 feet rock.

In the final day, they trekked for 10 Kms and reached to Ban Doong village, from where they started the adventure. After 2 hours of the expedition straight up a mountain, they reached Ho Chi Minh highway, from where they picked up and taken to the farm stay for a massive meal to celebrate and rest after a long journey.

This experience of the adventure was quite hard to express. The message from Jaden is to follow your passion and experience as much as you can in our lives. These experiences will remain forever in their hearts, and there will be no regrets in the life of the explorer. For detailed information.

How to Pose for Wedding Photos