First Time For Everything: Attending A Sex Toy Party

I’d been invited to three adult novelty parties via Facebook. The first two I skipped, but decided the third time was a charm. You see, I’m a scientist, a doctor, with the capacity to deduce conclusive results from my experiments, even failed ones. After my divorce I concluded that a successful relationship requires me to think of what I can give to a partner both emotionally and sexually, rather than focusing solely on what he could give to me.

That’s what sent me to a relationship seminar about sexuality and spirituality. It’s also what solidified the decision to say yes to this party. I am in a new relationship, considering spending the rest of my life with a man and his two children. I figured, subscribing to my friend’s philosophy: “You must try everything once or you’ll die stupid.” Besides, alcohol, food and sex talk with a bunch of strangers didn’t sound like a bad way to spend an afternoon. 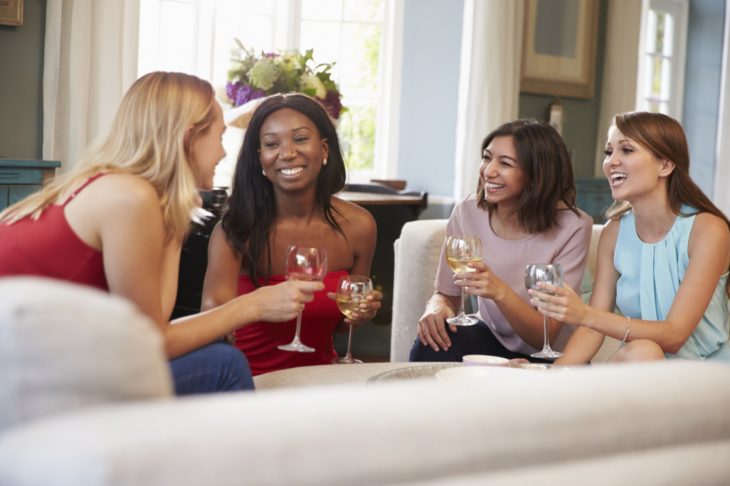 I am the last to arrive at the sex toy party. A group of 15 women are waiting for me. They are sitting around the room plus the head “Goddess” (as she calls herself) of all products sexual. Based on my research, these parties are thrown to empower women. Here’s to empowerment!

As soon as I take my seat, the Goddess hands me two catalogs: the standard one along with the new … get ready for it … Christian Grey edition, complete with a headless picture of a buff male torso glistening in oil.

“Before we start,” she announces, “I need you all to take out the naughty act card in your booklet and put your name in the blank. You will take turns reading your card to the group.”

I look at my card, only to realize I’m not the sexually open tigress I had thought. The first two women read theirs. Neither is as mortifying as mine. 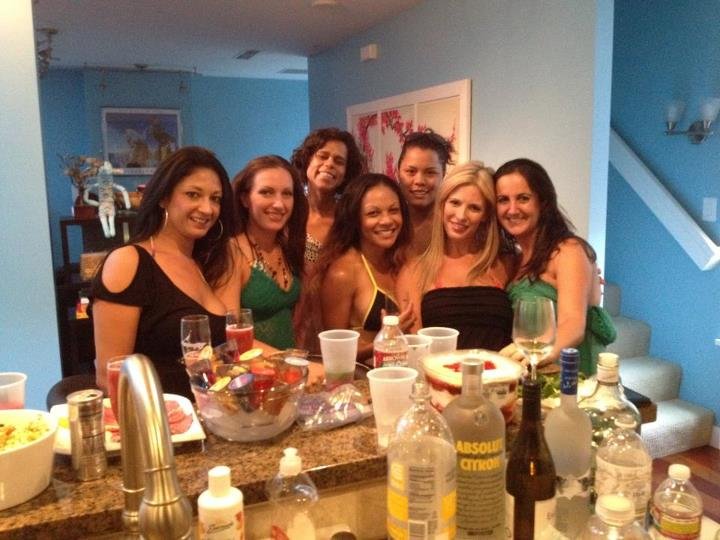 “Go ahead,” says the Goddess.

I giggle through the last part. I’m not sure what feels more embarrassing, what I am forced to announce or the fact that I am giggling like a schoolgirl. The road to empowerment … one giggle at a time.

Then the Goddess begins to demonstrate her products one by one, starting with the most popular, the Coochy Cream. As it turns out these creams and sprays have multiple uses. For instance, the aforementioned cream can be used for shaving, conditioning your hair down there, plus removing makeup on your face. And your man can use it too! Just peel off the label to prevent his bewildered protests. This session ends with some potion that contains pheromones. Except, it’s hard to know if they are the types that synchronize women’s menstrual cycle, the ones that make children recognize their mothers, or the sexual types. I say this because once we all put a drop on our skins the hostess’s female dog starts barking and commences chasing its own tail.

By now, without physical movement, the room is divided into two groups. One corner belongs to the 20-somethings quietly staring at the 40 and above women who can’t keep their mouths shut. Our group has married-for-many-years members trying to spice up their relationship, mothers whose kids are the only reason they’re still in their marriages, and yours truly, the woman aiming to be a hellcat in bed post-divorce. I wouldn’t want another relationship to fail for lack of sex.

The Goddess moves on to the next set of items — the toys. She demonstrates an array of vibrators and quizzes people on the different types of orgasms. Now she has our attention. The collection of toys covers the entire pelvic region, front to back. We learn that anything used in the posterior region must have a base to prevent unwanted displacement and subsequent visits to the ER. I remember the radiographs I had seen during my residency with different objects, such as bottles and in case of a prisoner, even a gun, lodged in the anus. But I digress. One particular tool, the Maven, proves to be most engaging. For $57 you can own a fleshlight that will do the job of your mouth for him. Plus there is no mess to clean. It all happens in the sleeve. He merely removes it, flips it inside out and washes it. Somebody quips: “Well actually he never washes it. You do.”

I only notice one or two items for couples. These silicone pieces seem to take away from the experience of togetherness. A plastic sleeve? A silicone penis? What happened to direct love play with each other? “Well, you haven’t been married long enough,” one woman advises sagely. If she only knew.

Next up is a special cream named Nympho. The hostess volunteers me to try it. I go to the bathroom and apply a pea-sized dab of the magic cream to my clitoris with a cotton tip applicator. It is supposed to stimulate the nerve endings, thereby filling you with desire.

“Just put it on before you get into your car and Oh My God, you’ll have a heavenly drive,” the Goddess explains.

With high hopes I walk in, follow the instructions, and return to my seat with my magic clitoris. After a few minutes a Bengay-esque sensation kicks in, leaving me struggling to find a position for my legs that would decrease the burning. I settle on an open leg, not at all ladylike position, feeling nowhere near an orgasm.

In the end, the Goddess of all products sexual, packs her floral, carry-on suitcase with the samples we have been smelling, feeling and tasting and goes up to the bedroom, where each woman meets her to order products privately. I don’t understand the necessity of hiding after we read those naughty act cards out loud.

As the guests leave for the private room, we break into clusters. Here, with inhibitions dropped, either from the cheap champagne or by the safety of the surrounding feminine energy, deeper truths emerge. Some joke, others share. One woman takes me to a corner to confide about her lack of love for her husband. “We used to do it everywhere, outside the house, inside the house, in the car, whatever, and now I can’t stand him kissing me.”

Another responds: “Ugh, no thank you,” to an item that may prolong a partner’s erection.

The married women choose options that will fend him off, or not involve him at all, rather than ones that will bring him closer.

Their comments take me back to how my marriage fell apart after eight years. We just faded away, stopped touching, stopped talking. And how, afterwards, I thought I had it all figured out, as if one divorce builds immunity to others. At least in my case, it should. But now my scientific theory is disintegrating into bits. My brain hums in overdrive. Why did I come here? Is it to prove I can handle all these gadgets? Am I under some pretense that extra toys may make for a spicy, therefore long-lasting relationship?

On the drive home, the heavenly effects of the Nympho cream wearing off, I wonder if I’ve got it all wrong? What if the most committed relationships eventually end in ugh because we belong to a species, whose natural tendencies towards polygamy, have been suppressed by societal rules? What if no matter how strong the attraction, how amazing the chemistry, how unique the connection, the long-term-ness that kills it for couples? The failure of the system comes not from the paucity of initial chemistry or connection, but the sameness of it, even in the face of abundance. Sure, 50 percent of marriages still stay together, however, studies reveal a large number do so for the sake of kids, out of fear, or for financial reasons. What if marriage, as an institution, follows Marshall McLuhan’s law of reversal? Like any medium it initially enhances our lives but imbued with too much regularity, it simply overheats and reverses on itself ending in death by enthalpy.

What I really mean to say is: What if I fail again?

By the time I arrive home, I am far from being empowered. Cursed rather than blessed by the Goddess, I feel an impending sense of doom with the realization that “till death do us part” inevitably results in a stale sex life. And once there, no amount of elaborate parties or divine toys will have the power to remedy it. The Goddess needs a new slogan: “Come to be empowered, leave feeling fucked.”

Would You Wear Hair Tattoos?

10 Signs You May Be An Emotional Tampon